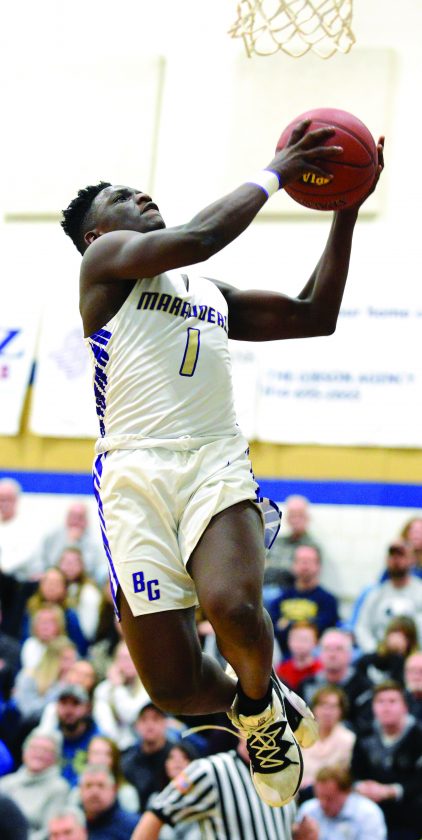 Mirror photo by Patrick Waksmunski Jessiah Witherspoon goes up for a layup for BG.

The middle part of the game was competitive enough, though, that the Marauders couldn’t just go on cruise control all night.

Top-seeded BG was up just 12 points early in the third quarter before getting hot again, then destroyed No. 4 seed Homer-Center at the end for a 91-50 victory in the District 6 2A semifinals at Hollidaysburg Area High School.

“It was a good effort by all of us,” Witherspoon said. “We definitely executed on defense, we stuck to the game plan and we just got the shots off.”

Witherspoon scored 11 of his game-high 27 points in the first quarter to help the Marauders get off to a blistering start. He opened the game with a 3-pointer, picked up a couple of steals that led to transition baskets and led the charge as BG jumped all over the Wildcats.

“He’s terrific defensively,” BG coach Chris Drenning said. “He’s so quick, he’s so athletic going to the rim. When he gets in the open floor, he’s really hard to guard. He got a couple deflections — he’s so good at that — and that gets us out in transition where we want to be.”

Homer-Center regrouped after the 18-2 start, began protecting the ball a little better — which slowed down the BG transition game — and hung around for much of the next two quarters.

Homer-Center scored the first six points of the third quarter to trim the margin to 48-36. The Marauders had an immediate answer, however, as Kyle Ruggery hit a layup, Patrick Haigh a 3-pointer and Michael Montecalvo another 3 to balloon the lead to 20.

“After half, we came out and scored the first six points and brought it back to 12 again, but we just couldn’t get over the hump,” said Wildcats coach Bob Rado, who’s retiring at the end of the season but will get to keep coaching in the upcoming PIAA playoffs. “Any time we made a little run, they’d come back and combat that with a run of their own.”

The Marauders’ balanced scoring proved to be way too much for Homer-Center, and that along with their pressure defense and transition game will give them a good chance for a deep run in the state playoffs.

Haigh buried five 3-pointers to finish with 15 points for BG, while Montecalvo had 14 and Ruggery 12. Ten different Marauder players scored.

“It’s difficult to guard at any level,” Drenning said of his team’s balance. “A lot of times we have five guys on the floor who are double-figure scorers, or are capable of it, and that puts a lot of stress on the other team’s defense.

“We shoot it so well, it’s hard to play zone. And then if you play man, you’ve got to handle the penetration stuff. It puts a lot of pressure on the other team, and that’s why we’ve designed the offense the way we have to take advantage of that.”

Rado mentioned how BG is tough to prepare for with its high-scoring attack.

“It’s hard to cover those 3s, and when you come out on them, they drive to to the hole and then kick it back to the guy with the 3,” the Homer-Center coach said. “They’re a very good, well-balanced team. Well coached. Drenning’s been doing a great job for many years down there.”

The only issue BG faced was some stagnant half-court play at times in the second and third quarters, but that can be expected at times after jumping out to such a fast start.

“That’s what we talked about, trying to get out of the gate quickly and put some pressure on them,” Drenning said.