Getting some revenge: Lady Tigers take round two vs. Altoona 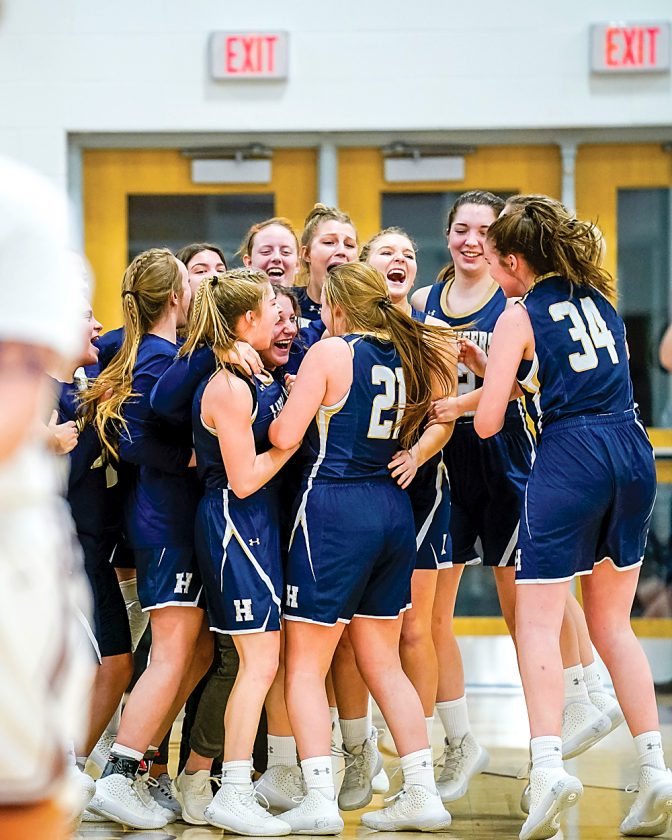 Photo for the Mirror by Chuck Meyers Hollidaysburg celebrates a hard-fought victory over Altoona at the Fieldhouse Monday night.

It seems as though Hollidaysburg has grown up a lot over the last month.

Freshmen Ali Hatajik and Sydney Lear played big roles, and sophomore Marin Miller led all scorers with 25 points, including 11 in the fourth quarter, as Hollidaysburg knocked off Altoona, 44-41, at the Altoona Area High School Fieldhouse Monday.

“This is a very resilient bunch,” Jubeck said. “They have been hit by the adversity bug time and time again all year long. They keep rebounding and bouncing back, so kudos to the leadership that we had out there today.”

Lear was starting in place of senior Allison Hileman, who is out with a knee injury. She scored seven of the Lady Tigers’ nine points in the first quarter.

“This is two games in a row that Syd has been thrown into the fire,” Jubeck said. “She’s really stepped up and is accepting her role defensively.”

Hatajik finished with seven points and 13 rebounds while helping to cancel out Altoona’s size advantage in the paint with Adaliz Corbin and Caranda Perea.

“It feels so good to win this game,” Hatajik said. “We have worked so hard for this, and everyone on the team contributed. Ever since Allison (Hileman) hurt her knee, we just got so much more confident, because we want to do this for her.”

Hollidaysburg took a four-point lead into the fourth quarter and held on despite not making a field goal. The Lady Tigers went 12-of-17 from the free throw line with Miller accounting for 11 of the makes.

“Marin is our leading free-throw percentage shooter,” Jubeck said. “Toward the end of the game, we want the ball in her hands. The girls did a great job of getting the ball back to her, knowing at the end of the game she would seal the deal from the line.”

Despite Miller’s free throws, Altoona managed to tie the game on a pair of Adalyn Cherry free throws with 35.7 seconds left. The Lady Lions got back into the game with the help of some inspired play from Nevaeh Gibson, who came off the bench in the fourth quarter and scored a basket and pulled down five rebounds.

“Nevaeh is a hard worker in practice, and she knows that when her number is called, she brings energy first,” Altoona coach Chris Fleegle said. “To get us back in the game, she was the difference maker. She had some offensive rebounds, a nice finish when she got a good pass and her defense was much better than what we were getting at the time.”

But with Hollidaysburg back on offense, Miller drew another foul and made a free throw with 19.2 seconds left to put the Lady Tigers ahead for good.

“Marin did a good job in the second half of attacking us on defense,” Fleegle said. “She got to the free throw line, and that was something I was really concerned with going into the game. With it being a close game in the fourth quarter and the ball being in her hands, she’s a tough guard, and she’s going to make her free throws.”

Altoona got the ball back with 5.3 seconds left down by three, and Corbin made a great pass three-fourths the way down the court to Perea, who fired up a deep turnaround 3-point attempt that was just long.

“Five seconds left, I can get one of my better shooters a pretty open look, and an inch lighter, we’re going into overtime,” Fleegle said. “That’s the way it falls sometimes. It was a great game in a great atmosphere. It’s just kind of the way things are going right now where we’re falling short in close games.”

The win gave Hollidaysburg its second impressive win in a row. The Lady Tigers beat a 15-win Mercyhurst Prep team on Saturday. Still, Jubeck says there’s work to do before the playoffs begin.

“There’s room for improvement,” Jubeck said. “We want to be playing our best basketball in two weeks.”