Chip off the old block: Klausman pilots Lions with dad on journey 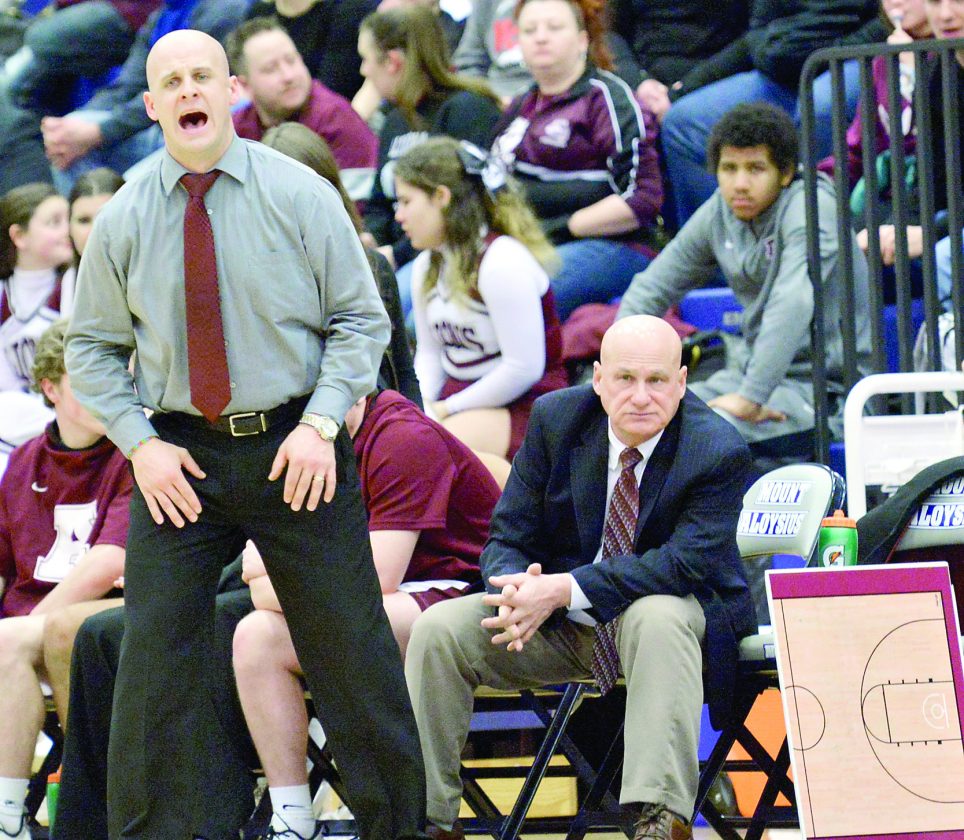 Jarrod Klausman has spent his life in sports, often alongside his dad, Jim. They were part of a championship team in Little League, including the prestigious Dean Patterson Little World Series, and later coached in the Hollidaysburg basketball program under Mick Pentoney and Brad Lear.

But of all their shared experiences, none matched the feeling each had during their embrace of the District 6 Class 6A championship Friday night after Altoona held off State College at Mount Aloysius.

“To win a district championship and the first hug coming from my dad,” Jarrod was saying after practice Monday night, “was emotional.”

Ditto for the old man, who took a basketball coaching hiatus for the last two years.

“To come back now, with Jarrod, and to see the success,” Jim Klausman said, “I’ve loved every minute of it.”

Altoona will meet Allderdice tonight at Brashear High School in the 6-8-10 subregional semifinals, and regardless of the outcome or how far the Lions go this season, it’s clear the Klausmans, along with fellow assistant Jason McGinnis, have gotten the most out of the squad.

The Mountain Lions’ record is 11-12, but they were quite competitive in the rugged Mid-Penn Conference and showed marked improvement as the season unfolded.

“We’re very proud of what Jarrod has accomplished here in a very short time,” Altoona athletic director Phil Riccio said. “Having his dad on staff with him adds to the family atmosphere within the team and athletic department.”

The staff bond set the tone for the team.

“They have a really good relationship, and every time we come here, they’re always joking around,” Lion standout P.J. Charles said. “We love to be here every day. It’s a positive environment.”

“Jarrod is a really good guy,” flashy guard K.J. Futrell said. “The way he brings his kids around, it’s an atmosphere you want to be around. I look up to Jarrod.”

Aside from his father’s tutelage, Klausman has been mentored by the likes of Art Taneyhill and Kraig Hetz as a player at Altoona and coached football and basketball for the Tigers under John Barton, Pentoney and Lear.

“You take bits and pieces from each,” Klausman said. “I’ve been lucky to be around not just great basketball minds but great people. I can’t say enough about Coach Lear – the growth he allowed me to make as an assistant, to run parts of practice, go to the coaches clinic at Myrtle Beach. He helped me get to the spot I am now.”

Klausman waited his turn. He was a finalist for the State College job a few years ago and at Altoona when Doug West was hired in 2016.

“To be able to come back to my alma mater has been great,” Klausman, who played college baseball at Richmond and Marietta, said. “These guys have bought in from Day 1.”

Growing up near Geesey Park, Klausman’s dad would hit him “400 ground balls every day” and before he could go swimming, “I’d shoot 100 free throws.”

“He pushed me but in a good way,” Jarrod said.

So when it came time to choose a staff, he first checked the dinner table.

His father has been around local baseball as a coach at East End and an umpire and now field custodian at the Altoona Little League for four decades.

“I try to use my wisdom of 40 years,” Jim said. “When you’re an assistant, you have a completely different job than a head coach. Good assistant coaches take care of things so the head coach doesn’t have to.”

After Monday’s practice, Jarrod and his dad jumped in a car and hustled to Tyrone to scout the Erie-State College game.

“I’d like to acknowledge my family,” Jarrod said, noting his wife Christie and three children. “They’ve given up a lot.”

But he said his entire family, including 86-year-old grandfather Willie Casalvieri, has enjoyed following the Mountain Lions this season, and that’s understandable since not one but two Klausmans have been driving the bus.