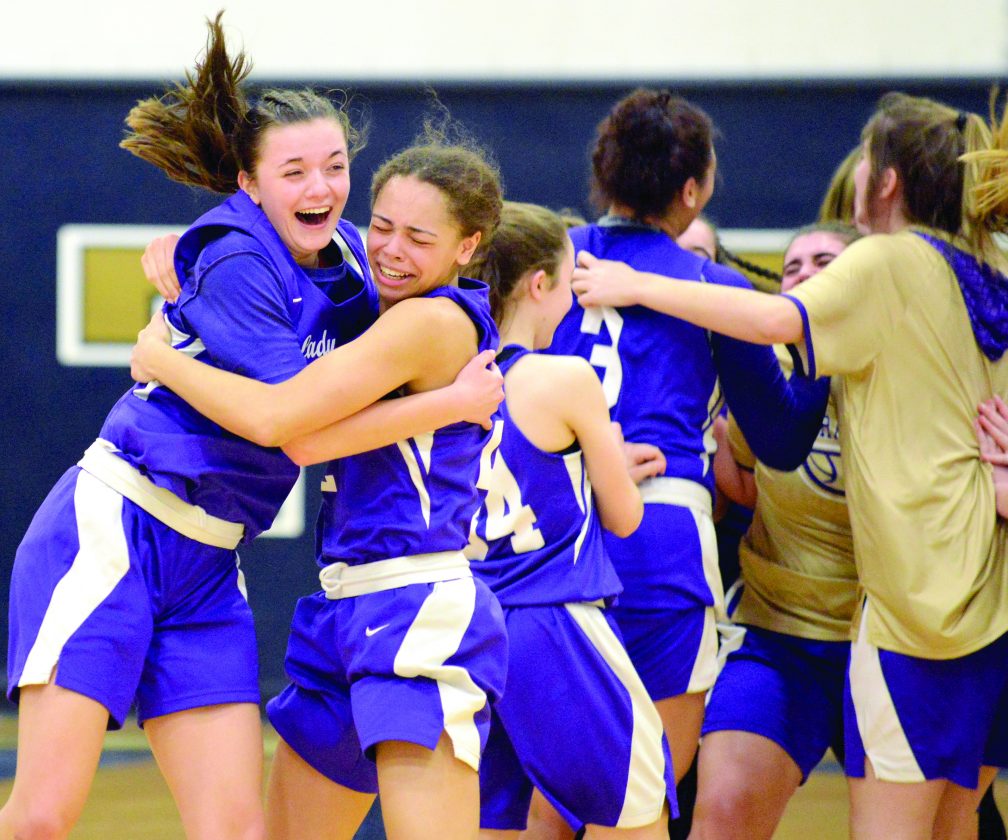 HOLLIDAYSBURG — As the old adage goes, life is tough at the top.

In fact, it can be downright brutal, with frontrunners in any capacity always donning a collective bullseye on their backs.

And for sports teams, there’s the pressure of upholding tradition, which can often become a particularly heavy burden in itself.

The two-time defending PIAA Class 2A state girls basketball champion Bellwood-Antis Lady Blue Devils have a chance to three-peat this March. But Bishop Guilfoyle Catholic, as was evidenced in the District 6 Class 2A semifinal playoff game between the two teams on Monday night, will certainly have something to say about that.

BG led Monday’s game from start to finish, and after Bellwood, displaying the heart of a champion, made a late third-quarter run, the Lady Marauders put the game away with a strong fourth quarter en route to a 67-54 victory in a jam-packed, deafeningly raucous Hollidaysburg Area Senior High School gymnasium.

Top-seeded Bellwood (23-2), also assured of a berth in the state tournament, will play sixth-seeded McCort in the third-place game Thursday at a site and time to be determined.

“What a game, what an atmopshere to play in,” marveled BG coach Kristi Kaack about Monday’s thriller. “We’re just trying to focus on playing basketball the right way, and getting better. The last couple of weeks, our kids have been doing that.

The 5-foot-9 Homan came up big all night for BG, scoring 15 points in the second half, including 11 in a fourth quarter that the Lady Marauders carried, 26-17, to stave off Bellwood’s comeback attempt.

“Leah Homan is a sophomore who doesn’t play like a sophomore,” Kaack said. “She’s not afraid to take the big shot, and tonight was her night.”

After a 3-pointer by senior guard Emilie Leidig pulled Bellwood to within 41-37 after three quarters, Warner scored on a putback, and Homan made two consecutive buckets — a 3-pointer from the right corner, and a nifty drive through the paint that resulted in a layup and a 48-37 BG spread with 5:14 left.

Bellwood could get no closer than nine points the rest of the way.

“I believe in our team,” Homan said. “It’s such a well-rounded team, and we worked together tonight. When (Bellwood) started coming back, we didn’t lose our composure, and we kept pushing and pushing. That was the key.”

Campbell did her utmost to attempt to will Bellwood to the victory, scoring all 17 of the Lady Blue Devils’ fourth-quarter points. But BG did a great job controlling everybody else.

“Even though our kids who guarded her did a phenomenal job, we knew that Alli was going to get her points — she’s that good,” Kaack said. “We focused on (defending) everybody else around her. We knew that we’d have to take everybody else out of the game.”

Bellwood coach Jim Swaney saluted BG — which held a 27-19 halftime advantage after breaking out to a 9-0 lead at the outset of the game on a 3-pointer by Warner and two more by Haigh — for an outstanding effort.

“BG played a wonderful game,” Swaney said. “They deserved to win. They were more prepared, and they played the game better. When we got back to within four, I thought we had a shot. But we just didn’t do what we needed to do to play championship-style basketball, and it showed.

“That said, Alli Campbell was fantastic — she single-handedly kept us in the game,” Swaney said.

Campbell pointed to the fact that BG converted 22 of 26 free throws and 19 of 41 floor shots.

“They were on fire,” Campbell said of the Lady Marauders. “They hit their shots, they knocked down their free throws, and they played harder than us tonight to get the win.”

Along with Homan’s 27 points, junior forward Teresa Haigh chipped in 15 and junior guard Sophia Warner added 10 for BG, which fashioned a 37-18 advantage on the boards. Senior forward Jamison Consiglio grabbed nine rebounds to go with Homan’s 11 for the Lady Marauders.

And now it’s on to the district championship game for BG.

“This is really rewarding for the girls,” Kaack said. “We ask them to put the work in every day at practice, and they’re doing it. It’s nice to see them get rewarded.”