BC wins 3rd title in 4 years 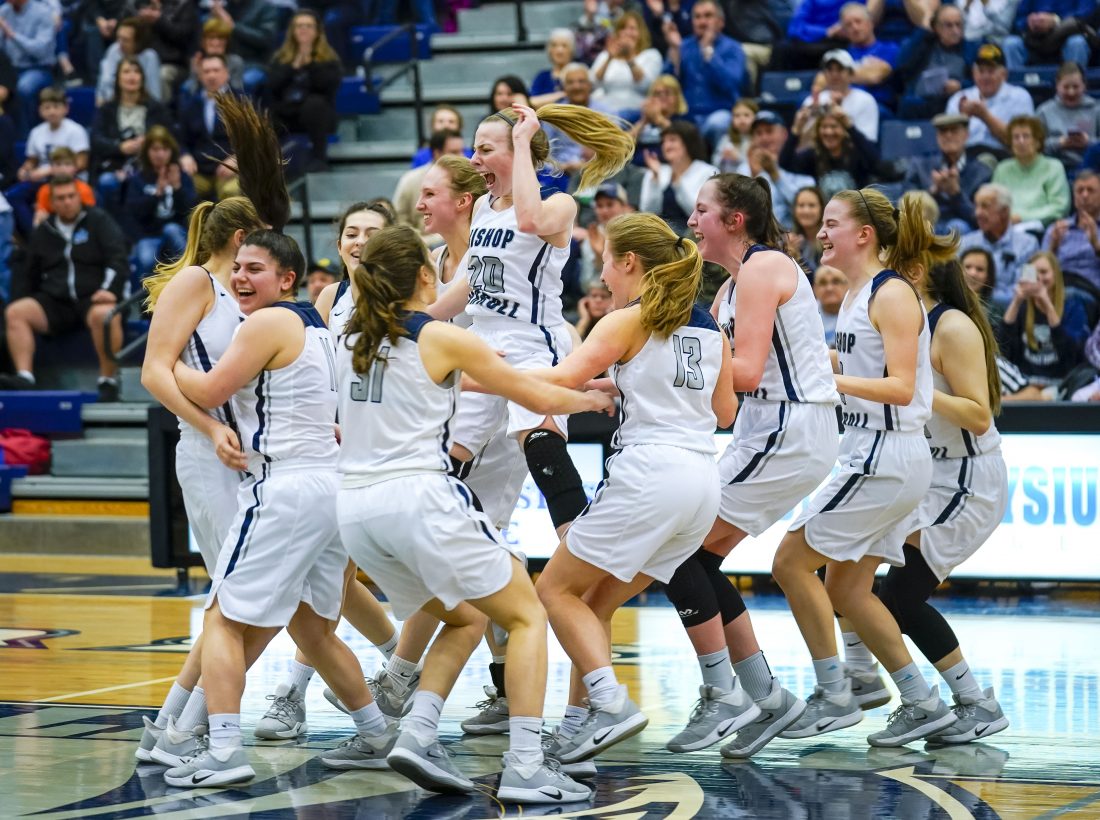 Faith McMullen (20) leaps into a crowd of teammates as they celebrate their District 6 Class 1A Championship. Photo for the Mirror by Chuck Meyers

The Lady Huskies are champions of District 6 once again after a dominant 51-27 performance over Saint Joseph’s Academy at Mount Aloysius College Wednesday night in the Class 1A championship game.

It’s the third championship in four years for Bishop Carroll, and the first for first-year coach John Bianconi.

“Out of this world,” Bianconi said on winning his first district title. “New coach hired in August, putting in plays in the middle of the season, a whole new style, pressing, running, one returning starter, three returning lettermen. It was a process. They trusted the plan, and the results speak for themselves.”

“The intensity of the press helps us to create that havoc so that they don’t get to set up their defense or they don’t get to take shots,” BC senior forward Mara Yahner said. “Whenever they were taking shots, they were quick and forced, and that’s exactly what we wanted to do.”

That press that has come on late in the season controlled Saint Joseph’s from the get-go.

Bishop Carroll went into halftime up, 28-8.

“What we play against night in, night out in the Laurel Highlands prepares us for this moment, Bianconi said. “When you’re battling all these Laurel Highlands (Athletic Conference) teams, and what they’re accomplishing, with as young as we are, we’re just going to get better and better.

“It’s just unbelievable, our effort, our hustle, and learning how to actually execute the way we want to play defense,” he said.

Freshman Madison Ostinowsky paced the Lady Huskies with 15 points, all in the first half, and 12 came during Carroll’s first-quarter run.

“We knew that the way to win the game was the press and to just play aggressive, tough defense,” Ostinowsky said. “We saw some openings in their defense, our defense translated into our offense and we got some good looks.”

She said that it feels great to be able — as a young leader — help carry on the tradition of success in the District 6 playoffs.

Former Carroll coach Bob Gongloff always produced strong defensive teams over his many years on the bench, which Bianconi said helped him and his staff while implementing the new system this season.

“It was nice. I really didn’t have to work on it that much,” Bianconi said, “but it was the press, adding the press element, it took a long year to learn that, but now we’re finally getting the turnovers. We had a bunch tonight.

“Everybody bought in,” Bianconi added. “We play eight, nine, 10 girls night in and night out in the Laurel Highlands, the toughest conference around, and that led to our success.”

Yahner had 12 points for the Lady Huskies to go with 11 from sophomore Savannah Smorto. The duo combined for 10 field goals, all from the paint.

The battle inside for Smorto contrasted the sophomore’s performance in the semifinals against Purchase Line, where she had five 3-pointers.

The next step in the process for Carroll is the PIAA tournament, where it will face the loser of Thursday’s District 3 third-place consolation game between York Christian and Lebanon Catholic in the first round.

“We know what we can do,” Yahner said. “I’m pretty confident that we can go pretty far seeing how we’re playing against these (Class) 1A teams. We’ve just got to keep working hard at it.”

Saint Joseph’s will also return to the PIAA tournament for the second-straight year.

It awaits the winner of Saturday’s District 5 Class 1A consolation game between defending PIAA Class 1A champion Berlin Brothersvalley and Shade.

“Hats off to Bishop Carroll, they play an excellent game,” Lady Wolves coach Katie Sosnoskie said. “They like the pressure, they like the fast pace and the tempo. We just couldn’t hit a shot early on to relieve our defensive pressure. They just didn’t seem to fall tonight, unfortunately.

“Our senior class, their freshman year they had five wins, and now they’re going to back-to-back state playoffs. The silver lining is we get to see another day. It’s not over, and we’re excited about the playoffs ahead.”