Smith has big second half for Valley 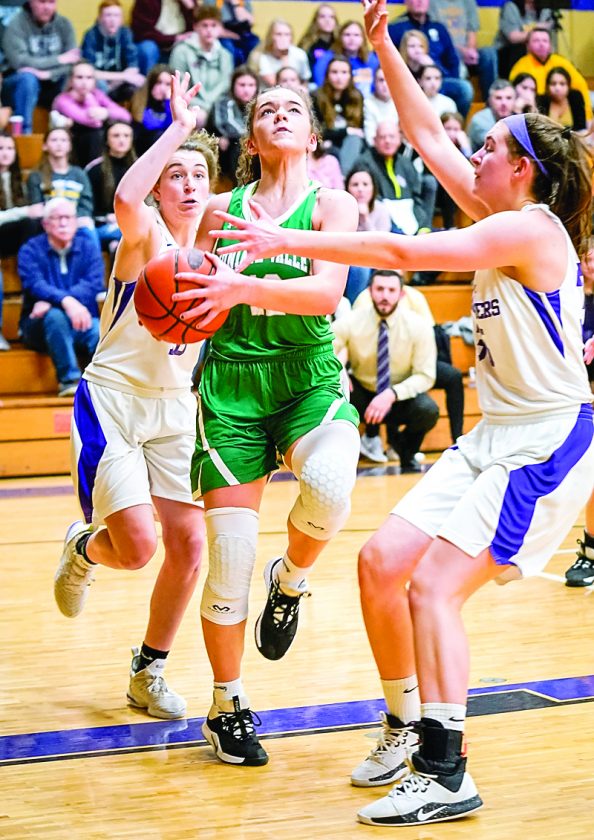 Hayden Taylor looks to get a shot up in traffic between BG defenders Sophia Warner and Teresa Haigh. Photo for the Mirror by Chuck Meyers

Juniata Valley is a senior-laden, battle-tested team that has made regular runs deep into the PIAA state girls basketball playoffs.

And none of the Lady Hornets’ players is more accustomed to high-pressure environments than senior forward Halee Smith, a Division I signee bound for Quinnipiac next year, who has participated in two PIAA championship games.

Smith scored 25 of her game-high 32 points in the second half as Valley (8-2) staved off BG’s strong early third-quarter push to post a 65-50 non-league victory.

“I knew that we had to do what we could to make a statement in the second half,” the 5-foot-10 Smith said. “We needed to take over ourselves, and whoever needed to do it was going to do it.”

That was Smith, who, after being limited to seven points in the first half, broke through for a big 17-point third quarter in which she displayed her brilliant inside-outside skills, making a pair of 3-point field goals and scoring four other buckets from the paint.

“Sometimes you can hold her back for a little bit, but you’re never going to shut her down,” Juniata Vallley coach Rachelle Hopsicker said of Smith. “They (BG) were playing really solid defense against her in the first half, but she is in great shape, and she is going to outlast everybody. She has a winner’s mentality.”

BG (9-3) opened the second half with a bang, closing the gap to four points, 31-27 early in the third quarter on an inside bucket by junior forward Teresa Haigh that capped off a five-point Lady Maraduers’ spurt.

Then Smith took over in a big way, leading the Lady Hornets on a 19-9 run that staked Juniata Valley to a 50-38 lead after three quarters.

She hit a driving bucket to give Valley a 33-27 lead before Taylor, who chipped in 18 points in the game, added a driving layup of her own after two free throws by BG senior Jamison Consiglio to make it a 35-29 game.

Two free throws by junior guard Sophia Warner and a nifty reverse layup by sophomore guard Leah Homan, who led BG with 17 points, pulled the Lady Marauders to within 35-33 before Smith hit a pair of free throws and followed with a 3-pointer from the right corner to put Valley ahead, 40-33.

After a Consiglio layup, Smith hit a spinning shot from the lane to give Valley a 42-35 edge. Homan connected on a 3-pointer from the top of the circle to pull BG to within 42-38, but Valley closed the third quarter with an eight-point run to keep the Marauders at arm’s length.

Smith turned a putback into a 3-point play (field goal and free throw), scored another field goal off an inbounds pass from Taylor, and drained a 3-point shot to give Valley the 50-38 lead and put the Lady Hornets out of harm’s way.

“They’re a great team,” acting BG head coach Adam Kaack — subbing for his wife Kristi, who is on temporary leave after delivering the couple’s third son last week — said of the Lady Hornets. “They’re experienced winners, and even after we made a fantastic push in the third quarter, there was never an element of panic on their part.

“They’re a seasoned team that knows what to expect, and they were the better team today,” Kaack said.

BG, which got 12 points and a team-high six rebounds from Haigh, closed to within 50-42 early in the fourth quarter before Valley used a 10-3 run to pull away for good and take a 60-45 lead.

“We prepared very well for the game, and we came out strong in the second half,” Taylor said. “We always pride ourselves on defense, and our defense helps our offense get moving.”

Hopsicker was thrilled with her team’s overall effort.

“This is a tough place to play,” Hopsicker said. “I thought the kids on both teams played hard. I’m proud of my kids. They played their hearts out.”

Game notes: BG, which held a narrow 23-20 edge in rebounds, converted 16 of 43 floor shots, while Valley made 22 of 40 … Juniata Valley hosts Moshannon Valley in an Inter-County Conference game Tuesday night, while BG next plays at Penn Cambria in a Laurel Highlands Athletic Conference game Wednesday night.