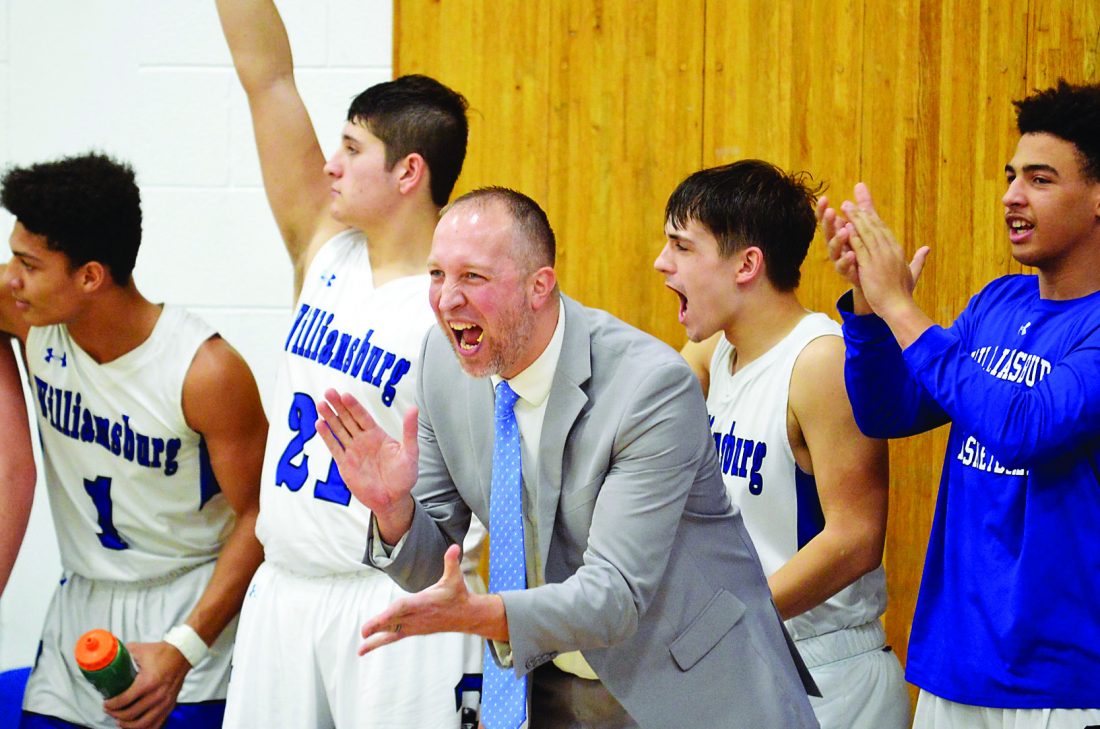 Mirror photo by Patrick Waksmunski Williamsburg head coach Brock Anders and his bench react to a basket during their game with visiting Bellwood-Antis.

WILLIAMSBURG — Many times, whether a team experiences previous success or failure, they are ready to turn the page and not talk about the season before by the time the current campaign rolls around.

That’s not the case for the Williamsburg boys basketball team.

The Blue Pirates went 3-19 last season, a number each player and coach is fully aware of, but they have used that disappointing season to fuel an 8-3 start to this year with a 6-1 record in the Inter-County Conference.

“Coming from a 3-19 record last year, it’s been a really great ride,” Williamsburg senior Jared McCall said. “We’re having a lot of fun winning and playing our hearts out every night.”

Williamsburg is coming off perhaps its best win of the year, 56-37, over Bellwood-Antis. The victory pulled the Blue Pirates into a tie for first place in the ICC halfway through the season.

“We’ve set some lofty goals for ourselves,” Williamsburg coach Brock Anders said. “We’ve surpassed some of them, and now we’re pushing toward some bigger goals. Anything beyond what we have now is obviously a plus compared to where we were last year.”

Coming into last week, Williamsburg had moved into the top spot in the District 6 Class 1A playoff rankings thanks to a tenacious style of play.

“My assistant coach (Tyler) Elvey did some digging around, and he thought it was probably 12 or so years ago that Williamsburg was up toward the top of the Class A rankings,” Anders said. “Even though we are just halfway through the season, we’ll take that as an accomplishment. It’s a tribute to our guys that come to work every night. I expect and request a lot out of them, probably more than most, and every night they seem to respond.”

Anders has been using line shifts, seen more often in ice hockey than basketball, to keep Williamsburg fresh and allow its defense to press throughout the game.

“Having a returning nucleus of guys has really helped us,” Anders said. “I think we put in a lot of work in the offseason in regard to our teamwork and chemistry. We’ve added some depth, so we’re able to run nine guys in and out of the basketball game. That gives us an advantage when we’re playing at the tempo we like to play at, and we’ve been able to be pretty successful so far.”

Jared McCall is one of the players in the second wave.

“It helps a lot, because we’re all coming in fresh,” McCall said. “Then, when we come out and the first team comes back, they’re coming in fresh. It works out really well.”

The fact that depth is a strength at Williamsburg, one of the smallest schools in the state, is an oddity on the surface. However, considering the rich history of basketball in the town, including a pair of boys state titles, playing for the team is something most kids in the town strive to accomplish.

“I think it’s really important to the community,” Williamsburg senior Dylan James said. “This is a basketball town. We have a lot of banners hanging in our gym, and it’s been awhile since we’ve had some success. Coming off 3-19 last year, it’s really important for us to be able to have that success.”

Anders said he makes it a point to remind his players of the school’s legacy.

“Obviously the tradition was here long before me,” Anders said. “I respect and love this community for their love of this basketball team. Even last year, when it was difficult, people were still coming out and supporting us. Now that we’re able to put a product on the floor that’s bringing some winning, obviously our alumni are proud. They stay in contact, and former coaches and players are always in the gym talking to our guys. They understand the importance of the banners that hang on our walls and the time and commitment that was put into this program being successful.”

Last season playing waves of similarly-talented players may have been an issue, but with most of the minutes being evenly shared regardless of who is starting, it’s working well this year.

“A lot of these guys are now sacrificing and accepting their role,” Anders said. “With the amount of guys we filter in and out — we put four guys in and four out in waves of players — a lot of guys have accepted those roles. They go out and do what they are supposed to while they’re out there. We’ve got nine guys that any given night can put the ball in the basket, and that’s a luxury that I don’t know if a lot of teams have.”