Mtn. Lions a work in progress 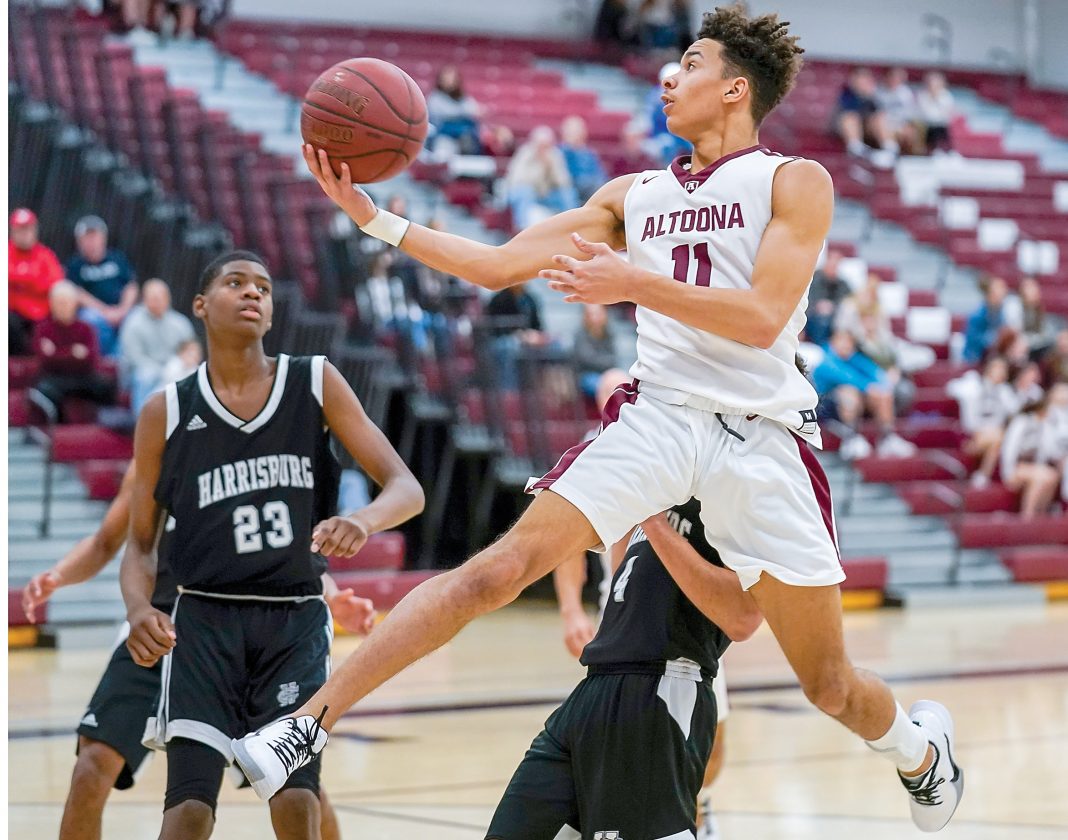 Photo for the Mirror by Chuck Meyers K.J. Futrell soars in for a layup attempt during Altoona’s loss to Harrisburg on Friday night at the AAHS Fieldhouse.

Jarrod Klausman has a job on his hands, and he knows it.

The Altoona Area High School boys basketball program has been in a funk in recent years, and first-year head coach Klausman has the task of improving it.

After four games, including a 78-49 Mid-Penn Conference thumping at the hands of Harrisburg on Friday night at the AAHS Fieldhouse, the Mountain Lions are 2-2.

“We’ve done a lot of good things already,” he said. “I’ve seen a lot of improvement in some areas. Last year they lost eight games by eight points or less and in our two wins against Montour and Carlisle we came back to win, so that’s encouraging.”

The Lions started strong Friday and led 12-10 late in the first quarter. However, a big second-quarter run by Harrisburg turned the tide in the Cougars’ favor.

“They’re a very talented team, so give them credit,” Klausman said. “That five or six-minute run in the second quarter was entirely too long. We called four timeouts, but still couldn’t stop it.”

Klausman challenged the Lions to play better in the second half, and they did, for awhile, cutting the deficit from 26 to 17 behind the scoring of Caleb Pierce, who bagged 13 of his team-high 19 points in the third quarter.

However, the Cougars finished strong with a 23-12 fourth-quarter blitz.

“When you play this level of basketball — 6A in the Mid-Penn — you’ve got to be sharp every possession,” Klausman offered. “If you have a little run where you don’t take care of the ball, you can go from a 3-point deficit to 13 in a hurry.”

Harrisburg coach Kirk Smallwood was happy with his team’s play.

“I thought we rebounded the ball well,” Smallwood said. “Anytime you come this far, you want to play well and win.”

The Cougars’ intense, pressure defense — particularly in the half court — was too much for the Lions.

“Pressure defense, that’s what we do,” Smallwood said, “and we play a lot of kids — that’s our style.

“McNeil is our football quarterback and he played much better tonight than he did in the other game,” said Smallwood, noting the Cougars lost their season opener to Cumberland Valley.

Altoona again played without P.J. Charles, arguably their best returning player. Charles was hurt in the season-opening win over Montour and hasn’t played since. A leg injury has Charles sidelined and Klausman said he’s not sure when the 6-foot-4 senior center will return.

The Lions play again today, hosting WPIAL power North Allegheny in a 6:30 p.m. varsity start. They have three Mid-Penn games next week — at Central Dauphin on Monday, home to Mifflin County on Wednesday and visiting CD East on Friday.