Letter of the law: Lady Lions find a way to pick up first win of season 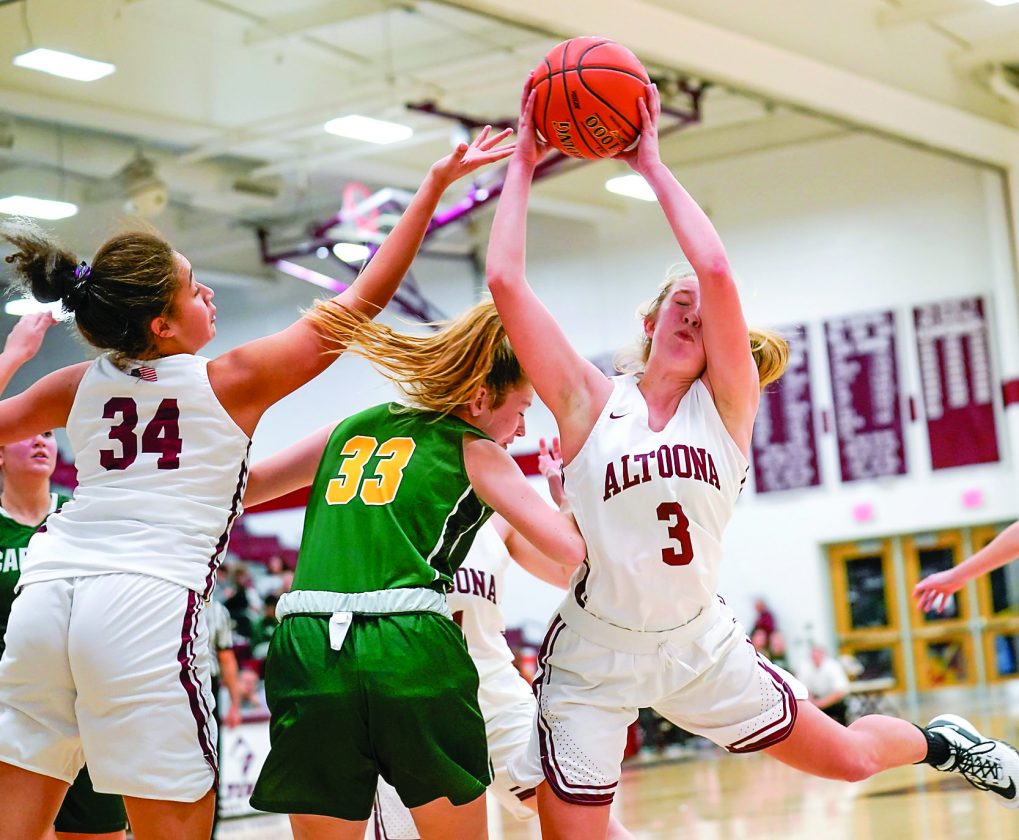 Brooklynn Rupert (3) and Navaeh Gibson (34) go after a loose ball. Photo for the Mirror by Chuck Meyers

Altoona didn’t have it’s “A” game Tuesday night. The cold-shooting Lady Lions struggled early, only scoring three points in the opening quarter, but clamped down on defense and pulled away in the second half to grind out a 40-21 win over Carlisle in a Mid-Penn Commonwealth Conference matchup at the AAHS Fieldhouse.

“You’re not going to play your best every night,” said first-year Altoona coach Chris Fleegle, who’s team dropped a hard-fought season-opening road game at Mt. Lebanon, 55-50, Monday night. “The good news is that at the end of the day, we still found a way to win.”

It was also the inaugural win for Fleegle as the new head coach of the Lady Lions program.

“It was definitely a defensive-minded game in the first half,” Fleegle said. “I never want it to be about me, but it’s something I’ll always remember.”

Altoona (1-1), playing back-to-back games to start the season, was a little rusty early. Carlisle (2-1) took advantage and jumped out to a 5-0 lead before Altoona junior guard Brooklynn Rupert drained a 3-pointer with 2:30 left in the first quarter to cut the lead to 5-3. Carlisle’s Rachel Bell converted a layup at the 1:32 mark to give the Thundering Herd a 7-3 lead after one quarter.

“Credit Carlisle, they came out and played hard,” Fleegle said. “They frustrated us on the defensive end. We played their game instead of making them play our game.”

The momentum started to shift early in the second quarter. Adalynn Cherry’s steal and layup sparked a 19-0 run for Altoona. The Lady Lions carried a 13-7 lead into halftime, and then scored the first nine points of the third quarter for a 22-7 edge with 1:10 left.

“We came out playing really hard,” said Carlisle coach Scott Mitchell, an Altoona graduate. “I think our effort was good the whole game, we just couldn’t put the ball in the hoop for awhile.”

Altoona’s Caranda Perea knocked down a jumper in the lane to stretch the lead to 24-9 heading into the fourth quarter.

“I think in the third quarter we went on a little bit of a run,” Fleegle said. “We weren’t shooting the ball well but our defense kept us in the game. At no point were they blowing us out because our defense allowed us to stay in the game until we could get some footing and get the offense moving in the right direction.”

Cherry recorded seven points in the fourth quarter to help Altoona close out the game. She led the Lady Lions with 12 points and also contributed three steals. Perea chipped in eight points, five rebounds and five blocks, while Rupert, a 5-foot-6 guard, pulled down a game-high nine rebounds.

“We started off slow but once got our legs under us, once we started going, we found our energy and I think that led us to the win,” Rupert said.

Fleegle was quick to credit Rupert for her hard work on the court.

“Brooklyn works extremely hard,” Fleegle said. “The fact that she’s rebounding the way she is isn’t a surprise. She just brings that effort to our team.”

GAME NOTES: Carlisle outrebounded Altoona, 36-34 … Julianna Askins led Carlisle with 10 points, including a trio of 3-pointers, and eight rebounds … Carlisle opened the season with wins over Dover and Northern to capture the Northern Tip-Off Tournament title.

Excitement builds with start of D6 2A Duals

The excitement of the 2019-2020 wrestling season gets ramped up a little bit more tonight when the first round of ...

Athlete of Week: Miller’s love of game paying off