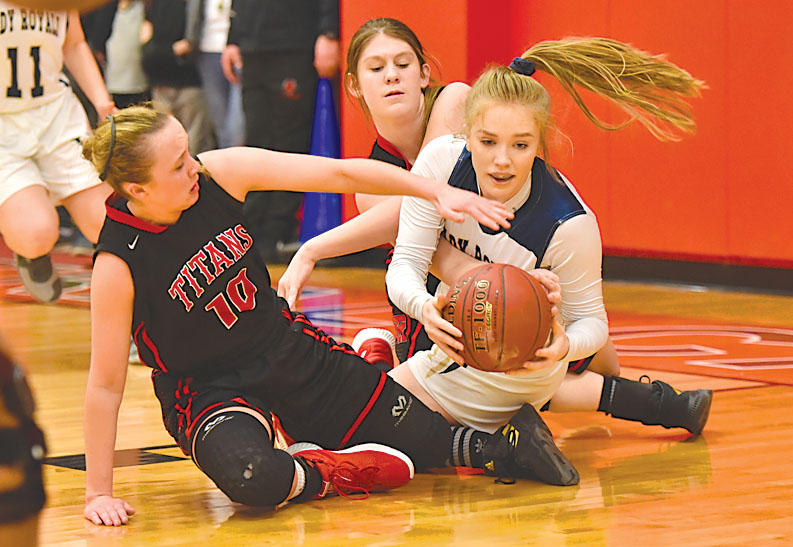 Photo for the Mirror by Roger Kerekes Tussey’s Lexi Weimert (10) and Kailee Leonard battle Vincentian’s Alana Winkler for the ball.

EBENSBURG — Tussey Mountain coach Todd Gates knew his team needed to knock down the majority of its shots and stay out of foul trouble if it was going to beat Vincentian Academy in the second round of the PIAA Class 1A playoffs.

Unfortunately, the Lady Titans weren’t able to do either.

In addition, Tussey was hammered on the boards as the Lady Royals won the rebounding battle and ultimately the game as the Lady Titans’ season came to an end with a 45-36 setback on Wednesday at Central Cambria High School.

TM ended its season at 18-9, while Vincentian improved to 15-13 and will play Shanksville-Stonycreek in the quarterfinals on Saturday.

Tussey Mountain got out to an 8-1 lead to start the game as Lexi Weimert, who led TM with 10 points, got a driving layup to go, followed by a Meghan Molosky 3-pointer, and a foul shot and layup from Kailee Leonard at 2:52.

Alana Winkler scored three straight points to put the Lady Royals within 8-5 at the close of the opening quarter.

Vincentian wasted no time seizing control and taking the lead as a trey from Sydney Calderaro just 15 seconds into the quarter knotted the contest, and then a putback by Hannah Katz gave the Lady Royals the lead for good at 10-8 with 7:05 to go.

Tussey Mountain was able to stay in the game no matter how many times Vincentian tried to blow the Lady Titans out due to the fact that they only turned the ball over six times, while forcing 15 from the Lady Royals.

“We took care of the ball, and we jumped into our press a couple of times and they turned it over,” Gates said. “But, we couldn’t capitalize at the other end. We had to take advantage of that but we didn’t do it.”

However, the shooting woes, foul trouble and problems keeping Vincentian off the glass proved to be too much for the Lady Titans to overcome.

Tussey Mountain began to get in more foul trouble as Sophie Brumbaugh was tagged with her third and was forced to sit. Losing their premier inside presence didn’t help the Lady Titans one bit as they were outrebounded by a 10-4 margin.

For the game, Vincentian dominated on the glass by a 41-15 edge with Katz, who finished with 13 points, nearly equally Tussey’s total herself with 14. Many of Vincentian caroms came on the offensive end of the floor which resulted in 16 points coming on putbacks.

“They killed us on the boards, because we were tentative because we were in foul trouble,” Gates said. “… We just didn’t shoot the ball very well. Their zone gave us problems because they were so big. They were hard to shoot over.”

In addition to having no answer to the Lady Royals inside play of Katz and Saige Smith, who had 10 points and nine rebounds, the Lady Titans also couldn’t contain the penetration of Winkler, who got to the basketball seemingly as will the entire evening.

“I thought Hannah (Katz) did a real good job inside. We made a point of emphasis of getting the ball inside to her,” Moncrief said. “… I thought Alana (Winkler) did a good job of handling their pressure, penetrating the gaps and finishing for herself and also dishing to her teammates as well.”

Tussey trailed at the half by a 20-17 score, but the the Lady Royals quickly added on in the third as Katz made 1-for-2 free throws after being fouled by Brumbaugh, which was her fourth, with 6:46 remaining. Smith and Katz got back-to-back putbacks to stretch the lead to 25-17.

However, Tussey Mountain didn’t go down easily as it raced all the way back to within four (29-25) when Maddie Garner, the lone Titans senior, buried a 3-pointer with 2:31 showing.

Winkler, who led all scorers with 15 points, would once again get the shots she wanted as she made a driving layup, and then, with 6.1 to go on the inbound, dribbled the length of the court to beat the buzzer to put her team up 33-25.

The Lady Titans continued to fight in the final quarter, and after Brumbaugh returned to the game at the 6:57 mark, she promptly hit a free throw line jumper to cut the deficit to just six (33-27).

After Winkler’s layup on the ensuing Vincentian possession, Molosky hit a shot at 3:58 to make it 35-29.

Unfortunately, for Tussey Mountain, the Lady Royals, who grabbed 13 rebounds to just three by TM in the fourth, flexed their muscles again as they got six straight points on a layup by Smith and two from inside by Katz to push the lead to the largest of the night at 41-29 with just 1:29 to go.

Weimert knocked down a 3-pointer in the middle of two hoops from Brumbaugh with the last coming with 13.3 left to play that set the final.

“They’re a solid team,” Gates said. “We just came up on the short end of it.”