PC girls turn it up a notch in earning title 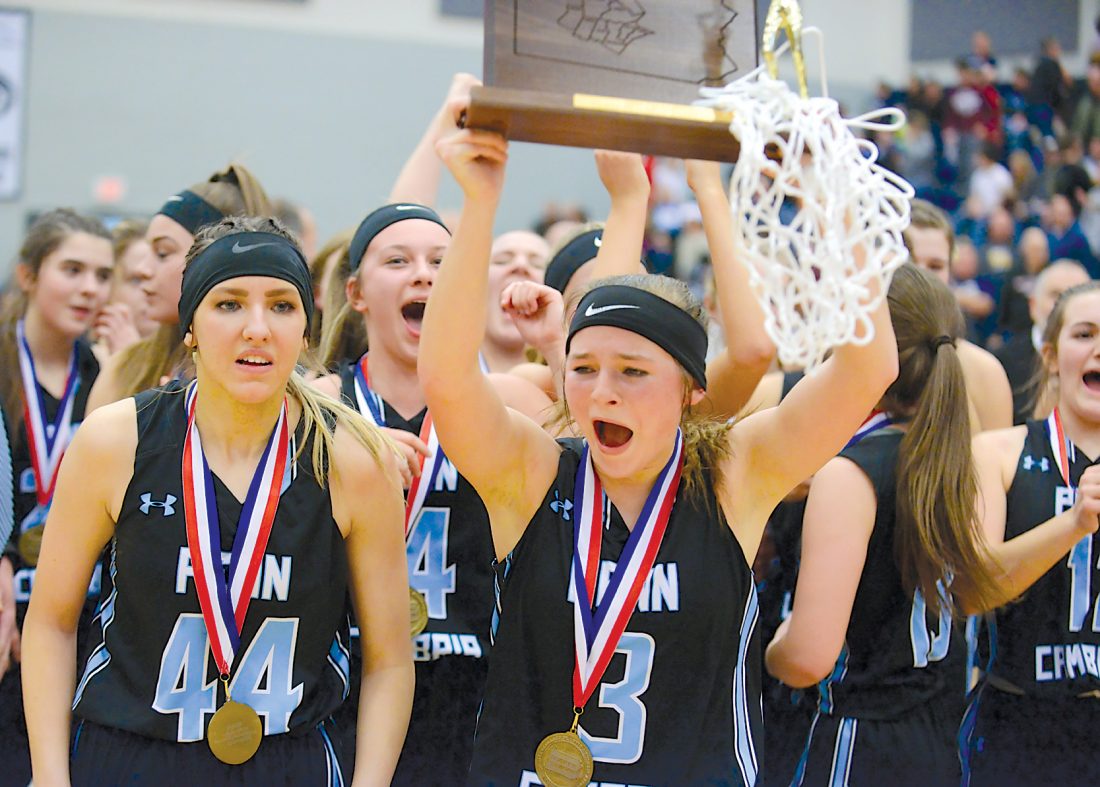 CRESSON — Penn Cambria girls basketball coach Keith Saleme doesn’t know where he will eventually rank his Friday night halftime speech, but one would think it will be near the top of his list someday.

Trailing Penns Valley by two points at the break after squandering a 10-point lead at one point in the second quarter, the Lady Panthers turned it up several notches in the third quarter, outscoring the No. 1-seeded Lady Rams, 23-9, en route to a 78-63 win in the District 6 Class 3A championship at Mount Aloysius.

It was Penn Cambria’s second-ever district championship and the first since 1993.

“We gave up about a 14-2 run there at the end of the first half, but this is a senior-oriented team and we didn’t panic,” Saleme, in his fourth year at the helm, said. “We kept with our press that has been so successful for us all season. I just told them to out-work the other team, and everything else would take care of itself”

Boy did it ever.

Applying a full-court press from the opening tip until very late in the fourth quarter, Penns Valley had trouble getting the ball up the floor at times, most notably in the third quarter, against the Lady Panthers’ pressure.

“I think we really got smarter after halftime,” Penn Cambria’s Makalyn Clapper said after scoring a game-high 23 points. “Our girls really worked hard to stop them on our press. We put more pressure on them and stopped the middle.”

Both teams went back and forth early in the third quarter, exchanging leads on several ocassions. Emmy Harvey, who finished with 18 points for the Lady Panthers (20-6), hit a 3-pointer near the five-minute mark to put Penn Cambria up, 48-46.

“They are just deeper than us,” Penns Valley coach Karen McCaffrey said. “They have a whole lot of kids who can run at that pace. We are not quite as deep as they are, and in that third quarter, we got down and we could not pull back.”

An Isabella Culver bucket cut the lead to nine for Penns Valley at 59-50 at the 1:02 mark. However, Clapper hit a foul shot, and Laken Guzic hit a baseline jumper with three seconds left, to put the Lady Panthers up, 62-50, after three.

“We are a very athletic team, and if you put us on a big court, it is hard to guard us,” Saleme replied when asked about hanging 78 on Penns Valley. “I told our girls at the beginning, they are going to come out and try to pressure you, but that will open up things inside.”

It did for Ryanna Hockenos, who finished with 12 points, all down low.

“The last month, if you look at her stats, Ryanna has really stepped it up for us,” Saleme said.

The Lady Panthers delivered from the foul line in the fourth, scoring just one field goal while going 14-of-16 from the charity stripe. The Lady Rams got no closer than nine points in the fourth quarter.

“We knew they were a physical team, but we do a lot of training for that,” said Saleme, whose club went to the line 31 times Friday night. “I thought the officials let us both play, and I was fine with that.”

Harvey and Clapper played at the top of their games in the first half, each scoring 11 points. The Lady Panthers led, 17-15, after one but blew a 33-23 lead at one point in the second quarter before going into the break down two.

“Those girls are relentless,” Saleme said of Harvey and Clapper. “They are like the Energizer Bunny. You wind them up, and they just keep coming at you until I pull them off. Even when we got down there, there was no panic in them.”

Afterward in an auxillary gym, surrounded by hundreds of fans, Saleme and his players savored the the team’s first district title in 26 years, which was won under the late coach Bill Klayko.

“We dedicated this season to Bill,” Saleme said. “Unfortunately, he passed away last summer, and if you look on the back of our girls’ shoes, they have a ‘BK’ for Bill. It is awesome for the community and for Bill.”

Game notes: Penn Cambria scored 21 points off turnovers and scored 30 points in the paint. … The Lady Rams scored 20 second-chance points. … Culver finished with 18 points to lead Penns Valley. … Penn Cambria will get the fifth-seeded team from the WPIAL (Beaver or Washington), while the Lady Rams will play the fourth seed out of the WPIAL (South Park or Avonworth).