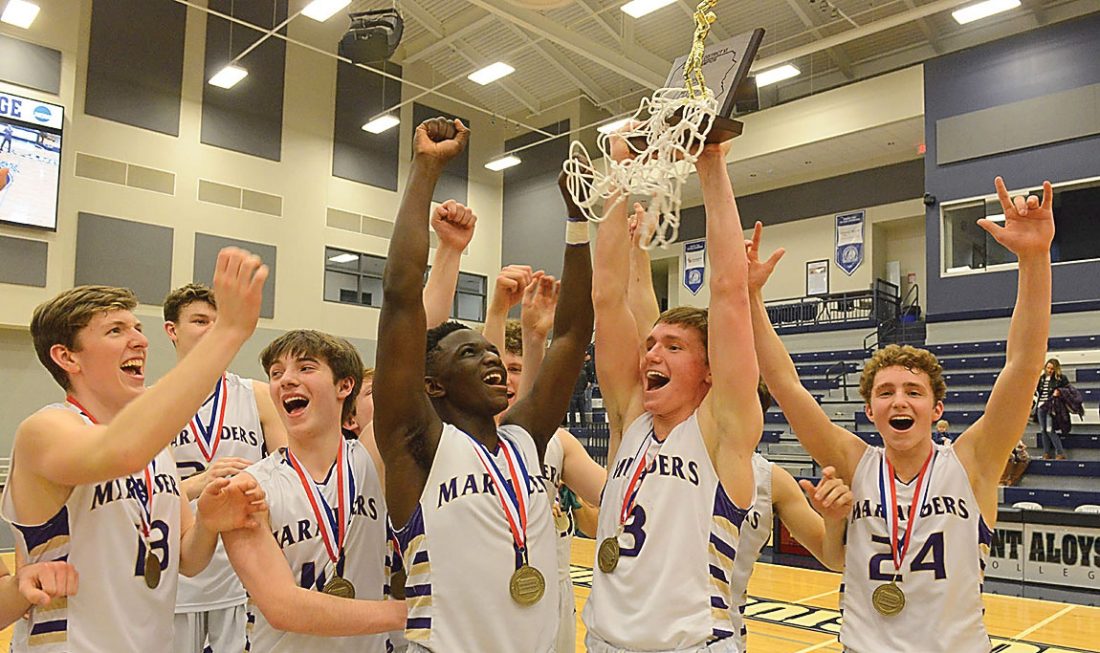 Standout senior guard Luke Ruggery scored 16 of his game-high 30 points in the first quarter, when BG used a 20-point run to build a 26-4 lead, en route to an 83-35 rout of outmanned West Branch in the district title game at the Mount Aloysius College Athletic Convocation and Wellness Center.

BG improved to 23-2 on the season and will take on the sixth-place finisher out of the WPIAL tournament in the opening round of the PIAA Class 2A playoffs next Saturday at a site and time to be determined.

“Obviously, I’m very happy about it,” Drenning said. “All anybody is trying to do is to establish a program and sustain success. To repeat as district champions is obviously something to be proud of.”

Ruggery, a Saint Francis University Division I commit who became Bishop Guilfoyle’s all-time leading scorer in program history in late January, said that the Marauders’ success this season was the result of year-round hard work.

“It feels great to have this feeling two years in a row,” Ruggery said of the title defense. “All the hard work we put in during the summer and for 365 days a year really pays off.”

“This is a family,” Witherspoon said. “We’ve put in the work all through the summer and fall, and today showed how hard that we’ve worked.”

Ahead 6-4 in the first quarter, BG embarked on its 20-point run to essentially put the game on ice early.

Witherspoon’s layup started the rally, and was followed by a 3-pointer from the top of the circle by Ruggery. Witherspoon chipped in a baseline jumper, Ruggery added another 3-pointer from the right side, junior Will Helton added a rebound bucket, and Ruggery hit a pair of free throws, to give the Marauders a 20-4 lead.

Successive field goals by Witherspoon, Ruggery and sophomore Andrew Yanoshak capped off the surge and left the Marauders coasting with the 26-4 advantage.

“They were going to play a zone, and we were going to run, spread it out, and shoot,” Drenning said. “It was a race of who would establish tempo first, and I think we did a real good job of doing that.”

Ruggery also said that the Marauders’ running game helped BG get out to its fast start.

“I think it was a credit to the tempo that we play,” Ruggery said. “We focus on getting up the floor, getting the open shot, and playing pressure defense. That really helped us in the first quarter.”

BG’s pressure defense forced 24 West Branch turnovers in the game, and the Marauders had a 54-18 lead at halftime.

BG expanded its 28-12 lead to 46-12 with an 18-point second-quarter run that was highlighted by three 3-pointers by junior guard Kyle Ruggery — Luke’s younger brother. Kyle Ruggery chipped in 13 points.

West Branch had made it to the championship game by beating Bishop McCort in the semifinals.

“They played a great game,” Clark said of the Marauders. “It’s common sense — you have to beat two Catholic teams to win a district title, and that’s very tough to do. Maybe I’m a little salty, but it is what it is.

“I’m proud of my guys,” Clark said. “We worked hard to get to this game. This is a great accomplishment for our program.”

Both teams are moving on to the state playoffs. As the district champion, the Marauders will play their first-round PIAA playoff game in or near Altoona.

“We’ll play the sixth seed out of District 7, and we don’t know who that is yet,” Drenning said. “We’ll play close to home. We have two starters with ankle injuries, and we can use a couple days of rest.”