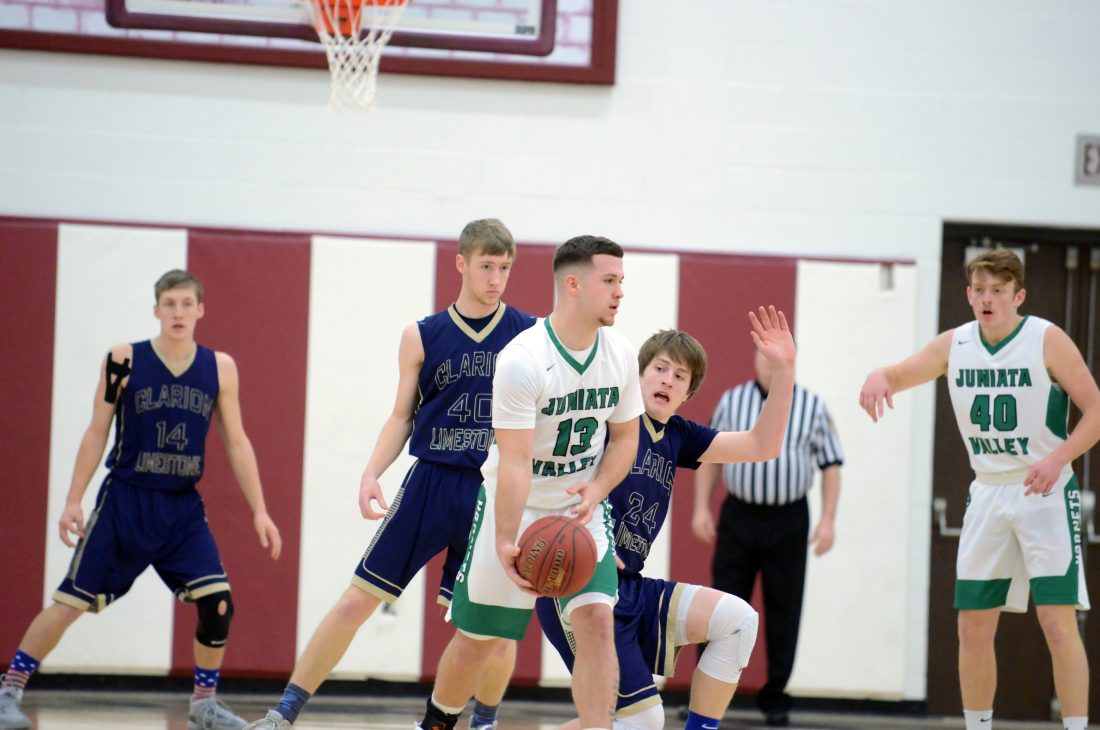 With less than four minutes left to play, Clarion-Limestone opened up a 17-point lead over Juniata Valley and looked well on its way to a lopsided win in the opening round of the boys 1A state playoffs.

The Hornets quickly reeled off 13 straight points, however, to make it a 55-51 game with 1:30 remaining, giving Valley fans hope that they could rally to win like the girls team did earlier in the evening.

Clarion, the third-place team out of District 9, advanced to the second round of the state playoffs with a 62-51 victory over JV Friday at the Altoona Fieldhouse.

“I thought we had a perfect game plan. We just did not play well, and when you don’t play well in these situations, you go home,” JV coach T.J. Anderson said. “We made ’em work for it down the stretch. We didn’t give up. My kids will never give up. We just fell short.”

Hayden Callen led the Lions to victory with a game-high 31 points, 11 rebounds and four blocked shots.

“There are certain nights when he’s feeling it, and he was certainly feeling it (Friday) on both offense and defense,” C-L coach Joe Ferguson said. “He’s a great 3-pointer shooter. He can go strong to the hole. He’s actually our third leading scorer, but it was night.”

“We got into a playoff game last year against a similar team so we decided to put our big man up at the point to deter his shot, and we pinched in hard when he tried to go to the basket,” Ferguson said. “We thought coming in if we control Cameron, we’d have a good shot.”

Clarion (22-5) held Collins to eight points through three quarters before he got loose for 14 in the fourth quarter to lead the Hornets’ late charge.

Collins started the comeback with a pass to Grant Musser for a layup, then turned a Quinn Zinobile steal into two more points with a driving layup.

He put two more points on the board with a steal that resulted in another layup.

Jaxson Rand’s bucket off a Zinobile steal cut the Lions’ lead to single digits, then after Clarion called timeout with 2:14 to go, Collins was fouled after making another steal. He made both free throws, trimming the deficit to seven.

Collins sent the crowd into a frenzy with a long 3 from the left wing that made it a 55-51 game.

“We turned it up and started going wild. Trying to make the steal, trying to get the rebound and scoring as quick as we could,” Collins said.

Callen ended JV’s rally after that, though, with a pair of foul shots followed by a bucket on the fast break, and Clarion made three more free throws in the final 38 seconds to secure the win.

“We got it to four then turned the ball over, and that did it for us,” Collins added. “It was a great four years. I love playing for Juniata Valley. I’m definitely going to miss it. I just wish we could have done more.”

Collins led Valley with 22 points. Zinobile had a double-double with 12 points and 12 rebounds, and Rand added nine points.

Deion Deas scored 13 points for Clarion, and Ian Callen, Hayden’s older brother, had a double-double of his own, matching Zinobile’s 12 points and 12 rebounds.

Leading 11-10 after one quarter, Hayden Callen sparked an 8-0 run with six straight points to give Clarion a nine-point lead.

The Lions opened up a double-digit lead early in the third quarter and held a 45-29 advantage by the end of the period. At that point, Hayden Callen had 26 points, just three shy of JV’s team total.

After winning its first District 6 championship in 23 years last weekend, the Hornets’ season ends at 18-6.

“We’ll grow from this as a program, as a coaching staff. I feel for our seniors. I felt they gave us everything this season,” Anderson said. “You can’t take anything from these kids. These kids are champions. They won the district, and they have something to hang their hats on.”