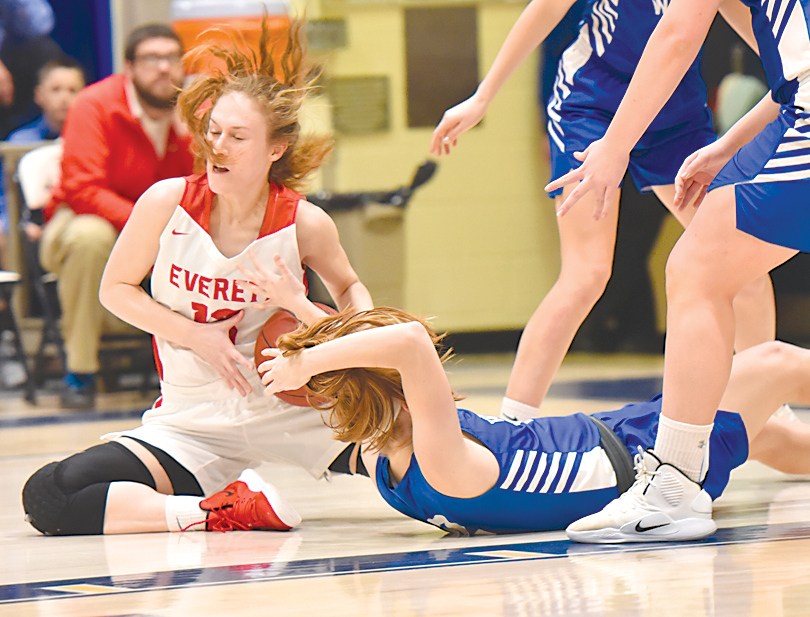 Photo for the Mirror by Roger Kerekes Everett’s Kristen Ewing secures the ball and draws a foul against Windber’s Madison Leonardis on Friday.

JOHNSTOWN — Even the fiercest competitors can find time to enjoy a championship.

Everett’s Kaitlyn Maxwell, who scored a combined 75 points in the Lady Warriors’ two playoff wins, allowed her usual serious look to melt away as she shrieked a tiny bit and quickly jumped in the air while smiling ear-to-ear when she was asked what it felt like to win a district title.

Everett pulled away from Windber in the second half behind a much more aggressive Maxwell, and the Lady Warriors captured the District 5 Class 2A championship, 63-42, Friday night at the University of Pittsburgh at Johnstown’s Sports Center.

Everett led by only eight at halftime, and that lead was cut to four several times in the third quarter before Lady Warriors coach Keith Moyer pushed Maxwell to be more assertive.

“I think their size intimidated us a little bit early,” Moyer said. “Once we started being aggressive, it led to fouls. They were bigger than us, but I think we were a little quicker. We put them in positions where they were reaching, and we were able to convert at the foul line.”

Both teams seemed to spend more time at the foul line than they did actually playing the game. Everett shot 36 free throws, and Windber got 23 attempts. Brooke Colledge fouled out for the Lady Warriors, and Madison Leonardis fouled out for Windber. Three other Lady Ramblers had four fouls, as did Everett’s Kristen Ewing.

“I think for both teams, it was actually pretty difficult to get into a rhythm with all the fouls,” Windber coach Cory Pavlosky said. “(Colledge) fouled out for them. We had two point guards in trouble. We had our center in trouble. Whenever you start losing bodies, your whole game plan changes.”

Makaela Cominsky, who scored her 1,000th career point during the game and led the Lady Ramblers with 14 points, made a pair of free throws with 3:21 to play in the third quarter to cut Everett’s lead to 32-28.

“Madison Hicks is the best undersized post player in the area,” Moyer said. “She’s been that way for two years now. She’s always undersized, but she’s been big for us. She never has a bad game.”

Hicks finished with 23 points and 17 rebounds.

Maxwell scored 14 of her game-high 29 points in the final 10 minutes to put the game away.

“In the first half, I was driving and picking up my dribble and passing it,” Maxwell said. “In the second half, I drove, tried to draw contact, and we got them in foul trouble.”

It was Everett’s first district title since 2015 in its first year back in Class 2A after competing in the District 6 playoffs as a Class 3A team.

“It’s nice to be back at home at UPJ,” Moyer said. “We haven’t always had success, but we’ve been here a lot, and we’re comfortable here. We got a big crowd, and the crowd was awesome. We’re going to need them next week when we start the state playoffs.”

Everett will play Serra Catholic, the fifth seed from the WPIAL, while Windber’s next game will be against PIAA Class 2A defending champion Bellwood-Antis.

“Bellwood is a good team with a lot of history,” Pavlosky said. “Coach Moyer has been gracious and offered us some film on them, and we know about Alli Campbell and (Sakeria) Haralson inside. We’ve watched them. They are big, strong and fast, but hopefully this game ignites our girls.”