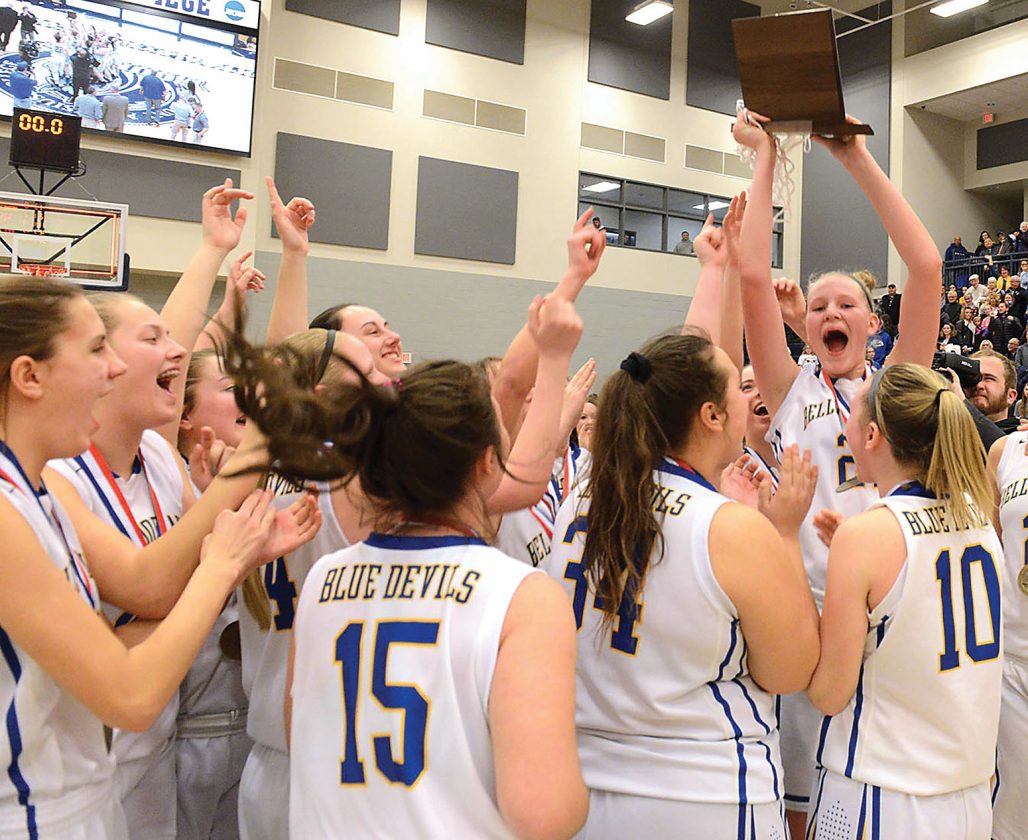 CRESSON — Round three went to Bellwood-Antis Thursday night in the District 6 Class 2A championship game, 52-49, over Juniata Valley at Mount Aloysius.

After the game, players, coaches and the more than 1,200 fans that attended the game at Mount Aloysius were already talking about a possible fourth round.

“Not saying it’s going to happen, but it certainly can happen where we play these guys again in a few weeks,” Bellwood-Antis coach Jim Swaney said. “I think we’re both two of the better teams in the state. To come out of this district and beat Bishop McCort, Penns Manor and Juniata Valley within a week, that’s drop the mic kind of stuff. I don’t know that we have anything else to talk about after that.”

With Bellwood-Antis on one side of the PIAA bracket and Juniata Valley on the other, that fourth game would have to take place at the Giant Center in Hershey with the state championship on the line.

“The last time we lost a district championship (in 2017), I shook hands with the coach at Bishop Carroll and told him we’d see him in the finals,” Juniata Valley coach Rachelle Hopsicker said. “I think we said the same thing today, we’ll see them in the finals.”

For Bellwood-Antis, that journey will begin with the loser of tonight’s District 5 championship game, either Everett or Windber. Juniata Valley will play the fourth-place finisher from the WPIAL, Laurel.

Thursday’s game certainly could have went either way. The teams each won on their own home court during the regular season, and the championship game went down to the final possession.

Alli Campbell, who scored 12 of her game-high 22 points in the fourth quarter, made one of two free throws with 8.8 seconds left to leave the door open for Juniata Valley, but Olivia Smith’s 3-pointer bounced off the rim just before the buzzer.

“Alli struggled a little bit in the first half,” Swaney said. “Late, you really saw the type of player she is. When they were trying to go full man inside of a minute, she was the one that wanted the ball.”

Juniata Valley led by six early in the fourth quarter when Avery Taylor made a pair of free throws, but the Lady Blue Devils used a 9-3 run to tie the game at 40 on Emilie Leidig’s 3-pointer with 4:18 to play. During that run, star Juniata Valley junior Halee Smith picked up her fourth foul.

Smith answered Leidig’s trey almost immediately with a layup to put the Lady Hornets back in front, but the game changed just seconds later.

After Bellwood-Antis missed a shot, Sakeria Haralson and Smith both went up for a rebound. The whistle blew, and Smith was called for her fifth foul with 3:49 to play.

Less than a minute later, a Juniata Valley defender slipped trying to get back out to cover Campbell, and the Notre Dame commit hit a wide open, go-ahead 3-pointer.

The Lady Hornets took the lead one more time on a Hayden Taylor 3-pointer with 2:23 left.

“When I got my fifth foul, I gathered up my teammates and told them to keep their heads up,” Smith said. “I knew they could still win the game without me. They kept their heads up and kept playing hard the whole way through.”

Campbell was fouled on Bellwood’s next possession and tied the game with a pair of free throws. She followed that with a steal and was fouled again going to the basket. Campbell made both free throws to give the Lady Blue Devils the lead for good.

“I just had to stay calm and confident and know my shots were going to start falling in the second half,” Campbell said.

The sharp-shooting junior drilled three first-half 3-pointers and came out of the locker room with B-A down two at the half and immediately made another one.

“If I’m up, they’re up,” Leidig said. “At halftime, they were up two and everyone was acting like it was over. I knew I had to go around the room and get them pumped up again. We came out stronger than ever.”

Leidig finished with 19 points, and after each one she either pumped her fists, stuck her tongue out or did a combination of both.

“Emilie is our emotional leader,” Swaney said. “When she goes and starts those gyrations with her arms and everything else, we get excited. That’s a good thing.”

Halee Smith finished with 21 points, including six straight to end the third quarter that gave Juniata Valley a 35-31 lead. Hopsicker was left to wonder what could have been if Smith didn’t foul out of the game.

“She’s the team leader, so it does knock your sails out a little bit,” Hopsicker said. “I was pretty proud of how the girls reacted. We really didn’t lose too much when she fouled out.”

As Smith and Hayden Taylor, who finished with 15 points, watched the Lady Blue Devils get gold medals draped around their necks, they began to think about getting another chance.

“I want to meet them again,” Smith said. “It was a good game both ways. The stronger the team, the better the game, and I’m excited for what’s to come.”