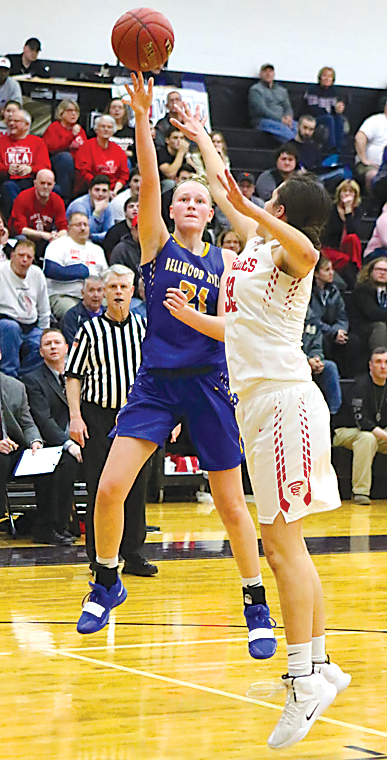 LEWISTOWN — Bellwood-Antis isn’t often threatened late in the fourth quarter, but when it is, the Lady Blue Devils always have their trump card to play.

Mount Carmel gave the defending PIAA Class 2A champions everything they could handle and took a one-point lead on Brooke Bernini’s 3-pointer with 24 seconds left.

But while many teams might be crushed going from two points ahead to one down with less than 30 seconds to play in an elimination game, Bellwood-Antis wasn’t.

Alli Campbell calmly brought the ball up the court, drove to the basket to force a foul, made both free throws and then pulled down a rebound on a missed layup defensively to all but seal a 47-45 win Tuesday at Mifflin County High School in a second round PIAA game.

“In the fourth quarter, that’s the time we want Alli to take over,” Bellwood-Antis coach Jim Swaney said. “We talk all the time about how one of the great benefits we have is that we have the best player in the state. We’re going to use her a lot.”

The Lady Tornadoes had taken the lead twice before in the fourth quarter, but both times Campbell answered with a runner in the lane. Then with the score tied at 42, she missed a layup, but it went right into Sakeria Haralson’s hands, who put it back up for the score.

“A lot of work went into preparing for games like these,” Campbell said. “I’m confident with the ball in my hands at the end of the game, and I want the ball. When I lose, I want it on my shoulders, and I’m just so pumped about how everyone helped pull out this win.”

With Mount Carmel trailing by one and seven seconds left, Haralson was called for a foul, and the Lady Tornadoes got to run a play from out of bounds under their own basket.

The lob came into Dani Rae Renno, who led Mount Carmel with 20 points and 12 rebounds. Renno’s layup attempt rolled off the rim into Campbell’s hands.

“That’s where we wanted to go,” Mount Carmel coach Lisa Varano said. “It just happens sometimes where it doesn’t fall when you want it to fall. Unfortunately, it came down to that one play. We were hoping it wouldn’t, but what are you going to do?”

Campbell was fouled with three seconds to play and made the first free throw before missing the second. She fouled the rebounder right away to stop play.

“I was planning on making the shot, but it rolled off the rim,” Campbell said. “I thought immediately about how we didn’t have that many team fouls. I knew if I fouled, that would stop the clock, and they would have to take it out of bounds and wouldn’t get a shot off.”

A full-court heave never had a chance, and Bellwood-Antis advanced to the quarterfinals where it will meet York Catholic on Friday.

“Bellwood is a phenomenal team,” Varano said. “They have so many different weapons. They have the obvious one in Campbell, but they also have a lot of shooters. You have to defend the other girls as well.”

Most of Renno’s success came when Haralson was forced to the bench with foul trouble. When she returned to start the second half, Bellwood-Antis threatened to pull away and took a 34-25 lead before Swaney pulled Haralson for the final minute of the third quarter.

Renno finished the quarter with four points that started a 12-2 run that put Mount Carmel ahead, 37-36, with less than six minutes to play.

“Alli had done a good job on (Renno), but she had two fouls,” Swaney said. “That’s probably me trying to be too smart at the end of the quarter. We switched Alli off of her, and didn’t have enough size on her at that point.”

Swaney was impressed with the District 4 champion Lady Tornadoes.

“Mount Carmel’s defense was tremendous,” Swaney said. “Those kids believed in the scheme they had, and (Lauren Ayres) is as good of a guard as we’ve played all year. Renno is great inside. When you don’t see people live, it can be a problem. (Ayres) was much quicker than I thought she was.”

Emilie Leidig joined Campbell in double figures with 11 points. The Lady Blue Devils trailed by two at the half before Leidig scored a quick eight points to start the third quarter.

“For the second game in a row, how about Emilie Leidig coming out of halftime?” Swaney said. “Two 3s, a steal and a layup, that kid came out crazed out of halftime.”