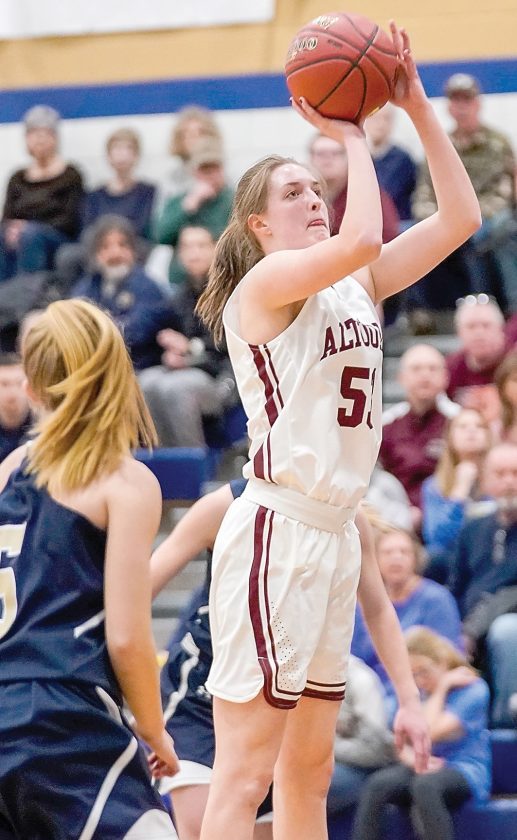 Bridgid Fox puts up a jumper for Altoona in the final game of her career. / Photo for the Mirror by Chuck Meyers

HOLLIDAYSBURG — The Altoona Lady Lions ran into a buzzsaw in their first-round PIAA Class 6A basketball playoff game Friday night.

Norwin of the WPIAL used a ball-hawking, pressure defense and pinpoint long-range shooting that produced a dozen 3-point field goals, to erase an early deficit and cruise to a 62-45 victory at the Hollidaysburg Area Senior High School gymnasium.

“We got beat by a really good team,” said Altoona coach Miriam Colledge, whose Lady Lions finished 16-8. “They only have two losses for a reason. They’re one of the most disciplined teams I’ve come across. Everybody knows their role, and the fact that they run (nine players) out there helps them.

“And when a team hits 12 3-pointers, it’s hard to keep up with that,” Colledge said.

Altoona broke out to an early 9-2 lead on an inside bucket by senior forward Bridgid Fox, a 3-pointer by senior guard Olivia Hudson, and two breakaway layups off steals by sophomore guard Adalynn Cherry.

But the fun stopped there for the Lady Lions.

Norwin used an 11-point run highlighted by 3-pointers from Wehner, Rosso and sophomore guard Mara Polcznyski to take a 13-12 lead after one quarter, then ruled both the second and third periods to win going away.

Norwin’s pressure defense forced several steals that turned into layups in the second quarter, when the Lady Knights staged a 10-point run to go up, 25-14.

An inside bucket by junior forward Cassie Cole started the uprising, and Wehner followed with a steal and layup to make it 19-14. Consecutive 3-pointers by Rosso, the first from the right corner and the second from the upper right wing after a steal by senior guard Emily Brozeski, put Norwin ahead by the 25-14 count.

“Altoona is a great team,” Norwin coach Brian Brozeski said. “They came out hot. But I’m proud of our girls. They kept on grinding from that point forward. They kept their composure and were able to battle back.”

Altoona shaved the deficit to 25-20, but consecutive 3-pointers by Gribble and senior guard Jessica Kolesar, along with a lay-in by Emily Brozeski, left Norwin ahead, 33-24 at halftime.

“We came out in the second quarter thinking that we needed to turn it on,” said Norwin senior guard/forward Abby Best, who tied Fox for game-high rebounding honors with 10. “We started making a lot of shots in the second quarter, the energy flowed from there, and we kept it going until the buzzer.”

Norwin continued its surge in the third period, which the Lady Knights started with a 12-point run to expand their lead to 45-24 and blow the game open.

“I think we played hard and we played the best that we could, but Norwin is a really good team,” said Hudson, who scored a game-high 17 points for Altoona. “They hit 12 3-pointers, and I don’t think there’s anything we could have done about that.”

Altoona won the District 6 Class 6A championship this year, and although the Lady Lions graduate two standout senior players in Fox and Hudson, a decent nucleus returns for next season.

“Give our girls credit — they got down, but they didn’t quit,” Colledge said. “They have nothing to be ashamed of, they can hold their heads high. We had a successful season, winning the District 6 title and having success throughout the year.

“Our two seniors, Olivia and Bridgid, have been our leaders all year — we couldn’t have got to where we got this year without them,” Colledge said of Hudson and Fox. “They’ll be sadly missed, (but) we have a good nucleus coming back. The kids just need to get out and start working early.”