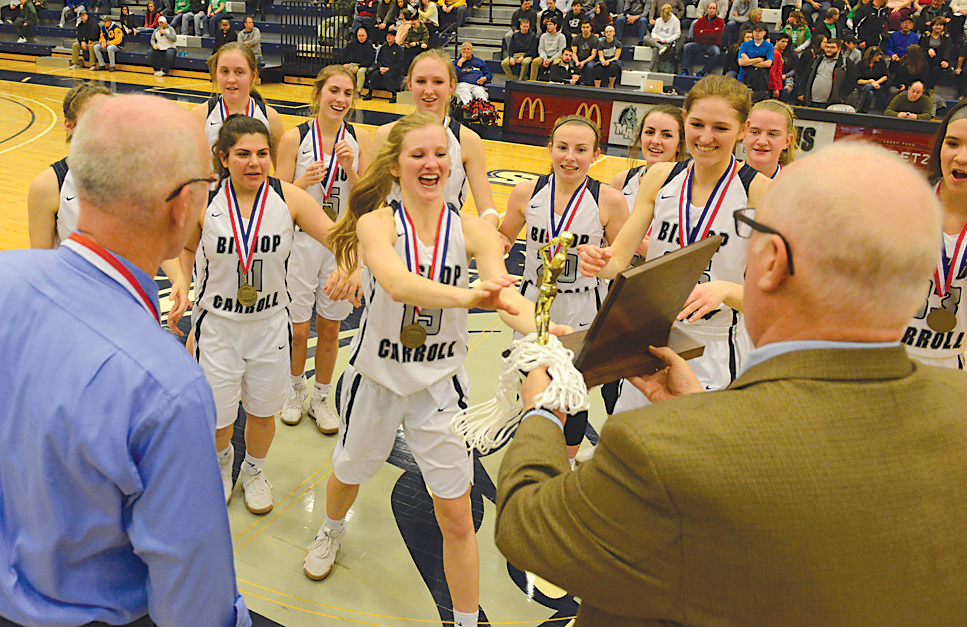 CRESSON — Bishop Carroll junior Lexi Popma dove for a loose ball in front of the scorer’s table, realized that the possession went to Purchase Line and turned smiling to look at her coach with a couple of minutes left in the game.

Bob Gongloff was grinning from ear to ear. After all, his starting five had been sitting on the bench for about 10 minutes already, and the game was well in hand.

The buzzer sounded, and Bishop Carroll’s celebration began as the Lady Huskies claimed the District 6 Class 1A girls championship in a 66-23 victory Wednesday night at Mount Aloysius College’s Convocation Center.

“I was proud of the way they were going after those loose balls.”

The Lady Huskies defense has been their defining feature all year long, and it was never more evident Wednesday. The Lady Dragons were held to just 6-of-34 shooting from the field for the whole game and just 15 first-half points, drawing high praise from Gongloff.

“Defense has been phenomenal this year. The girls stepped it up the last eight or nine games,” Gongloff said. “We’re on top of our game. We’re playing the best defense that we’ve played all year, and that’s a tribute to the girls’ work ethic.”

“They’re willing to put it on the line and do all the dirty work,” he said. “Everybody has each other’s back.”

Senior forward Anna Haigh, who was second on the team Wednesday with 10 rebounds, said the Huskies’ defensive showing was nothing new.

“It’s the same thing we do all the time,” Haigh said. “We want to be super intense, talk the whole time and just give it our all. We did that today, and we held a good team to a very low score.”

It’s been a tale of overcoming early-season adversity for BC. Gongloff was placed on leave in December following an internal investigation by the school. No wrong-doing was found, and Gongloff re-joined his team on the bench by mid-January.

Gongloff gave all the credit to his team, which has now claimed its second District 6 title in the last four years.

“The girls just want to play basketball. They wanted to play. When everything got squared up, here is your end result,” he said, pointing to his team gathering up for a team photo with its latest hardware.

“A bunch of kids that want to play basketball and have fun.”

The run to the district title has helped bring the Lady Huskies closer together, Haigh said.

“I love these girls and I love this team. It feels amazing to get this district title and move on to states,” Haigh said.

“There are peaks and valleys and you have to handle them, lean on each other and get through it.”

But above all else, the girls are thankful for everything Gongloff has taught them.

“He teaches us all those lessons and coaches us to be our best all the time” Haigh said. “There’s no way we could do this without him.”

Kate Yahner said the Huskies have had the goal all year to reach the state championship in Hershey. This win is just that next step up the ladder.

“We’ve had these goals since the beginning of the season. There was kind of a drop-back, but the girls we have are so close now through everything,” Yahner said. “On and off the court, we’re best friends, basically. I couldn’t be happier with the team we have now.”

Kate’s sister, Mara, said she knew the Huskies would make it back to this point.

Building depth has been vital for Carroll’s run. The Yahner girls each netted 11 points along with Sam Rosenberger. Mara also had a double-double, grabbing a team-high 13 rebounds. Savannah Smorto also came off the bench for the Lady Huskies, netting a team-high 12 points on four 3-pointers.

“Our depth, we’ve been building it up since the beginning of the year, and I think we have it now. Anybody can score on the team,” Gongloff said.

“They switched on everything, hands and bodies in the passing lane,” Goss said, “It was hard to even get that first pass off for us. Our girls had a hard time handling that.”

She said she told her team, which still qualifies for the state tournament, that the games only get tougher now.

“From here on out, games are going to be quicker,” Goss said. “Foot speed, you’ve got to move. In order to play at a higher level, compete and win games you have to increase your speed and intensity and play more aggressive.”

For Gongloff and the Huskies, it’s time to focus as Bishop Carroll begins the march toward Hershey’s Giant Center.