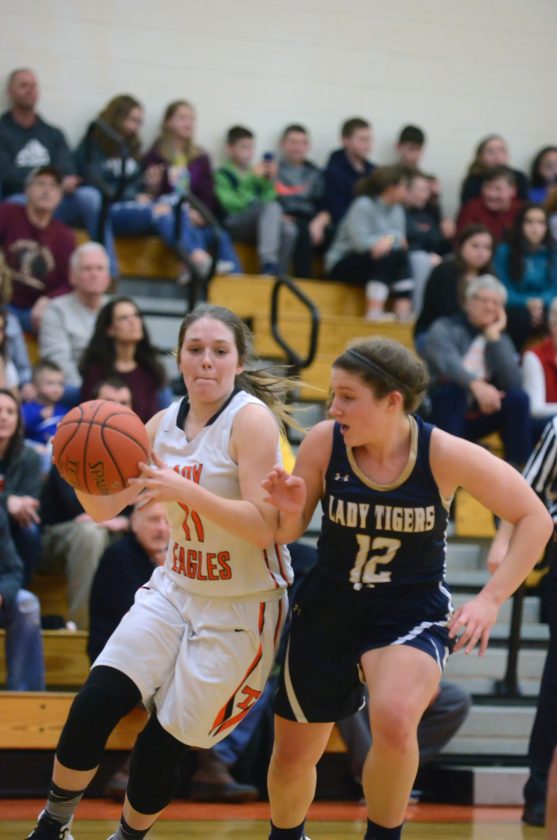 All three Tyrone seniors — career 1,000-point scorer Sydney Shaw, Brooke Welsh and Reilly Ronan — were in the starting lineup for Monday’s game, and all three acquitted themselves well.

At the same time, it was a pair of freshmen, forward Jaida Parker and guard Stephanie Ramsey, who showed that the Tyrone girls basketball program will be in good hands for years to come.

With Parker scoring a team-high 17 points, Ramsey adding 16 and Shaw 13, Tyrone rode its offensive balance to a 55-47 win over Hollidaysburg in the regular-season finale for both teams.

“I was really happy with our performance,” said Tyrone coach Luke Rhoades, whose team boosted its season record to 17-5. “We played hard, we played with excitement and enthusiasm. This was a real nice win for us going into the playoffs.”

Tyrone led for almost the entire game but had its hands full with a pesky Hollidaysburg team that never threw in the towel.

Tyrone managed to keep Hollidaysburg at arm’s length through four quarters. The Lady Eagles used a seven-point run on two inside buckets by Parker and a 3-point field goal by Ramsey to build a 34-24 lead late in the third quarter.

After Ronan made one of two free throws, Parker drove the baseline for a field goal to put Tyrone ahead, 37-30.

Hileman answered with a 3-pointer from the right corner to pull Hollidaysburg to within 37-33, but sophomore Shannon Shaw — Sydney’s younger sister — hit a big 3-pointer from the corner just before the buzzer to give Tyrone a 40-33 advantage heading into the fourth quarter.

“When Shannon hit that ‘3’, everybody got super excited,” Ramsey said. “I think that we all played as a team tonight, and we all had fun.”

A free throw by senior guard Sierra McClain pulled Hollidaysburg to within 40-34 in the fourth quarter, before Tyrone scored the next seven points to go ahead, 47-34.

Ramsey drove the baseline for a field goal to start the run, and Parker added a putback, before Sydney Shaw buried a 3-point shot from the right side.

“I thought we were pretty balanced on offense,” Rhoades said. “We hit the open player, and the girls finished their shots. That was important.”

Parker thought that Tyrone put forth a team effort.

“I think we played really well,” Parker said. “We all contributed to the win.”

A jumper by senior Hannah Snyder pulled Hollidaysburg to within 51-44 late in the fourth quarter, but Ramsey answered that with a pair of free throws with 22 seconds left to give Tyrone a 53-44 lead.

Hileman buried another 3-pointer in the final seconds, before Ramsey was fouled and made both shots to set the 55-47 final score.

“Tyrone came with plenty of energy on their senior night, and that was tough to match,” Hollidaysburg coach Deanna Jubeck said. “It was just one of those games where Tyrone made more baskets than we did.”

Both Tyrone and Hollidaysburg will host playoff games next Thursday night, Feb. 21.

In the District 6 Class 5A semifinals next Thursday, Hollidaysburg hosts the winner of next Monday’s first-round game between Bellefonte and DuBois.

The same night, second-seeded Tyrone hosts a District 6 Class 3A quarterfinal game against the winner of next Monday’s first-round matchup between United and Westmont Hilltop.

“We’re going to try to finish the year strong, and see what happens,” Rhoades said.