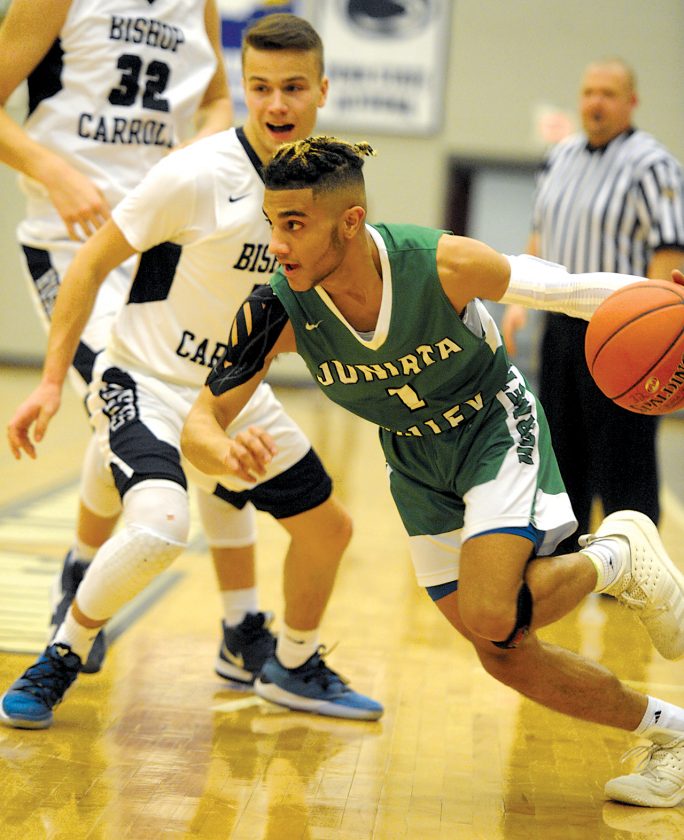 CRESSON — More than a half hour after its victory in the District 6 Class 1A championship game, the Juniata Valley boys basketball team was still on the court, celebrating its first title since 1996 with family and friends.

It was a stark contrast to the way the playoffs played out for the Green Hornets just a season ago.

Juniata Valley coach T.J. Anderson and his team remained in the locker room for nearly an hour after being upset by Saint Joseph’s Academy in the semifinals. A couple days later, the Green Hornets’ season ended with a loss in the consolation game.

That’s where the motivation and drive began for Wednesday’s 50-45 triumph over top-seeded Bishop Carroll Catholic at Mount Aloysius.

“We took the offseason, we worked and we talked about it,” Anderson said. “We changed some things with our culture, and they were dedicated to the things I was asking them to do. They had a hell of a run in football, so we had some adversity at the start of the season, but we worked for this moment right now since that loss last year.”

Cameron Collins scored a game-high 27 points and went 13-for-15 from the free-throw line, including 9-for-10 in the fourth quarter. He also had 10 rebounds, including one on a missed layup with Bishop Carroll down by three with 31.3 seconds left.

“We look back on last year, and we were the No. 1 seed and came out and got smacked,” Collins said. “We definitely weren’t expecting that, but we came back this year determined to do better.”

Juniata Valley struggled out of the gate, losing both of its games at the season-opening Roundball Classic at Hollidaysburg Area High School. Quinn Zinobile was still recovering from a football injury, and Collins missed most of the football season with an injury of his own before returning in the playoffs.

“Football season kind of held us back, and we started out slow,” Zinobile said. “I think we’re in the rhythm now, we’re doing really well.”

The Green Hornets have shown flashes of greatness this season, but they finally seemed to hit their stride in a comeback overtime victory against Saint Joseph’s in the semifinals.

Zinobile, who finished with 16 points, had back-to-back layups with less than four minutes remaining to break a 36-36 tie. Juniata Valley went ahead by as many as six, but the Huskies got within two when Carson Ertter made a layup with 55.1 seconds left. The Green Hornets went 6-of-8 from the line in the final minute to seal the game.

“It’s been a dream for all of us since we’ve been in ninth grade, me, Cameron and Jax (Rand) have been starting,” Zinobile said. “We’ve been working so hard, and I’m just so happy that we could do it for T.J.”

Early on, it appeared as though Bishop Carroll would be defending its district title from a year ago.

Tristan McDannell scored eight first-quarter points, and Ertter hit a 3-pointer that put the Huskies up 14-4. They took a 16-8 lead in the second quarter when McDannell found Scotty Semelsberger for a layup with 6:48 left in the half, but McDannell came up limping.

“I drove to the middle, dished to Scotty and must have come down on someone’s foot,” McDannell said. “I don’t know if I rolled it, but I did something to it. It’s killing me right now.”

McDannell limped to the back with a trainer and checked back in with 2:33 to play in the half, but he struggled to reach his top speed and wasn’t as big of a threat offensively or defensively.

Meanwhile, Collins was flying up and down the court and finished the half on a personal 10-0 run to give Juniata Valley a 20-18 advantage.

“Once we got to halftime, we had all our nerves out,” Collins said. “We just did our thing. This feels amazing to win it in our senior year. We have worked for this all season, and we finally did it.”

McDannell managed just one basket in the second half and had to sit out during the fourth quarter.

“It was horrible,” said McDannell, who added he hopes to be able to play in the state playoffs. “It was one of the worst feelings ever, watching my team without me. I have been playing with them all year. I couldn’t move. I was probably about 25 percent.”

Bishop Carroll will play the District 9 runner-up, either Elk County Catholic or North Clarion, in the first round of the state playoffs.

“The second quarter hurt us when Tristan went out,” Bishop Carroll coach Cosie Aliquo said. “I couldn’t give Carson (Ertter) a break with Tristan out. Carson was sick. He had the flu all day, so not having Tristan hurt even more.”

Juniata Valley will play the third-place team from District 9, either Johnsonburg or Clarion-Limestone.

“I feel so good for the seniors, the community,” Anderson said. “We haven’t won this thing since 1996, so to have these guys behind us and have these seniors go out the way they just did, it’s a beautiful thing. It truly is.”

Replace monuments with signs of peace