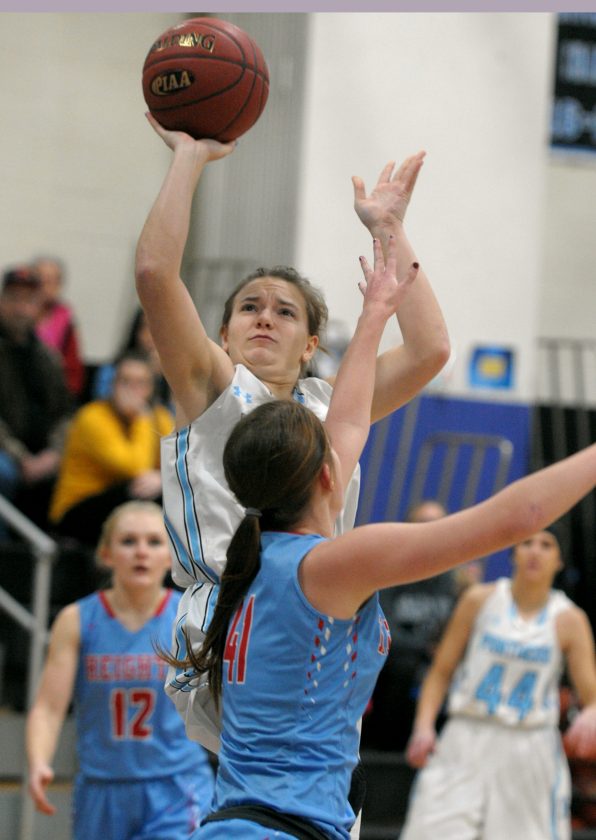 CRESSON — Even with the numerous playmakers the Cambria Heights girls basketball team possesses, a lethal press by Penn Cambria was too much to overcome.

Guided by senior guard Makalyn Clapper, who forefronted the press and led her team with 24 points, the Panthers used a strong first half to carry themselves to victory over the Highlanders Wednesday night, 68-54.

“I don’t think (Cambria Heights) really expected us to press so hard,” Clapper said. “We all worked hard together and played as a team. Plus, we got so many steals that everyone was able to get points, which helped there at the end.”

Right out of the gate, Penn Cambria applied pressure heavily and often.

With the athleticism that players like Clapper, Mia McCarthy, Lora Davis and others possess, a full-court press was sustained throughout the entirety of the game.

“We are one of the few teams that press all the time,” McCarthy said. “We’re a very athletic group, so we can do it the whole game. That really surprises teams, because I don’t think anyone is really used to that.”

After out-scoring the Highlanders, 20-14, in the first quarter, a 12-0 run added even more separation between the two teams.

Seven treys from five different players in the first half also played a factor.

“Our shots were actually falling for us tonight, which was great for us, because they hardly ever do,” Clapper said. “With that, (Cambria Heights) didn’t really know what to do, or whether to play man or zone against us. Getting our shots to fall really helped.”

Clapper scored on four different occasions from 3-point range, with junior point guard Hannah Saleme picking up a pair herself.

Coming out of the half with a double-digit deficit, the Highlanders quickly adapted to the pressure the Panthers applied.

Using his senior leaders, Penn Cambria coach Keith Saleme had to adjust right from the floor if he wanted his team to tighten its grip on the lead.

“The girls did a very good job adjusting to their press break,” Saleme said. “Our girls made the adjustment on the fly very well. In high school, some girls just don’t have the ability to do that. But with four seniors that have been around for a while and know our system and our rotations, they can make those changes.”

Cambria Heights used an 8-0 run and a 7-point third quarter by Chloe Weakland to cut the deficit to eight in the waning moments of the third.

But after settling down and refocusing, the Panthers closed out the game with a personal 8-0 run by Clapper.

“We had to take our time, because we were starting to get rushed and they were starting to climb back a little bit,” Clapper said of her team’s offensive breakout in the fourth. “I think we slowed down and got back to our game, and then we were able to add to our lead again.”

Picking it up an extra gear and having more girls contribute to the defense effort also helped alleviate some of the pressure.

“We have a lot of girls who aren’t really the tallest but can play big,” McCarthy said. “We work on defense a lot, and we’re really good at it. We also have a deep bench, which really helps us.”

Falling to 3-5 in conference play, Cambria Heights coach Amber Fees acknowledged that it was an uphill battle from the start.

“This was a tough game. Penn Cambria is a really great team,” Fees said. “They’re another one of the tough teams in the Laurel Highlands. They couldn’t miss in the first half and hit seven threes. We made some adjustments at halftime, and I was proud of my girls for coming out and bringing it within eight. We just couldn’t pull away.”

The Highlanders were led by Weakland, who picked up 21 points in the loss.

The major struggle for Cambria Heights was the lack of depth, with regular players such as Alice Hoover and senior Josie Bassett unavailable for the game.

That gave Fees only six true players she felt fit for varsity minutes.

“I’m very proud of this group,” Fees said. “They always play hard, and tonight we played only six kids, so their legs were starting to get to them. These girls aren’t used to playing so many minutes like that. But we’ll get there at some point and get right back to work tomorrow.”

$25B budget heads to Wolf