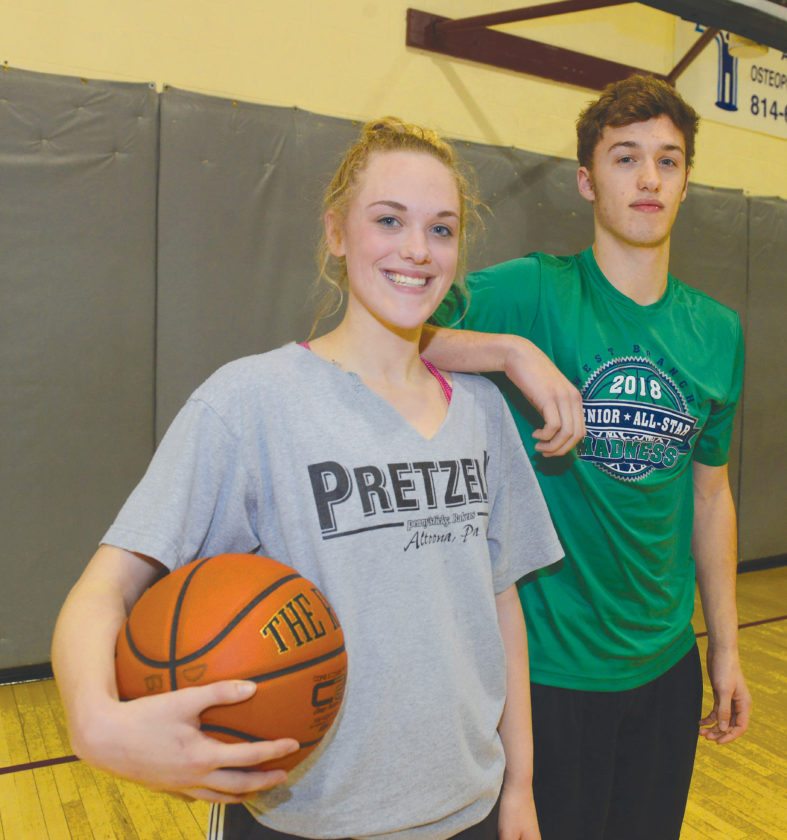 Mirror photo by Gary M. Baranec Twins Aliyah and A.J. Labriola of Bishop Guilfoyle will both be playing in today’s Mirror Classic games.

Bishop Guilfoyle Catholic senior A.J. Labriola will be walking on to the Saint Francis men’s basketball team next year.

Walking on to any Division I program is extremely hard, but it’s something A.J. has been preparing for his whole life.

After all, he’s been in a competition with his twin sister, Aliyah, since birth.

“I always wanted to be better than her,” A.J. Labriola said. “She pushed me at a young age.”

The back-to-back games on the same court will give the twins a chance to watch each other’s games, something that didn’t always happen during their careers at BG.

“I would get so mad when he’d have a big game the same night I played,” Aliyah Labriola said. “He was the same with me. I did get to go to the district title game, and I was so excited for him.

“Especially, because my team didn’t get that far. I was rooting him on and wanting him to get to experience that.”

A.J. got to experience what he called the best memory of his high school career when his Marauders rallied from a halftime deficit to defeat Purchase Line in the District 6 Class 2A championship game at Mount Aloysius.

“I’ll never forget winning districts,” A.J. Labriola said. “Even now, I can remember every play from it. It’s always going to stick with me.”

That game was something A.J. and his teammates had been striving for since they began their varsity careers.

“Sophomore year, we wanted to prove to everyone we could be really good and win a district title,” said fellow BG senior Nick Scaramozzino, who will also be playing in the boys game for Blair County today. “We knew we had to work really hard, and A.J. was a huge part of that.”

That drive came from a constant competition with his sister. Aliyah remembers A.J. always pushing both of them to be better at whatever they did.

“He did! I let him have it for sure,” Aliyah Labriola said. “He’s always been an inspiration to me with his work ethic in everything, especially basketball. I always wanted to be right up there with him.”

Aliyah finally got her chance this past season with the Lady Marauders. She averaged nine points and eight rebounds per game and helped Bishop Guilfoyle nearly upset Penns Manor in the district playoffs. The Lady Comets went on to play in the PIAA Class 2A semifinals.

“I watched her play as much as I could,” A.J. Labriola said. “We played a lot of the same nights, but I got to see her a few times. I thought she had a great year. She improved a lot and stepped into a leadership role and did really well with it.”

While A.J. was part of a team reaching its peak with a ton of senior experience, Aliyah was helping build a foundation for the Lady Marauders by serving as a mentor to her young squad.

“She really stepped up for our team after we lost everybody from last year,” said Bishop Guilfoyle senior Tessa Crider, another player in today’s Classic. “She did awesome in the post and was a key player for us on defense.”

As Aliyah developed her leadership skills, A.J. was pushing himself and his teammates to reach greater heights.

A.J. worked on his outside shooting to help compliment his inside game and teams could no longer key on just marksman Luke Ruggery from beyond the arc.

He finished the season averaging 17.1 points and five rebounds per game.

“If you can do both, you can be pretty hard to stop,” Scaramozzino said. “He’s just relentless, so that helps. He’s a determined guy. He doesn’t like to lose.”

That attitude will likely serve him well at the next level.

“I definitely think my relentless attitude will help me at Saint Francis,” A.J. Labriola said. “Coach (Chris) Drenning taught me how to work at a whole different level. He pushed me. I thought I was working hard, but I really wasn’t. He showed me how to put the work in.”

When A.J. continues his basketball career at Saint Francis, he’s already guaranteed to have one person in his corner. She’s been there since they were born.

“I’m so excited,” Aliyah Labriola said. “Hopefully I’m able to go watch a lot of his games, but I think he’s going to do great up there.”

What: Blair County vs. Central PA

Tickets: $5 for doubleheader (students 12 and under $3). Available beginning at noon today at Penn State Altoona