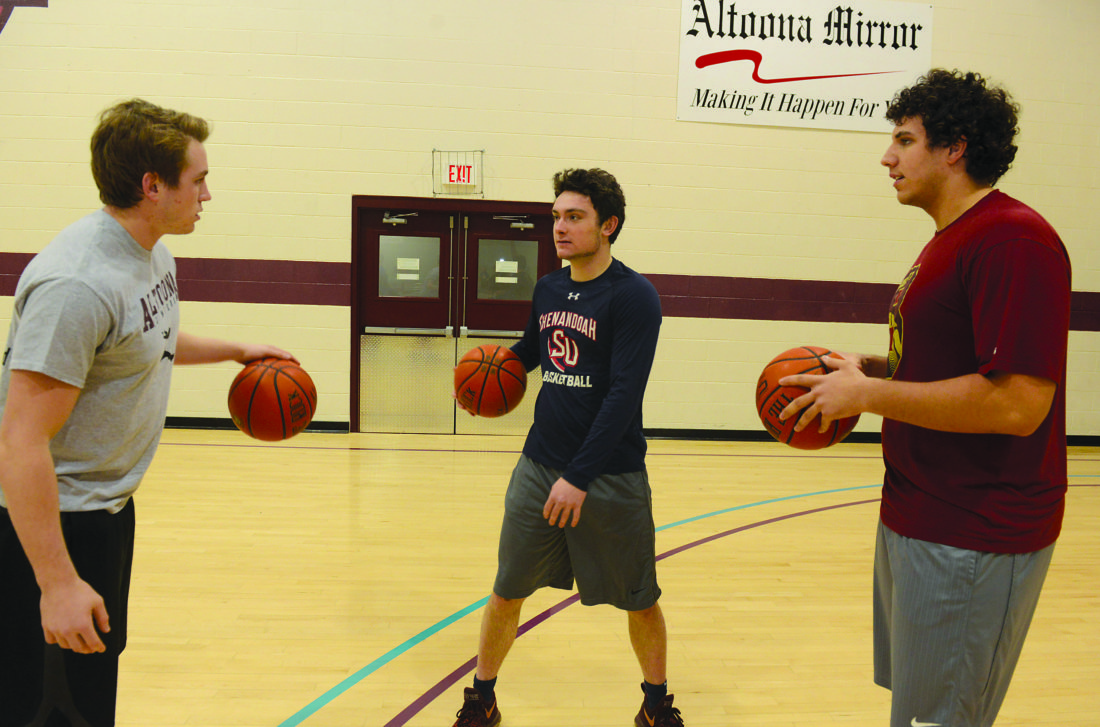 Central PA holds a 17-7 advantage between the boys and girls competition heading into the 13th year of the Altoona Mirror Basketball Classic.

The Central PA girls are 8-4 and the boys are 9-3, but for some Blair County All-Stars like Central’s Joey Smith, that’s just the way he likes it.

“It’s a big challenge,” Smith said. “A lot of times, Blair County is underestimated, but being the underdogs coming in makes it fun. It’s a good challenge.”

The series makes its way to Penn State Altoona’s Adler Arena on Saturday. The girls game will begin at 1 p.m. and the boys will start at 3 p.m.

Blair County and Central PA split the first four meetings in both boys and girls competition. Since 2010, it’s been mostly all Central PA red over Blair County blue.

Central PA’s boys team had won seven straight until BG’s Josh Trybus scored 20 points in last year’s game and the team went 16-of-36 from beyond the arc in a 109-104 Blair County win.

Hollidaysburg’s Ethan Haupt is hoping Blair can make it two in a row.

“Honestly, I feel like we have enough talent,” Haupt said. “With Trent (Walker), A.J. (Labriola), Max (Crownover) and all these guys. I’ve seen them all play, and I’m sure we’ll all play well together.”

With seven players averaging at least 16 points a game leading Blair County, this year’s game is likely to be another high scoring affair.

“It’s fun, because everyone is good,” Williamsburg senior Nick Michelone said. “When you’re in this game, there isn’t going to be anyone who isn’t good. It should be a great competition.”

The Central PA boys will certainly be formidable. Richland’s Tyler Zimmerman shouldn’t need too much time to get loose in Saturday’s game considering he’s fresh off leading his team to the PIAA Class 3A championship game. Zimmerman even made SportsCenter’s Top 10 for his 3-pointer to win the Rams’ PIAA semifinal game.

“We have a lot of talent,” Huntingdon senior Jonathan Price said. “I just feel myself getting better being around these guys, because everyone is so good.”

As evidenced by the sweat pouring off players’ brows from all four teams during Wednesday’s practice, the game means something to them.

“Playing in this game, which you have to get invited to, is really an honor,” Michelone said. “There’s only 12 guys from Blair County that get invited to this team. There’s a lot of pride in it, and it’s an awesome way to end the season.”

Though Blair County’s roster is made up from several less school districts than Central PA, some of the harshest rivalries reside in the area. Whether it be Altoona and Hollidaysburg or Tyrone and Bellwood-Antis, players are forced to change their mindset.

“My season is done, and high school is over with, so it’s awesome playing with these guys,” Haupt said. “I played with Trent in AAU, A.J. too. Playing with Max, Jayvion (Queen) and these kids from Tyrone and Williamsburg is awesome just coming in here and playing with them.”

“Just reading about all of us, I think we’re pretty solid,” said Bishop Carroll Catholic’s Alyssa Martinazzi as she flipped through her Central PA roster in the game program. “I think we’re all good athletes.”

In addition to playing for pride and a victory, the Mirror Classic also provides a chance for some players to take on opponents they didn’t get a chance to play during their careers.

“It would be fun to score on (Central Cambria’s) Matt Holsinger,” Smith said. “I know him a little bit, and I know he’s a really good big guy down low. Going up against him should be fun.”

What: Blair County vs. Central PA

Tickets: $5 for doubleheader (students 12 and under $3). Available at the Mirror from 9 a.m. to 5 p.m. through Friday and beginning at noon on Saturday at Penn State Altoona.