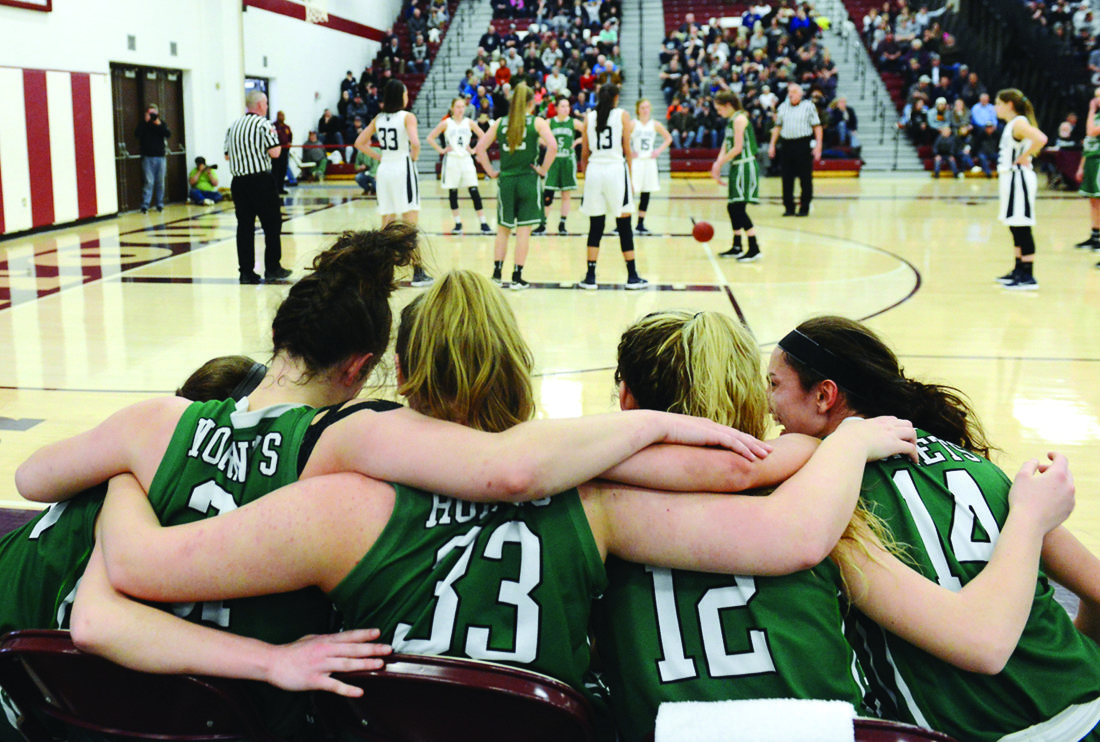 Juniata Valley’s starters huddle together in glee during the waning moments of Tuesday’s victory. / Mirror photo by Gary M. Baranec

There was a winter storm going on outside the Altoona Fieldhouse Tuesday night, while inside, at the PIAA Girls 1A semifinal matchup between Juniata Valley and Bishop Carroll, there was the perfect storm taking place for the Lady Hornets.

“I didn’t think we would win by this much, but we wanted to,” said Juniata Valley senior guard Sydney Reed, whose club led from start to finish in a 55-33 victory for another trip to Hershey in the state finals this Friday. “We just came out and played our hearts out and this was the result. It’s an awesome feeling.”

The perfect storm consisted of Juniata Valley (26-3) getting off to a hot start behind Reed, who helped her club take a 9-2 lead with two 3-pointers. Teammate Hayden Taylor added the other three.

“By her scoring those points early … I think that took a little bit out of their sails,” Juniata Valley coach Rachelle Hopsicker said. “Once we got ahead, I knew that if they had a little run, we would just have to keep matching them.”

A Reed bucket at the 2:03 mark of the first quarter put Valley up 13-4 and that is when Bishop Carroll’s leading scorer, Alyssa Martinazzi, took over. She scored seven points in the final 1:35 of the quarter to cut the lead to two, 13-11, after one.

However, what made it tough for Carroll (25-3) the rest of the game was that Martinazzi did not score again.

“They didn’t do anything different, they just did it better,” Martinazzi said of the Lady Hornets’ tenacious defense all night. “They had a great night and we had a bad game. It was tough to get a shot off. We could have executed better but we just struggled.”

Reed hit a bucket early in the second to put Valley up 15-12 but Adie Divido scored at the 6:34 mark to cut the lead to one, 15-14. To make things even tougher for Juniata Valley in the quarter, Halee Smith, picked up her third foul, and that was with fellow starter Taylor Leidy, already having two fouls in the first quarter.

“I think our girls knew they had to pick it up on defense. Halee is a big part of our defense. That is why we got in that 2-3 zone at that point,” Hopsicker said.

The foul trouble, and cutting it to one point, did not help Carroll. The Lady Hornets outscored Carroll 13-2 in those final 6:34 for a 28-16 halftime lead.

“It was quite obvious … we didn’t put the ball in the hole too good,” Gongloff said. “We missed too many shots. That happens in basketball, but if you are going to lose, let it be because the ball didn’t go in the hoop. They shot the ball well. They don’t miss. When they are open, they don’t miss.”

Valley spread the wealth around in the second quarter with Reed and Maddie Mattas scoring five points each. Mattas, a senior, scored all five of those points in a 46-second span for a 25-16 lead.

“She played like a senior who was going to get it done,” Hopsicker said. “When she shot the ball, you knew she was going to make it.”

Anna Haigh did her part in the third quarter to try and help Carroll cut into the Valley lead. She scored six points in less than three minutes, cutting the deficit to 10 points twice, 30-20 and 32-22. However, no one else was scoring as Valley held Carroll to eight third-quarter points.

“We knew there was a little bit of a mis-match with Haigh and their other big girl (Emily Kutskel) in there,” Hopsicker said. “We knew the high-low was coming and we played it. We really had them scouted pretty well.”

The offense was spread around again with Leidy and Reed each scoring five points. A 3-pointer from the wing by Reed, and two Taylor free throws in the final 1:14, gave Valley a 44-24 lead heading into the final frame.

“We worked hard on what we wanted to do (defensively), but we didn’t execute the plan,” Gongloff said. “We just didn’t get to our spots quick enough. We didn’t have our mojo tonight.”

The Lady Hornets spread out their offense in the fourth quarter, forcing Carroll to come out and play the ball, and then having to foul to even get the ball back.

“If we shoot 75 percent from the line, we will win every game. Every day we shoot foul shots,” Hopsicker said.

That’s what they did. Valley hit eight straight foul shots at one point in the fourth, and 14 in a row if you counted back to the third quarter, finishing 19 of 25 from the line. Leidy was 7-of-8 herself. Reed and Taylor were 4-for-4 each with Reed winding up the leading scorer at 18 points.

“I think it was a team effort, not just me. My teammates were really setting me up with great shots all night long,” Reed said.

Haigh finished with eight points followed by Martinazzi’s seven points. Hopsicker admitted that her team learned how to play better defensively against Martinazzi after the district title game.

“We went back and forth between our man and a zone and we just made sure everytime someone had a hand in her face,” she said.

Both teams emptied their benches in the final 3:14 of the game with Valley in front, 54-26.

“I’m proud of all the seniors,” Gongloff said. “I wish them the best in all their future endeavors. Their legacy is complete. We fell one game short, but they’ve done so much for this program. Two final fours, Laurel Highlands championships, Sweet 16s, just outstanding seasons.”

Valley will play on Friday at noon against the winner of Lebanon Catholic (District 3) and Jenkintown (District 1). Because of the weather, that game will not be played until Thursday. Friday’s title game is at noon at the Giant Center.