Marauders roll back into title contest 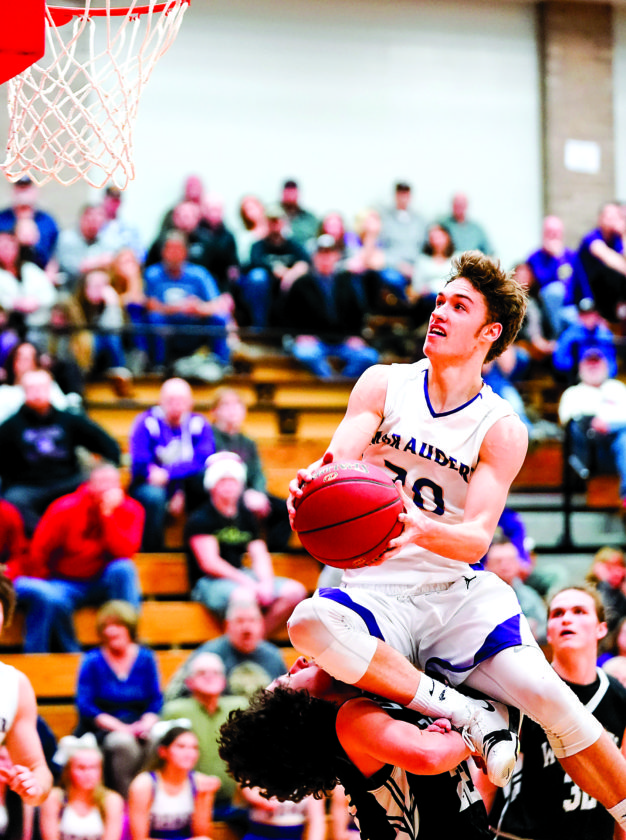 EBENSBURG — In the District 6 2A semifinal game between Bishop Guilfoyle Catholic and Homer-Center, the Wildcats student section taunted BG throughout with chants of “Let’s play football” and “59 and 1,” referring to the school’s November gridiron win that broke the Marauders long winning streak.

It didn’t phase Guilfoyle one bit.

“That’s outside the lines. When we step between the lines, we’re playing for us. We’re playing for the community,” Luke Ruggery said. “We’re happy we got the win for the whole Bishop Guilfoyle family.

The Marauders jumped out to an early double-digit lead and rolled past Homer-Center, 88-53, Tuesday at Central Cambria High School to earn a spot in the district championship game for the second straight year.

“I didn’t play football so personally I didn’t mind, but it was nice to get the win for the guys on the team that play football,” Nick Scaramozzino said.

Ruggery and Scaramozzino got BG rolling from the start. Scaramozzino put in a one-handed floater from the lane, and Ruggery knocked down a 3 for the first five points of the game.

A string of layups on the fast break by A.J. Labriola, Mark Conrad, Mike Scharf and Scaramozzino put the Marauders up 13-2 midway through the first quarter.

“We just go and try to get them tired. That’s the main goal,” Scaramozzino said. “I just try to do whatever I can to help my teammates and help the team win.”

The senior forward scored eight points, grabbed seven rebounds, and had a steal and a block in the first quarter. He finished with 14 points and 11 rebounds for a double-double.

After Ruggery his his second 3 late in the first quarter for a 22-9 lead, the junior guard got rolling in the second quarter with four more treys to finish the first half with 18 points. The final one put the Marauders up 20 with 15 seconds left in the quarter.

He finished with a game-high 28.

“My teammates were finding me, and we were swinging the ball, looking for the open shot. It was either me or someone else. We were playing well together as a team.”

In the third quarter, it was Mike Scharf’s turn. After knocking down a pair of 3s, he turned a steal into a layup late in the quarter, extending the BG lead to 31 points. He added two more treys in the fourth to finish with 18 points, 16 in the second half.

“Mike got going there in the second half,” Drenning said. “When we penetrate and rotate the ball, we can get that open look in the corner. We like having him there. He’s really good at that. He has almost 60 3s this year. He can really shoot the ball when his feet are set.”

Labriola hit a pair of 3s as well, giving the team 14 for the game.

“We tried to pressure them a little bit, but they’re very good at the guard position,” HC coach Bob Rado said. “Ruggery’s very good, but they have other guys that can hit. They spread you out. We tried to put somebody on him, but the other kids picked it up. That’s what makes them so good.”

“They’re very athletic. They’ve got a couple of kids who are as athletic as anybody we’ve played,” Drenning said. “They’re long. They create some challenges. They’ll be difficult on the glass and in transition. We’ll have to a good job identifying the transition and stay in front of them.