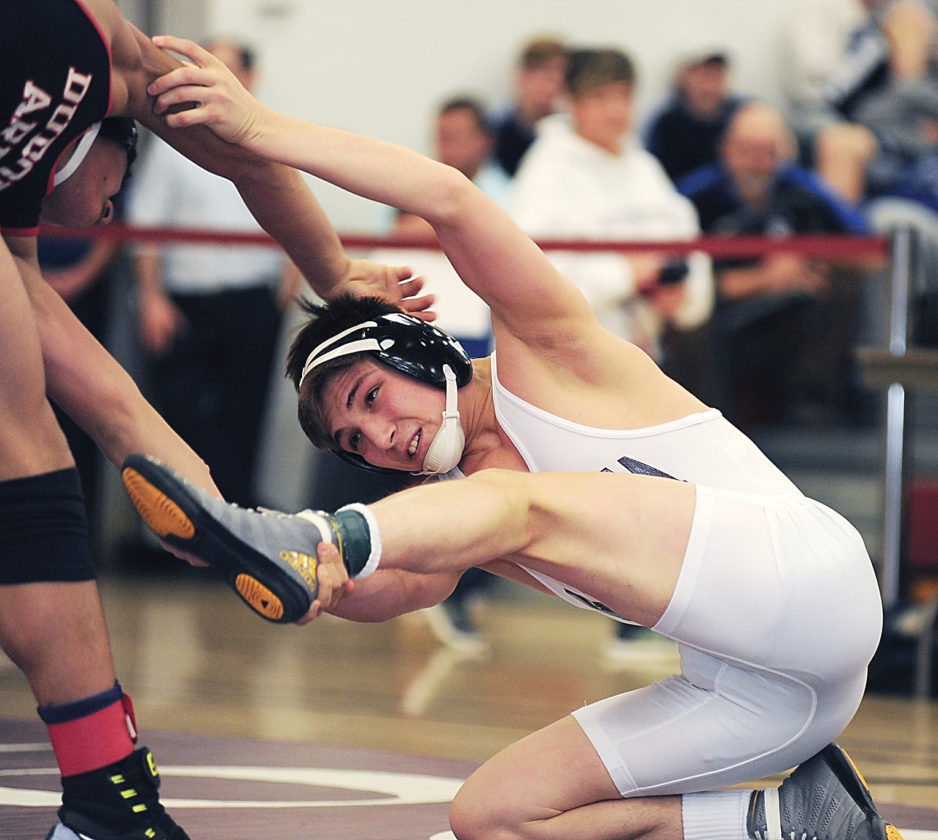 With a school-record third Northwest Regional Class 3A title under his belt, Altoona’s Cole Manley, can now look forward to winning that elusive state title he’s been shooting for his whole career.

Manley captured his third title with a 9-5 win over DuBois’ Kolby Ho in the 132-pound championship bout on Saturday night at the AAHS Fieldhouse. It was the first time this season an opponent avoided giving up bonus points to Manley, but the Mountain Lion was firmly in control the entire bout.

“It feels good to be the first one in our school history to do that,” said Manley, who has taken second and third at states the last two years. “I wanted to be on my own list, so that’s pretty cool. Now I’ve just got states to look forward to and chase the goal I’ve been chasing since I started wrestling, the state title. I feel like I’m definitely on the road to do that.”

“He should be very happy, very proud of himself for what he’s done,” Altoona coach Joel Gilbert said. “I know we are as a coaching staff and the school district.”

The area’s other finalists weren’t as fortunate. Hollidaysburg’s Nathan Swartz (138) and Hunter Gill (285) and Altoona’s Parker McClellan (195) had to settle for second with losses in the finals.

Six area wrestlers advanced to the PIAA Championships, which start on Thursday at the Giant Center in Hershey.

Altoona has four of the six, as Hunter Hileman (120) and a banged-up Brinton Simington (170) finished third. The top three at every weight advanced to states. The four qualifiers match a school record, with the last time being in 2013.

“That’s a great day,” Gilbert said. “I thought we really wrestled well. I was real happy with our performances.”

The Mountain Lions finished fifth in the team standings with 87.5 points. Cathedral Prep repeated as team champion, winning by 22 points over a rising DuBois, 140-118.

Hollidaysburg senior Dalton Long (145) and sophomore Mason McCready (182) dropped heartbreakers in their consolation finals bouts, placing fourth and coming up one win shy of making it to Hershey.

Manley (21-0) reached the finals with a pin of Cathedral Prep’s Spencer Staab in 1:58 in the semis. In the finals, he fought off a couple of Ho takedown attempts and a jaw or ear problem that forced a blood timeout.

“I hurt my jaw wrestling last week, and at the beginning (this week), he shot and hit it a little bit,” Manley said. “I honestly thought my ear was bleeding a little bit. It’s good now, though.”

Manley, though, set his offensive tone with a sweet duck-under for a takedown with 15 seconds left in the first period. Up 3-1 in the second, Manley spun behind Ho at the edge of the mat for a takedown for a 5-1 lead.

“I was attacking the whole time,” Manley said. “I’ve wrestled him before, so he knew what I did. He was trying to shut me down and try to get some of his stuff working. I had to find out another way to win.”

Manley took a 5-3 lead into the third, but he scored two more takedowns with his duck-under move.

“He wrestled a good match, a smart match,” Gilbert said. “They had a great gameplan against him. It was more of a stay-away, cat-and-mouse game. Cole adjusted and began to work his things, get to his ties and began to score. He’s going to find those kinds of guys at the state tournament, and we have to be able to beat those guys down there. I think that was really good to get that match in tonight.”

Swartz beat Bald Eagle Area’s Seth Koleno for a district title, but Koleno avenged that loss, 10-3, in the finals.

After rallying from down 3-0 to beat St. Marys’ eventual third-placer Alec Bittler in the semis, Swartz struck first with a takedown of Koleno in the first period. But Koleno escaped, took Swartz down and put him on his back with a low-leg cradle at the end of the period. Koleno led 6-2 at the end of the first.

Swartz couldn’t bring Koleno down to the mat from the top position in the second, and he was penalized two stalling points, the last coming with 3 seconds left in the period. A caution point to start the third made it 9-2. Swartz received a stalling point, and Koleno escaped to set the final.

“He had some things happen in that match that took his focus away from the actual competition,” Hollidaysburg coach Mike Moore said. “You can’t do that. If you take your mind out of it, you find yourself in a pretty big hole trying to climb out of. So, he’s got to do a better job of that.”

“Parker McClellan ran into a buzz-saw tonight,” Gilbert said. “We knew Laird was really good. We wrestled him earlier in the year. I thought Parker had a great tournament.”

Gill reached the finals with a pin of Perry’s Malik Townsend in 2:21, but DeBoe, a returning regional runner-up, was tough to score on throughout the tournament. He took Gill down twice, the last time right before the final buzzer, to win, 5-0.

“DeBoe is very good,” Moore said. “He’s one of the top heavyweights in the state. He got a takedown when we were probably being too aggressive (in the first period). That was a big takedown. Hunter has some adjustments going down to Hershey, but he’ll make those adjustments.”

Hileman punched his ticket to Hershey with a 1-0 win over Cathedral Prep’s Andrew Stark.

Hileman, knocked into the consolations with a 5-0 ultimate tiebreaker loss to St. Marys’ eventual champion Tyler Dilley, defeated State College’s Jacob Pammer, 3-0, in the consolation finals. In the consy finals, he escaped with 21 seconds left in the second and rode hard the entire third for the win.

“Out of all of the guys, I’m probably more ecstatic for him,” Gilbert said with a laugh, “because with Hunter, you never know what you’re going to get sometimes. He was phenomenal on his feet. Nobody took him down.”

Simington lost his semifinal to Cathedral Prep’s Luigi Yates, 3-0, and he injured his left knee in the process. He, however, gutted out a 7-2 win over Mifflin County’s Austin Haubrick in the consy semis, and the limp was hardly noticeable in a 5-3 win over McDowell’s Lilyaz Veysalov in the consy finals.

“He sucked it up,” Gilbert said. “He did what he had to do, got to his takedowns and wrestled his match out there. (The injury) is nothing too bad. He might have strained a ligament or something that of nature.”

When the bout was over, he got a big hug from Gilbert, and his dad, assistant coach Meade Simington, fought back tears as he followed his son off the mat.

“I think there were a lot of people who had happy tears,” Gilbert said with a laugh. “Those are the tears we like to see, not the sad tears.”

“That round was painful,” Moore said. “You always have those year after year, and they don’t get any easier.”

Philipsburg-Osceola’s Levi Hughes (138) and Micah Sidorick (220) lost in the consolation semifinals, while Josh Hubler (182) fell in the consy quarterfinals. Hollidaysburg’s Gus Dellinger (195) was stopped in the first round of consolations.