Hayward gets CC to next round 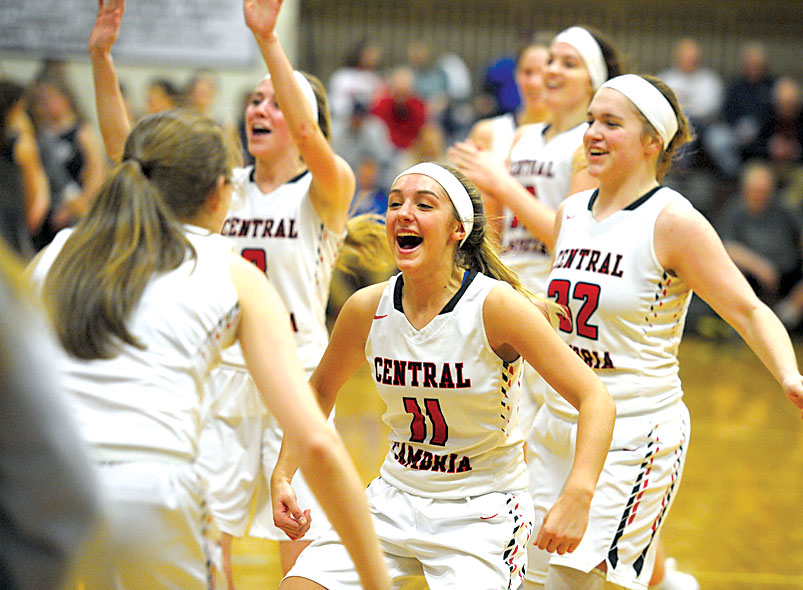 03/12/19 By GAry M. Baranec Central Cambria's McKenna Hayward (center) comes off the court after their win over Shady Side Academy Tuesday at Greensburg Salem High School. (on left is Paige Wess on right, Cassidy Bezek)

GREENSBURG — McKenna Hayward was hoping for a rematch with Penns Valley. She’ll have to settle for another opponent.

Because the Lady Red Devils (19-7) are moving on just the same.

Central Cambria, the third-place team in District 6 after losing to Penns Valley in the semifinals and beating Tyrone in the consolation game, advance to the PIAA quarterfinals Friday against WPIAL sixth-place finisher Beaver (19-5) at a site to be determined.

“We’re hoping to have a rematch with Penns Valley because they knocked us out of a chance to win districts,” McKenna said shortly after emerging from the locker room with a huge grin, not knowing at the time that the District 6 runner-up Rams had been beaten by Beaver, 62-59, in another second-round game.

The loss to Penns Valley likely will be a distant memory to McKenna and her teammates, now that Central Cambria’s season marches on.

Cassidy Bezek added 11 points for Central Cambria, which shot 20 for 27 from the free-throw line, including 13 for 16 in the fourth quarter, when the Red Devils outscored Shady Side Academy, 19-15.

“We played very well as a team and we converted our free throws at the end,” Hayward said. “It might be the best we’ve done on the line this year.”

Central Cambria coach Brittany Sedlock was impressed with her team’s approach from start to finish.

“It took everything we had for four quarters to beat them tonight,” Sedlock said. “The girls did a great job of holding their composure, managing Shady Side’s runs, holding it together and playing team basketball.”

Shady Side Academy senior Ariana Goitz led the Indians with 29 points to finish her high school career with 1,013.

“She had no idea she was approaching 1,000,” said Shady Side Academy coach Amy Szlachetka, who announced her retirement afterwards.

Szlachetka, led the Indians (20-5) for the past three years in her second stint, previously coaching Shady Side Academy for 10 seasons from 2000-10.

“Our last two seasons, we didn’t make the playoffs,” Szlachetka said. “It was a three-year rebuild.”

After the teams played to a virtual first-half tie — Central Cambria led at halftime, 24-22 — and held the two-point margin through three quarters, the Red Devils seized control midway through the fourth quarter with an 8-0 run after Bezek’s three-point play put them ahead for good, 54-51.

The second half was played at a furious pace. Central Cambria came away in the third quarter with another two-point lead, 44-42, after the teams battled to a 20-20 stalemate.

Hayward scored 11 points in the third, including three 3-point shots.

Both coaches prasied Hayward, marveling at her latest performance.

“I can’t say enough,” Sedlock said. “McKenna Hayward works hard in practice. No one wants to win as much as she does. Her career high came at a good time.”

Said Szlachetka: “We knew she was good. We expected her to give us trouble. We couldn’t stop her, but we tried to contain her. Obviously, we didn’t do a very good job.”

Jenna Bauer’s short jumper at the first-half buzzer gave Central Cambria a 24-22 lead at the break.

The Red Devils scored the first five points of the game and built a 9-3 lead midway through the first quarter en route a 15-9 advantage heading to the second.

Shady Side Academy used an 8-2 run at the start of the second to take an 18-17 lead, but the Indians couldn’t keep the advantage.

Hayward’s layup for Central Cambria tied it at 22-22, and Bauer’s first basket of the game beat the halftime buzzer to give the Red Devils their slim, two-point lead.