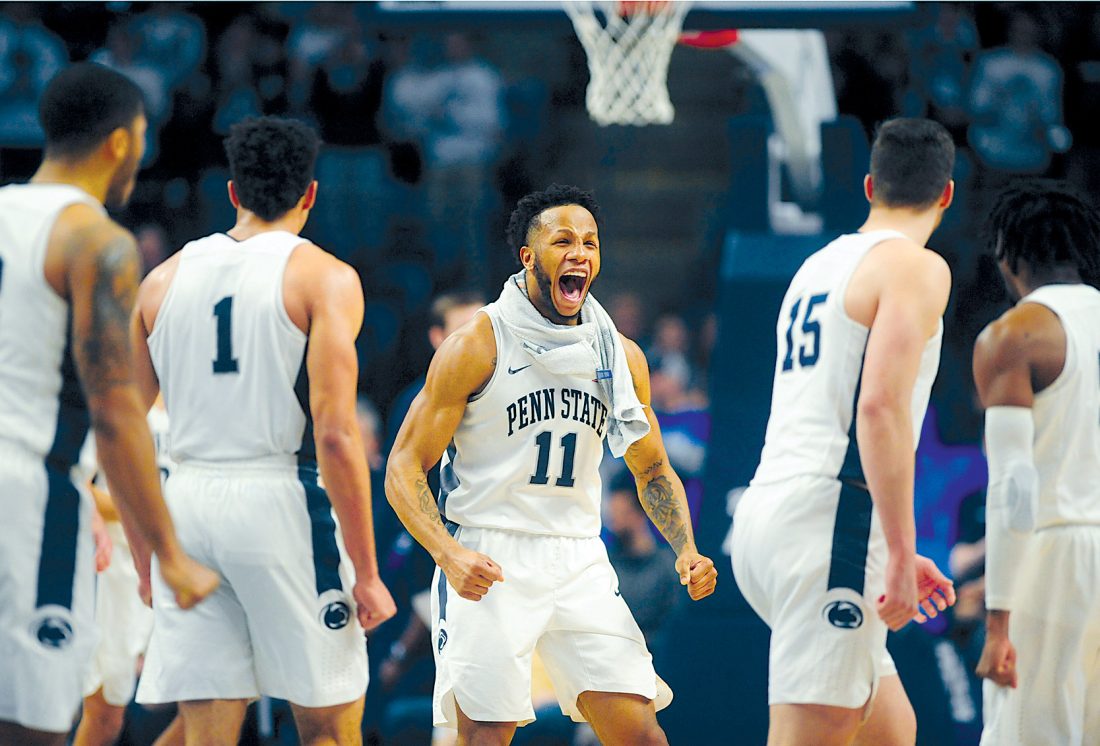 UNIVERSITY PARK — In what has become a common theme this season, Penn State star Lamar Stevens struggled with foul trouble again on Saturday.

On the heels of three-straight losses, the Nittany Lions could not afford to be without the senior’s production against No. 21 Ohio State.

Coupled with Stevens scoring 24 points in just 22 minutes, the freshman Lundy, making just his second start of his career dropped 12 points on three 3-pointers as the Nittany Lions defeated the Buckeyes, 90-76.

“He’s shooting the ball particularly well right now,” Penn State coach Pat Chambers said of Lundy. “He made some big ones for us today.”

Lundy actually opened the game by converting just one of three attempts from the free throw line after being fouled on his opening attempt.

However, he quickly rebounded, knocking down a triple to give Penn State and early 10-4 lead at the first media timeout.

Lundy was coming off a career performance in his first career start during the loss to Minnesota on Wednesday when he also made 3-of-6 from beyond the arc and scored 15 points. Chambers said on Thursday that Lundy had played well enough to deserve another start.

“He’s a super confident kid,” Stevens said of Lundy. “He stepped up in big situations. Coach put a freshman in a tough spot.”

Stevens also remarked at Lundy’s intensity on floor, which showed up in the box score on Saturday with five rebounds and two blocks, one on an acrobatic play at the rim from behind.

John Harrar, who also stepped into the starting lineup for the first time on Wednesday, rewarded Chambers’ decision with a season-high 21 minutes, six points and five rebounds.

All of this while guarding Ohio State forward and leading-scorer Kaleb Wesson, one of the best players in the Big Ten.

Chambers even called a play for Harrar, which turned into a dunk out of a timeout.

Strong performances from Penn State’s role players were even more important because Stevens was not the only Penn State player with foul trouble.

In a game that was seemingly dominated by the referees, five Penn State players had three or more fouls. The Buckeyes had six such players, including Andre Wesson, who fouled out with five.

But the Nittany Lions put together a balanced attack with four players scoring in double figures, including Myles Dread who made his first 3-pointer in two weeks and finished perfect from the floor, on his way to 10 points.

Ultimately, it was still Stevens who left his finger prints all over the game as he drove past the Ohio State defense and soared over three buckeyes for a huge dunk with just under 2:30 to play that likely sealed the win, up 14.

But for those 18 minutes when he wasn’t in the game, Stevens said he was basically a “cheerleader” from the bench.

“I just want to cheer my guys on and let them know I’m supporting them,” he said. “Just be the guy to support them and whatever it takes to get the win.”

Stevens and Lundy played together for one season at Philadelphia’s Roman Catholic high school, and the past two games may have been a sign of things to come for Stevens’ heir-apparent.

“As long as he continues that growth mindset and keeps learning,” Chambers said, “he’s only going to get better.”