Running away with it: Brown’s 202 yards carries Lions to win 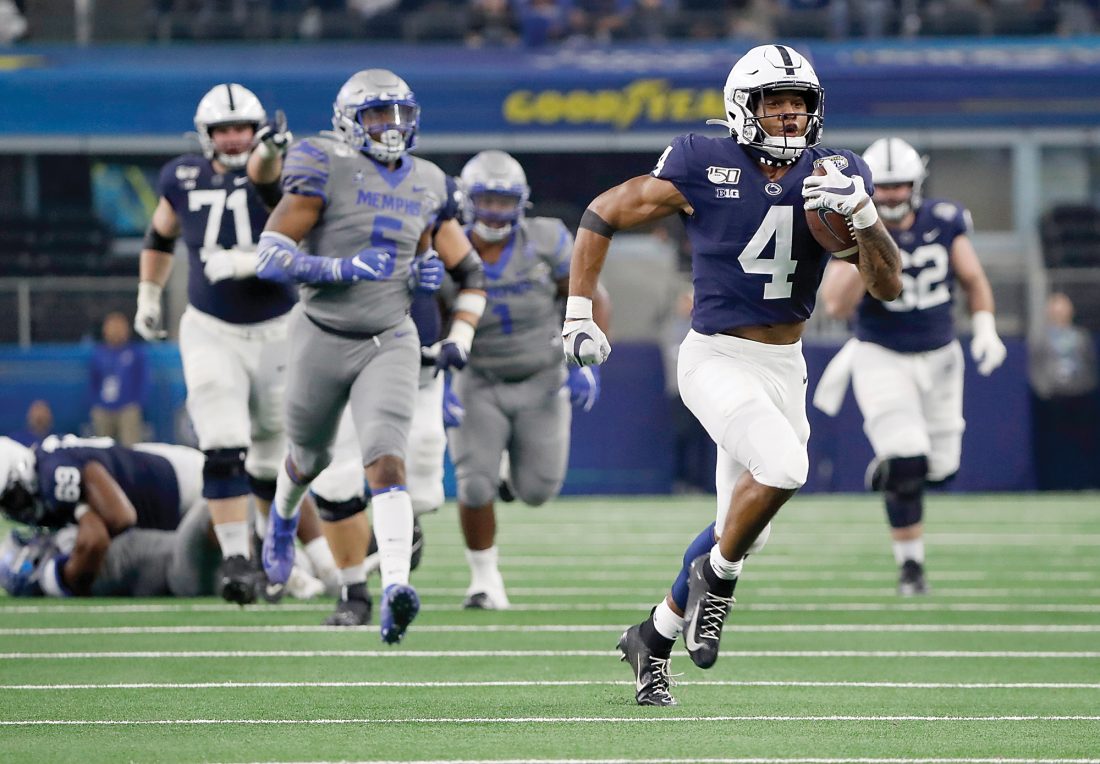 Penn State running back Journey Brown (4) runs with the ball during the first half of the NCAA Cotton Bowl college football game against Memphis in Arlington, Texas, Saturday, Dec. 28, 2019. (AP Photo/Roger Steinman)

DALLAS — Penn State ran all over Memphis in a wild and wacky Deep South shootout at the Cotton Bowl.

Journey Brown, who once ran for a staggering 722 yards in a high school game, gashed the Tigers’ defense with the biggest rushing effort in PSU bowl history. Brown’s journey to the Nittany Lion record books saw him run for 202 of the team’s 396 yards.

Penn State simply could not be stopped on the ground, but its passing game never really got going.

Memphis, on the other hand, torched the Lions’ defense for 479 yards through the air.

The contrasting offensive styles and generally poor defensive play led to a shootout, the likes of which the Cotton Bowl had never seen before in its 84-year history.

The No. 13 Lions did come up with a few huge defensive plays, and those combined with their strong ground attack paved the way for a 53-39 win over No. 15 Memphis before 54,828 fans at AT&T Stadium.

“The line up front, those big boys, they really set the tone,” said Brown, who broke Saquon Barkley’s PSU rushing record of 194 yards from the 2017 Rose Bowl.

“We said coming into this game (that) we want to control the pace. We want to go fast, we’ll go fast. If we want to go slow, we’ll go slow. With the wide receivers and tight ends blocking, the edges opened up for what I could do. So kudos goes to them for sure.”

The only thing that stopped Penn State’s rushing attack was some stubbornness in the playcalling.

Interim offensive coordinator Tyler Bowen did a solid job overall on the day with the team scoring 53 points. But in several peculiar situations, Bowen surprisingly went away from the run and had Sean Clifford throw, even though it had become clear the quarterback was having a tough day and the O-line couldn’t protect him well.

Clifford finished 11-of-20 for just 133 yards with one TD and one interception.

“A few drives, I thought we got away from the run,” PSU coach James Franklin said. “But besides that, I thought (Bowen) did an excellent job.

“Early on we missed some easy throws, and then we also had some drops,” Franklin later added. “So it was hard to get the passing game going the way we wanted it to. And then it was also hard not to keep calling the run as much success as we were having with it.”

At that point, a decision was made to go run heavy, and it paid off.

Clifford took off on some quarterback keepers, and the running backs destroyed Memphis’ defense with big gains, mostly right up the middle.

Noah Cain, who ran for 92 yards on 15 carries, gave PSU the lead for good with a 1-yard TD run early in the second quarter. Devyn Ford scored from 2 yards out a couple minutes later, and Brown busted free for a 56-yard score to make it 28-13 with 5:51 left in the half.

Penn State (11-2) appeared to be in complete control at that point, while Memphis was falling apart and looking like it would get blown out.

To their credit, the Tigers (12-2) regrouped in a hurry and answered with a touchdown on their next drive, giving them confidence that they could continue to compete with the Lions.

They could compete primarily because of quarterback Brady White, who threw for 454 yards while completing 32-of-51 passes. White also topped 4,000 passing yards for the season.

“Coach (Ryan) Silverfield just touched on it: We’re fighters, man,” White said. “No matter what, whether we’re up 50 or down, we’re always going to be battling. Everyone cares about every single play, and that’s that mentality we have.”

Both offenses moved the ball seemingly at will, but Penn State’s defense came up with several big stops that made a world of difference. Memphis kicked six field goals — Riley Patterson was perfect, including a 51-yarder — but the Tigers needed touchdowns out of at least a couple of those situations.

Linebacker Micah Parsons was phenomenal for Penn State, blowing up plays throughout the game to spark the defense. The consensus All-American had 14 tackles, three tackles for loss, two sacks and forced two fumbles, playing the best game of his career.

Penn State was up 35-23 at the half before Memphis scored the first 10 points of the third quarter.

It was 38-36 when Parsons and PSU safety Garrett Taylor produced the play of the game. Parsons blitzed to get pressure on White, who tried a desperation pass and instead tossed the ball in the air right to Taylor, who returned the interception 15 yards for a touchdown.

That gave the Lions a 45-36 lead, but Memphis still kept charging, coming right back for a field goal to pull within six.

Penn State then put together a game-clinching drive, staying primarily on the ground but also getting a couple of big throws from Clifford to convert third downs. His 20-yard pass to tight end Pat Freiermuth on third-and-5 from the PSU 44 was a crushing blow to the Memphis defense, and Cain finished off the drive with a 1-yard TD for a 53-39 lead with 6:31 to go.

The 53 points is a PSU bowl record.

Offensive line coach Matt Limegrover said there was a lot of confidence the Lions could run the ball on the Tigers, and that certainly turned out to be the case.

“You get 13 games (of tape) on a team, and we kind of knew through their (coaching) transition that they weren’t going to try and change a whole lot,” Limegrover said.

“We just kept feeding the beast, and obviously, Journey was ready to go today.”