A win is still a win: Lions avoid embarrassing loss 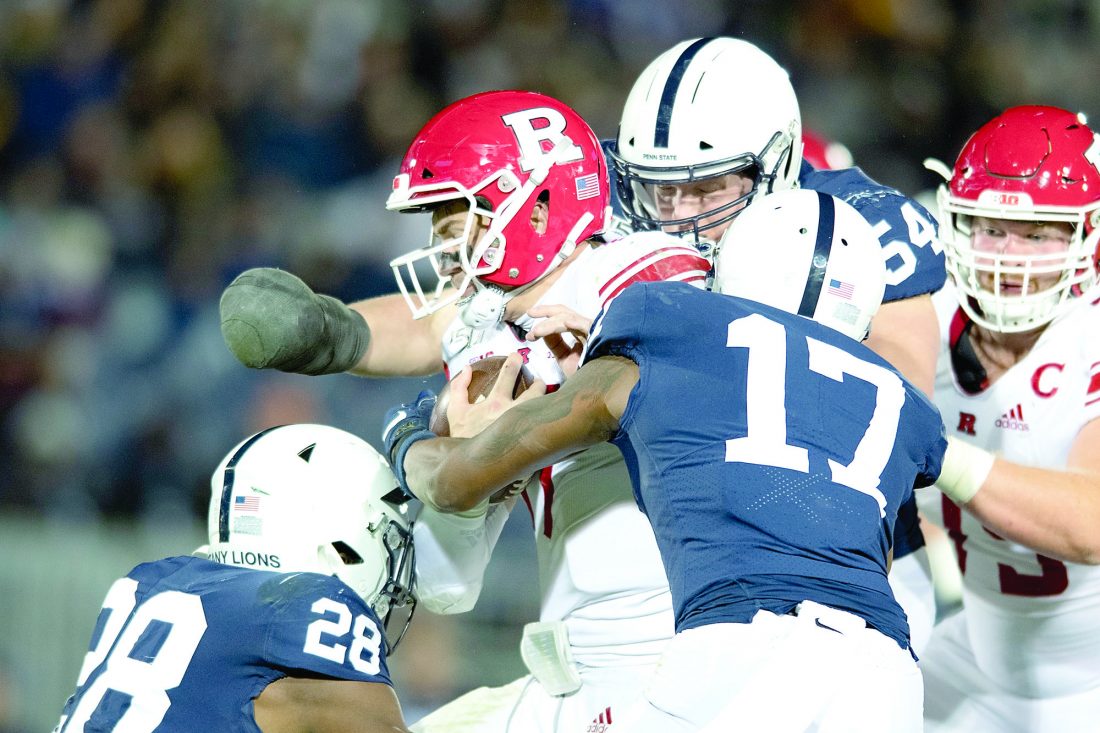 UNIVERSITY PARK — Rutgers outplayed Penn State for much of Saturday’s game, which was shocking and had to be maddening for fans in the Nittany Nation.

You know, because it was Rutgers.

The worst Power 5 team in the country, and it’s not even close.

There was never really much threat of PSU losing — again, because it was Rutgers. And once the No. 10 Lions started to assert themselves and figure some things out in the second half, they cruised to a 27-6 victory before 98,895 fans in the regular-season finale at Beaver Stadium.

Now, Penn State appears to be on the verge of going to the Rose Bowl, and that coupled with the team’s 10-2 record are really more important than looking pedestrian Saturday against the lowly Scarlet Knights.

“We’ve got a lot of respect for that program,” PSU coach James Franklin said. “They have given us fits for years. They have played us well, and there’s been battles.”

Penn State came into this battle short-handed, which in part explained why it played so, so far down to the opponent.

Starting quarterback Sean Clifford was on the sideline in street clothes, banged up from taking hits all season, so Will Levis got his first career start.

Standout defensive end Yetur Gross-Matos had his left arm in a sling and didn’t play. Cornerback Tariq Castro-Fields also sat out with an injury, and the other starting cornerback, John Reid, was knocked out of action early on after a collision with teammate Lamont Wade.

This nugget, from running back Journey Brown, also probably played a big role in what took place.

“I would say we kind of underestimated this team, which we shouldn’t have,” Brown said. “They’re a great team. They play hard. We just should have played to our standard, regardless.”

Rutgers, to be clear, is not a great team. It came in with a 2-9 record (0-8 in Big Ten) and massive struggles on both sides of the ball.

Just looking at the stats, you’d think Rutgers had either won the game or at least lost by a close margin.

The difference, though, was that Penn State got a handful of big plays, while the Scarlet Knights moved the ball but struggled finishing drives and couldn’t get into the end zone.

That chance for 11 could come in the Rose Bowl, thanks to how things played out Saturday.

Wisconsin, which has two losses, hammered Minnesota to win the Big Ten West and will face Ohio State in the league championship game. If the Buckeyes win that, Penn State should be the highest-ranked Big Ten team not going to the College Football Playoff.

There’s a chance the Rose Bowl could select Minnesota over Penn State. Both would have two losses and the Gophers beat PSU, but the Lions should be ranked higher in the CFP, so bypassing them would be tough to do.

If it’s not the Rose Bowl, Penn State could end up in the Orange Bowl or Cotton Bowl, both of which are premier destinations.

Penn State was a 40-point favorite, yet led only 7-3 at the half. The 21-point final margin was far less than what most would have expected, given how bad Rutgers has been all season.

Franklin was asked how he balances getting a win versus not beating a team as badly as most expected.

“Every single one of you guys could probably look up 25 games this year that people were supposed to do something and lost,” Franklin said. “Another 25 games that people had a tough game against an opponent that it’s tougher than it’s supposed to be. ? That’s every single level (of football).

“They played well tonight, we didn’t play as well as we could have,” Franklin added.

Levis and Brown carried the offense on the ground, both topping 100 yards rushing as PSU finished with 252. Levis carried 17 times for 108 yards, while Brown had 16 carries for 103 yards and scored three touchdowns, including a 33-yarder.

Brown had an emotional week as his 17-year-old cousin died, and that motivated him for the game.

“That first touchdown, I knew I was playing for him today,” Brown said.

Levis again showed he’s a hard-charging runner, as he did when he replaced Clifford last week at Ohio State, but he struggled throwing the ball. He completed 8-of-14 for 81 yards with one TD and one interception, which was underthrown, as was another deep pass that KJ Hamler couldn’t grab.

“I have the arm strength, I just babied a couple of them, honestly,” Levis said of those throws.

Levis was good on the ground, but ironically broke the game open with a throw. Leading 13-6 early in the fourth quarter, he scrambled to his left and fired a strike to a wide-open Jahan Dotson inside the 10, and the receiver ran it in.

The Lions scored again on their next possession to turn what had been a close game into a score that looked a little more lopsided.

Levis said he first learned he was going to start on Tuesday, when Clifford pulled him aside.

“Sean pulled me over and actually told me first, told me he had some medical things he had to take care of,” Levis said.

“It was cool. Obviously as a backup you’ve always got to prepare like you’re the starter, but to kind of know that was going to happen for sure, that I was going to be the starter and kind of set the tempo for the whole game, it was really cool.”