Franklin weighs in on whether he’s underappreciated by PSU fans 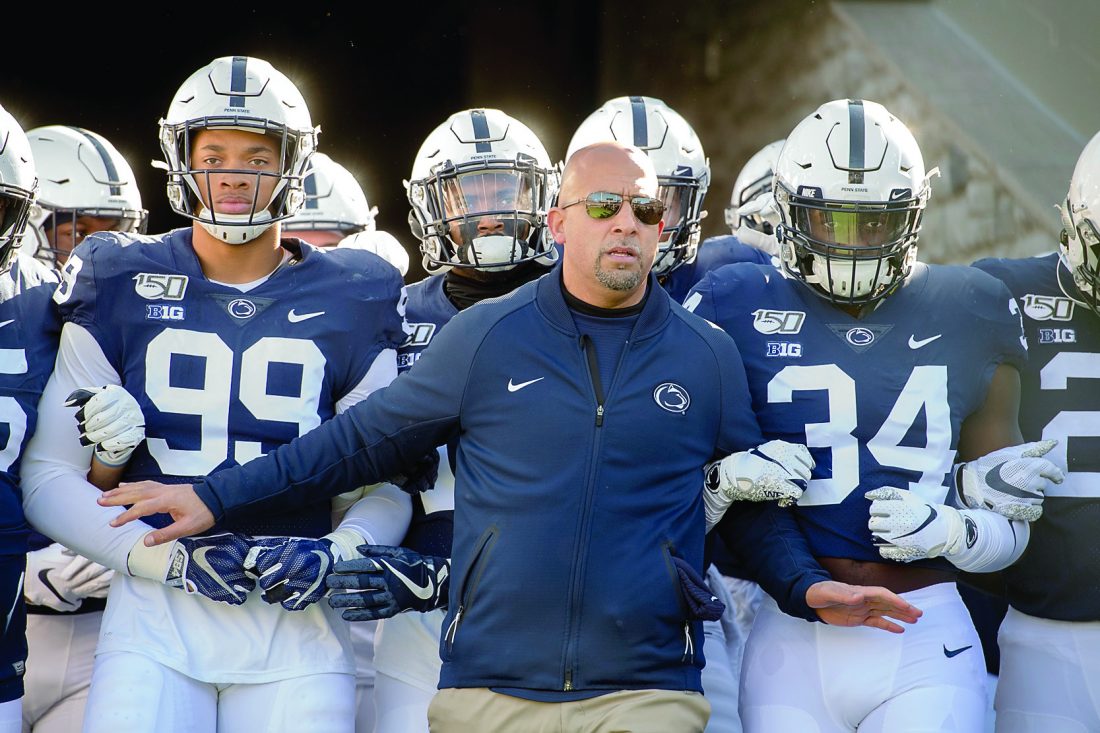 The Associated Press Penn State coach Jamess Franklin gets ready to lead his team onto the field against Indiana at Beaver Stadium.

As the regular season winds down, we’re at the time of year when James Franklin’s name is starting to be mentioned for other potential jobs — USC and Florida State specifically this year.

Franklin obviously has earned a lot of respect and appreciation nationally. But is the coach appreciated as much by Penn State fans for what he’s accomplished during his tenure?

“I think he’s really underappreciated and really doesn’t get enough credit for everything he does for this university,” punter Blake Gillikin said on a conference call Tuesday.

Franklin was told of Gillikin’s comments a bit later on and was asked if he feels underappreciated.

“Yeah, my wife thinks so,” the coach started off by saying. “But about that, that’s the only person I really hear from is my wife and the coaches and the staff, and my daughters come to practice a lot.

“I will tell you this: I think being a football coach and being in the building, it’s like being in a submarine, and I think there’s positives to that because you get insulated from a lot of things. The social media and the phones and stuff like that change that and kind of bring that world within the submarine, but only if you choose to. You don’t have to look at your phone.”

Franklin continued by saying that what the players think is his primary concern. But a moment later, he did share some personal thoughts on how the outside world views him.

“But I am probably getting to a point where I’m pretty confident. If you look at what we’ve done since we’ve been here, there’s a lot to be proud of, and everybody should feel that way. … Our record stacks up pretty good against pretty much anybody. You know, we’re in a good place. I’m in a good place. I want to get better. We want to get better.”

Franklin was asked if he believes in moral victories, coming off a PSU’s 28-17 loss at Ohio State in which the Lions nearly rallied all the way back from being down 21-0.

“No, there are no moral victories,” he said. “I mean, we’ve played that team as well or as good as anybody in the country, but not well enough.

“There are no moral victories. There’s positives, which I showed the team on Sunday. There’s positives to be seen. There always is. Each week we do that on Sundays. We show clips of championship habits, of plays that when we’re all working together and focused and executing who and what we can be and we show them.”

Quarterback Sean Clifford will be a game-time decision Saturday against Rutgers. He was knocked out of Saturday’s loss to the Buckeyes with a leg injury, although Franklin said he could have returned to play.

Backup Will Levis looked good running the offense upon replacing Clifford, though Levis struggled down the stretch as Ohio State’s defense made adjustments and pressured him trying to throw.

“I really could see a situation where Will plays this week,” Franklin said. “Now, how much he plays, I’m not sure. But I could see us playing Will this week, and Will is going to have to get a little bit more reps in practice just because Sean is not ready to take the normal amount of reps that he normally would.”

The Lions, at No. 10 in the College Football Playoff rankings, still have a very good shot at the Rose Bowl.

If Wisconsin wins at Minnesota this week, PSU would be in great shape to go to Pasadena. That would give the Gophers (now No. 8) two losses, and they likely would drop below the Lions in the CFP rankings, even though they beat Penn State head to head.

If Ohio State then were to beat Wisconsin in the Big Ten title game, Penn State almost certainly would be the highest-ranked Big Ten team other than the Buckeyes.

If Minnesota beats Wisconsin, then loses to Ohio State, the Gophers likely would get the Rose Bowl bid. In that situation, Penn State still could be selected for the Orange Bowl, and the Outback Bowl would be the other possibility.