Dreams of Fields: Nittany Lions once flirted with OSU’s QB 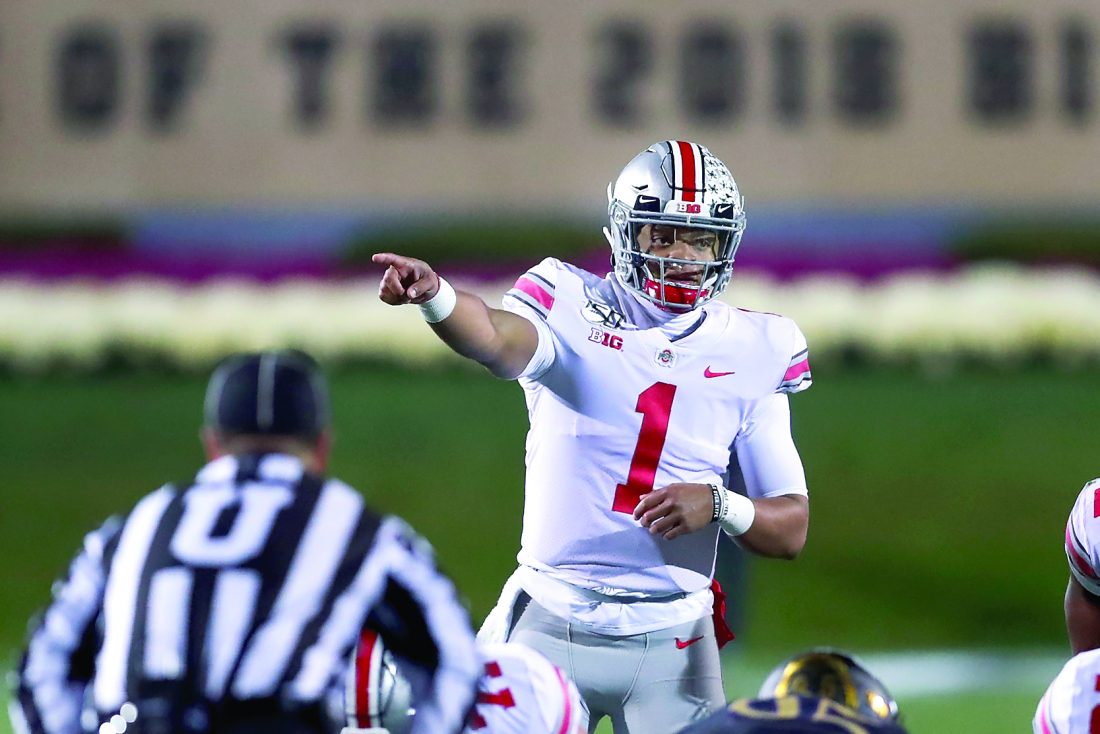 Ohio State quarterback Justin Fields points out the defense during the first half of an NCAA college football game against Northwestern Friday, Oct. 18, 2019, in Evanston, Ind. (AP Photo/Charles Rex Arbogast)

In some alternate universe, where different decisions were made, Justin Fields will be starting at quarterback for Penn State on Saturday at Ohio State.

It sure would be fun to see what that dynamic could look like.

It almost really happened, too.

But then, Fields went and got very, very good. So good that Penn State being involved in his recruiting process very early didn’t matter once a bunch of other powerhouse programs came calling.

Think of it like this: Remember how Saquon Barkley had committed to Rutgers? You know, before he became the Saquon Barkley we now know. Rutgers got involved early with Barkley, he wasn’t yet an otherwordly talent, and he was committed to that program for a total of 165 days before flipping to Penn State.

At one point during his high school career, Fields, who’s from Georgia, was so far off the radar that he was merely hoping to get an offer from Mercer, an FCS program in the state.

In July of 2016, the summer before his junior year of high school, Fields attended a camp at Penn State and received an offer from the coaching staff. The hope was that he would, someday, potentially star in Joe Moorhead’s high-powered offense with the Nittany Lions.

But then Fields blew up as a prospect during his junior season. He had grown from 5-foot-11 to 6-3, began to excel on the field and started getting calls from a lot of other schools.

Including Georgia, his home-state school.

“(Moorhead’s) offensive mind for me was like, OK, you can excel under this coaching,” Field’s mother, Gina Tovey, told Cleveland.com. “But we knew how good he was, and we read that he was a target for a head coaching job.

“As much as he said, ‘No, no, I’m not going to do it, we were like, I think it’s coming sooner rather than later, and then we don’t know what we have.”

The possibility of Moorhead leaving, which he ultimately did for Mississippi State, forced Fields to change his mind and decommit from Penn State.

“It’s really like breaking up with your girlfriend,” Fields told reporters in Ohio this past week. “Say if you have a good relationship with her, you don’t want to break up with her, but you might have to because of circumstances outside.”

In June of 2017, Fields made up his mind and called to tell Franklin that he was decommitting.

“Before I called coach Franklin, I was nervous,” Fields said. “I was like, ‘Ugh, I don’t want to do this right now.'”

Fields addressed his situation on Twitter at the time by writing:

“This is probably the hardest decision I’ve ever had to make. “My decision to reopen my recruitment is in no way a reflection of any deficiencies of PSU, its coaches, players or fans.

“I still believe that PSU is a great academic and athletic opportunity for any student athlete and it will remain one of the top schools that I would consider. I know that I will disappoint some people by my decision and for that I apologize. This decision was not easily made.”

Fields, who progressed to eventually become the No. 2 recruit in the country, settled on Georgia in the recruiting process. He went there for a year, sat behind Jake Fromm last season and decided to transfer.

He wound up picking Ohio State, won an appeal to be eligible immediately and is in his first season starting for the Buckeyes.

Fields is having an incredible year, with 31 TD passes and only one interception, to go along with 2,164 yards passing. He’s also rushed for 377 yards and 10 TDs.

Fields would be, without question, the ideal quarterback for Penn State’s RPO system.

Franklin and Moorhead saw that early on.

But it just wasn’t meant to be.

“Obviously we were involved with him early, had a significant relationship for a long time,” Franklin said of the quarterback. “Obviously very talented guy. You come up with your list of things that you’re looking for in terms of characteristics, height, weight, speed, intelligence, release, accuracy, touchdown-to-interception ratio, win/loss percentage, all the things we look at when we’re evaluating and studying quarterbacks, watching him in games, watching him in practice, throwing live, he checked a lot of boxes.

“Based on what I’m seeing on film right now, I think we were right. He’s pretty good.”

Three PSU stars up for Hall of Fame honor