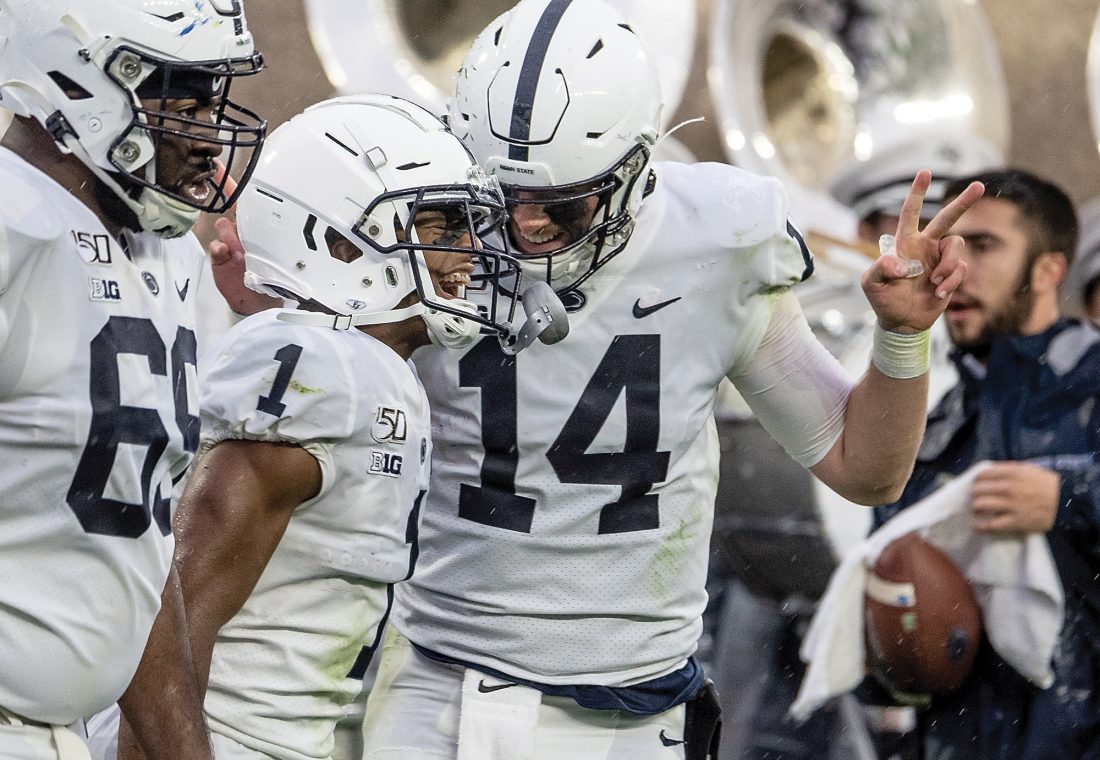 EAST LANSING, Mich. — We’ve come to expect quality showings from Michigan State against Penn State, which is why so many people felt Saturday’s contest was the classic trap game.

The No. 6 Nittany Lions played a strong first half against a surprisingly listless MSU squad and cruised to a 28-7 win on a rainy Saturday afternoon at Spartan Stadium.

“We don’t really look at it as a trap game,” said PSU quarterback Sean Clifford, who threw four TD passes.

“We don’t pay attention to what everybody says about games. … When we preach 1-0 (each week), I’m sure that people think it’s cliche. But that’s what we talk about in our locker room.”

Penn State (8-0, 5-0 Big Ten) had lost the past two meetings against Michigan State (4-4, 2-3), and the Spartans were coming off a bye week. Many figured it would be a close game — the point spread favoring PSU dropped from 6 ¢ to 4 over the past couple of days — but the Lions took charge early behind Clifford, tight end Pat Freiermuth and a strong defense.

Clifford lofted a gorgeous 16-yard TD pass to Freiermuth on PSU’s second possession, then capped a long drive with a 19-yard scoring strike to the tight end on the next possession. Clifford later connected with KJ Hamler from 28 yards for a 21-0 halftime lead.

The Lions didn’t do much offensively in the second half in tough, rainy conditions, but they didn’t have to because their defense was having its way with Michigan State.

“We were able to score enough early on in the first half before things got messy,” Penn State coach James Franklin said.

Michigan State muffed a punt deep in its own territory early in the third quarter, giving the Lions the ball at the Spartans’ 6. Freiermuth caught his third TD pass of the day on the next play for a 28-0 lead.

That touchdown grab was the 15th of Freiermuth’s PSU career, tying Mike Gesicki’s school record. That’s a remarkable feat for Freiermuth given that he’s only a sophomore and is now in position to shatter the record.

Making things even better, Friday was Freiermuth’s 21st birthday, so he enjoyed quite a weekend.

Freiermuth is considered by many to be one of the best tight ends in the country, and he had 20 catches for 231 yards and four scores on the season entering Saturday. He had a big day with five catches for 60 yards and the three TDs.

It was not, however, necessarily the Lions’ game plan to get the ball to Freiermuth more against the Spartans. That’s just how things worked out in PSU’s RPO offense, as Clifford took what the defense gave him by connecting with the tight end on several big throws.

“Pat played a great game,” Clifford said. “People see the three touchdowns, but at the same time, he was coming through blocking, running guys off when he needed to.”

Clifford’s first TD pass to Freiermuth in the first quarter was a thing of beauty, with the quarterback floating a pass to an open spot in the right corner and the tight end running underneath it for the score.

“That was an awesome throw,” Freiermuth said. “It just fell right into my hands.”

Freiermuth caught a pass at the 5-yard line and powered his way into the end zone for his second touchdown. He really wanted to score on that play and said, “Kind of having flashbacks to Iowa with the knee down,” referring to a controversial call that negated what appeared to be a score against the Hawkeyes earlier this season.

Clifford finished 18-of-32 for 189 yards and four scores, but he also threw one really bad interception that angered him and Franklin. (See notebook on Page B2 for more on that.)

The Lions didn’t have a great day running the ball, gaining 113 yards, led by Journey Brown’s 45. Noah Cain got his first start at tailback but suffered an injury after two series and didn’t return.

Penn State’s defense made things tough on Michigan State all day. Quarterback Brian Lewerke threw for 400 yards the last time PSU visited here two years ago, but he was just 16-of-34 for 165 yards and one interception Saturday.

The Spartans ended PSU’s shutout bid midway through the third quarter, set up by a 49-yard pass from Lewerke to Cody White. Anthony Williams finished off the drive with a 4-yard TD run.

Clifford threw his interception on PSU’s next series, giving Michigan State a chance for more momentum as it took over at its own 31. But Lewerke threw a bad interception on the very next play to kill that opportunity, and the Spartans never threatened the rest of the way.

Penn State now enters its second bye week of the season, and a trip to undefeated Minnesota awaits in two weeks.

“This bye week is probably going to be a big help for us,” receiver KJ Hamler said.