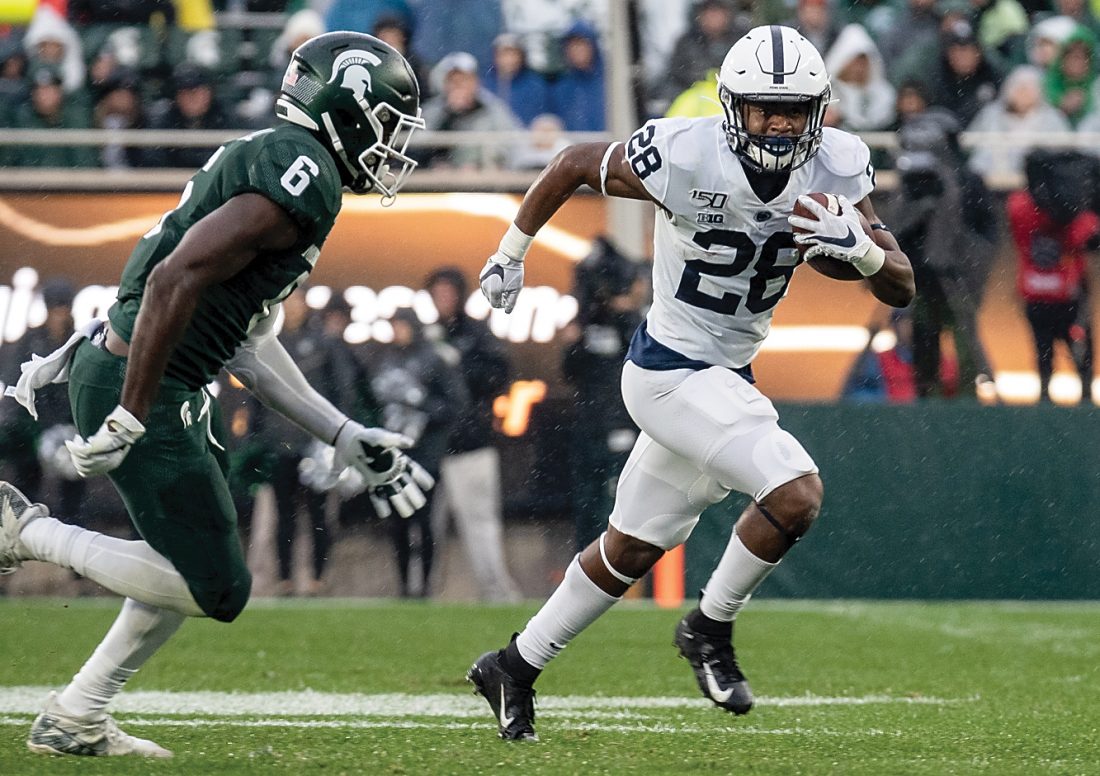 Photo for the Mirror by Isaac Ritchey Penn State running back Devyn Ford breaks loose for a long run during Penn State’s victory.

EAST LANSING, Mich. — Following are the highlights and lowlights from Penn State’s 28-7 victory over Michigan State on Saturday at Spartan Stadium:

Play of the game: Facing fourth-and-1 at the Michigan State 45 with 2:38 left in the first half, leading 14-0, Penn State went for it, and Journey Brown gained a yard. Three plays later, Sean Clifford found KJ Hamler for a 27-yard touchdown that pretty much put the game away.

Defensive player of the game: Sophomore linebacker Micah Parsons recorded a game-high 12 tackles and broke up a pass.

Most deceiving statistic: PSU was tagged with 104 yards on nine penalties compared to the Spartans’ 31 on four flags.

Hidden statistic: The Lions’ average field position was their 42. Michigan State’s was its 19.

Best run: Devyn Ford danced outside for a 16-yard gain in the second quarter, the longest rush on the day by either team. Never mind that it was brought back for a hold on Jahan Dotson. Ford showed his slick feet and vision.

Best pass: It appeared up for grabs and into a crowd, but Sean Clifford’s first touchdown to Freiermuth that opened the scoring (from 16 yards) was well placed.

Worst pass: Clifford, flushed left, hoisted one across his body into a crowd of Michigan State defenders in the third quarter, and it was picked off by David Dowell.

Best catch: Clifford’s snag of the high snap on the fourth-and-1 may have been it.

Hold it, won’t ya: Hamler fumbled the opening kickoff, but Jesse Luketa alertly recovered. Clifford muffed a snap but recovered it. Both paled next to Michigan State’s Brandon Sowards, who fumbled a PSU punt at the Spartans’ 6 in the third quarter, and Chisena recovered, setting up the Lions’ 28-0 lead.

Best kick: How about Blake Gillikin’s game-opening 58-yard punt, one of five he downed inside the Spartans’ 20.

Blown coverage: Cody White got behind the Penn State defense for a 49-yard reception in the third quarter.

Worst penalty: Up 21-0, Parsons was called for offsides on fourth-and-1 during a late second-quarter punt attempt from midfield, giving the Spartans a first down. The Lions weren’t even trying to block it.

Worst call: On fourth-and-2 from his own 44 with 25 seconds left in the first half, down 21-0, Spartan coach Mark Dantonio called timeout and then punted. Huh?

Best effort: Both of Oweh’s tackles resulted in forced fumbles.

Unsung hero: Pressed into service due to injuries at cornerback, true freshman Marquis Wilson made five tackles and an interception.