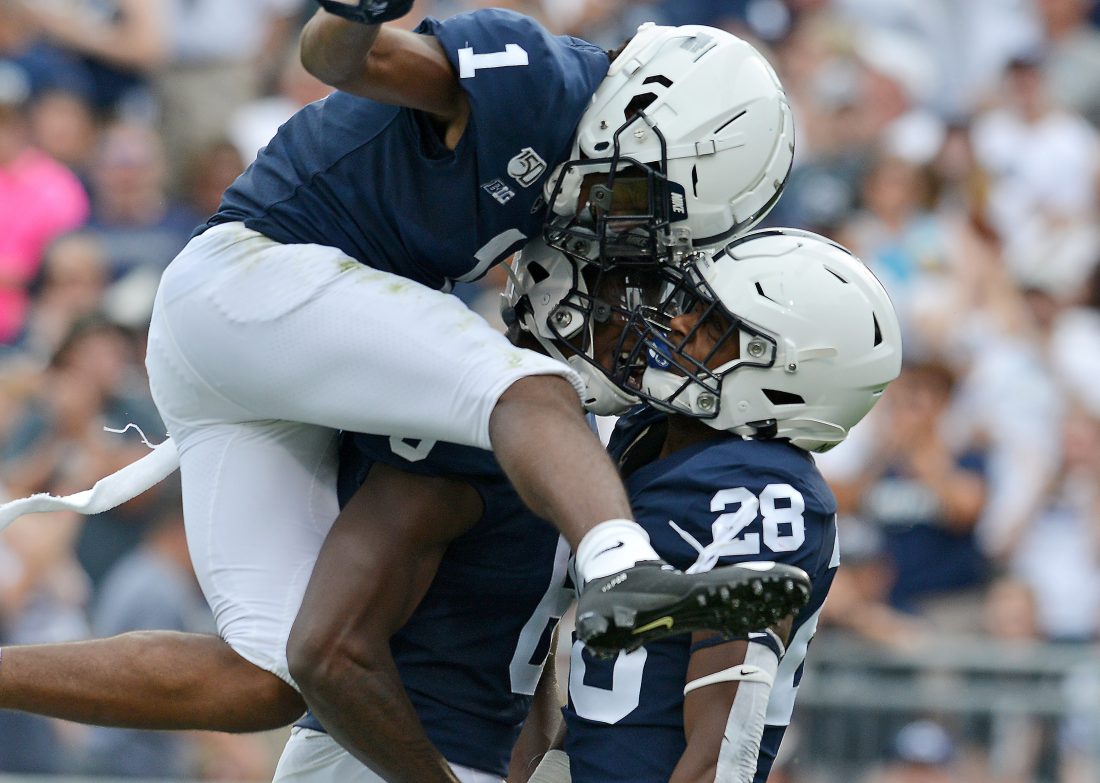 UNIVERSITY PARK — You can add Idaho to the list of all-time worst opponents to ever play at Beaver Stadium, but then, Penn State’s season opener was never going to be judged on the final score against a vastly overmatched FCS foe.

This was a glorified scrimmage for the Nittany Lions, a chance to get a lot of players some experience and to break in new starting quarterback Sean Clifford. Doing all those things and keeping everyone healthy was really the goal.

The scoreboard read 79-7 at the end of Saturday’s beatdown before 104,527 fans. It was PSU’s most points in a game since the infamous 81-0 shellacking in 1991 against Cincinnati, considered by many to be the worst opponent ever to visit Happy Valley.

The Lions could have vandalized the Vandals for more than 100 points had they kept their foot on the gas, but instead, backups played most of the second half for PSU.

“It just shows a lot of people can play, even from freshmen, it doesn’t matter what age group you are,” said KJ Hamler, who caught two TD passes and finished with 115 receiving yards.

Clifford overcame early nerves to finish 14-of-23 for 280 yards and two TDs, both to his longtime buddy Hamler.

The Lions finished with 673 yards of total offense — 342 passing and 331 rushing, which is about as balanced as it gets.

Coach James Franklin said all four of his running backs would play a lot this season, and the Lions went one further than that Saturday as five different tailback scored a touchdown.

“They played really well,” Franklin said of his young core of running backs.

Devyn Ford electrified the stadium with an 81-yard TD run down the left sideline early in the second quarter, as the Lions were on their way to a 44-0 halftime lead. The point spread coming into the game was 41 ¢, so PSU had that covered by intermission.

It was 65-0 before Idaho took advantage of a muffed punt by PSU’s Mac Hippenhammer to break up the shutout. The Vandals recovered at the Lions’ 25 and got into the end zone two plays later.

Aside from that quick sequence and a couple of other nice gains, Penn State’s defense dominated Idaho. The Vandals totaled just five first downs and 145 yards of offense, and again, the Lions played backup defenders for much of the second half.

Penn State had seven sacks, 11 tackles for loss and one interception on the day.

“We played shutout football on defense, although the scoreboard doesn’t necessarily show that,” Franklin said.

So, what did the Lions learn about themselves from the game?

“We got a lot of people in who don’t get a lot of reps, but it was great to see a lot of the younger guys and people who help us out on scout team get in and play and produce,” Hamler said.

“Getting these first-game jitters out of the way and really calming down and settling in,” Clifford said.

It may have looked like PSU did absolutely everything right in the blowout, but that’s never the case in any game. Senior cornerback John Reid, who had an interception, said learning how to find the mistakes in this kind of game is paramount to getting better as a team.

Hamler learned something in the game, and it came from an unlikely source.

“I learned a lot from the other team, as well,” Hamler said.

“One of the players came up to me and actually gave me a tip on my splits and how they can read some plays, and I thought that was very cool because I never had a player do that. … I appreciated it, though. It’s something I never experienced before, but I really appreciate that. I said that to him. I respect it.”

The game featured many superlatives by many players.

Ford ran for 107 yards on only six carries, highlight by his 81-yard score. On that play, receiver Justin Shorter did a nice job of blocking deep downfield to ensure the touchdown.

Backup quarterback Will Levis saw his first collegiate action and completed 11-of-14 passes for 62 yards and one score in the second half.

The Lions also made all three field-goal tries, the 53-yarder by Stout and two by Jake Pinegar (28 and 38).

One of the few negatives on the day came when tight end Pat Freiermuth took a shot to the head trying to catch a pass in the end zone. He got up after a couple of seconds and walked off but did not return to the game, and Franklin, as usual, would not give any injury update afterward.

Clifford showed some good candor in the media room after the game. He had one impressive play where he saw the pocket collapse, so he stepped forward, kept his head up and threw a 36-yard TD pass to Hamler.

It was a vintage Trace McSorley type of play, so obviously someone brought that up to the new QB after the game.

Is college football season worth it?

If college football somehow makes it to the field, all we’ll get is a shell of a season. Fewer games. ...

The Associated Press The Pac-12 set Sept. 26 as the start date Friday for its 10-game, conference-only football ...

Penn State is cutting salaries in its athletic department due to the effects of the coronavirus. The Centre Daily ...