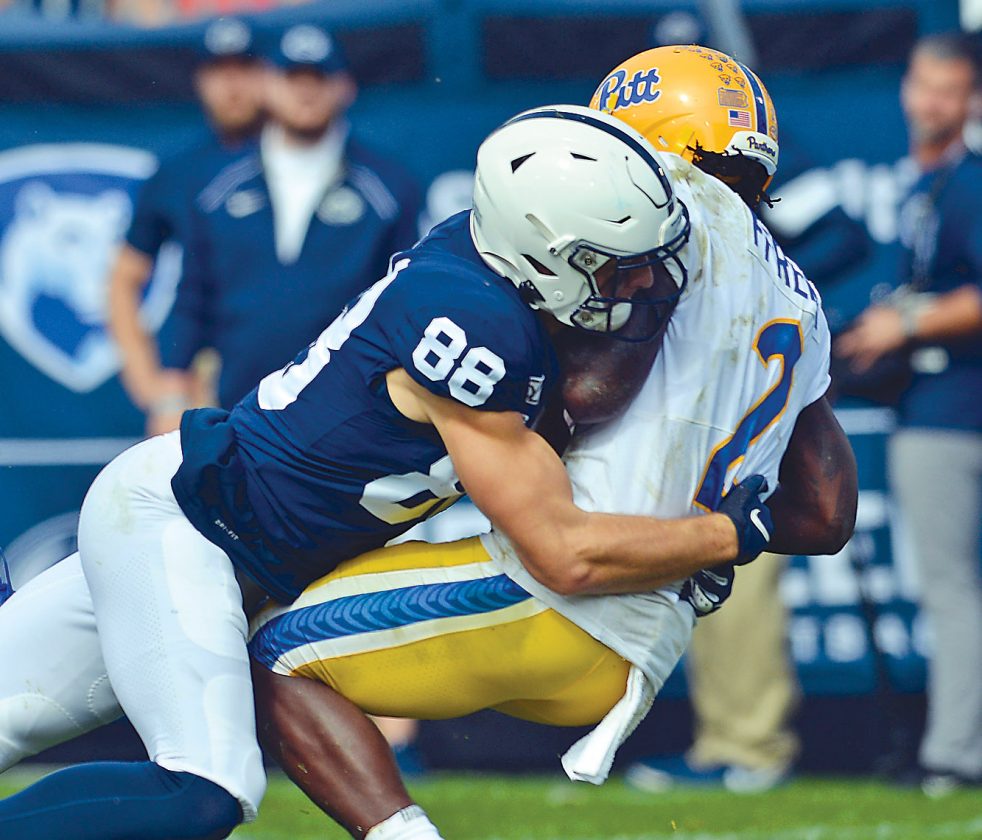 UNIVERSITY PARK — Following are the highlights and lowlights from Penn State’s 17-10 victory over Pitt on Saturday at Beaver Stadium:

Play of the game: On second-and-goal from the Penn State 1, with six minutes left and the Nittany Lions leading 17-10, Garrett Taylor stopped Pitt quarterback Kenny Pickett, who had a head of steam, for no gain.

Offensive player of the game: Pickett’s tenacity kept the Panthers in the game. He completed 35-of-51 for 372 yards, 17 passing first downs and no interceptions. He also ran nine times for a net gain of 7 yards.

Defensive player of the game: PSU linebacker Cam Brown made seven tackles, including 1.5 for loss, and broke up a pass. He was also credited with two quarterback hurries, including on third-and-goal from the PSU 1 in the fourth quarter.

Special teams player of the game: Penn State punter Blake Gillikin averaged 42.4 yards on seven punts with a long of 53. He placed four inside the 20.

Most telling statistic: The Lions’ defense limited Pitt to 24 yards rushing on 25 attempts.

Hidden statistic: Penn State’s average starting field position was its 16. Pitt’s was its 20.

Best pass: Pickett found Dontavius Butler-Jenkins up the left sideline for 27 yards late in the second quarter to the Lions’ 3, setting up Pitt’s first touchdown and a 10-7 lead.

Worst pass: Sean Clifford had KJ Hamler open over the middle in the third quarter for a big gain and missed him.

Catch it, will ya: Hamler and Journey Brown dropped passes in the first quarter. Garrett Taylor dropped a possible interception in the second quarter, and Jaquan Brisker missed one in the fourth quarter.

Hold it, won’t ya: Other than Clifford fumbling on a blindside hit, Penn State didn’t fumble.

Best kick: Penn State kicker Jordan Stout made a 57-yard field goal with :01 left in the first half to tie the game at 10. Stout’s FG is a new PSU record, breaking Chris Bahr’s 55 (he did it three times in 1975). Give Pitt punter Kirk Cristodoulou credit for a good day, including his 62-yarder early and four inside the PSU 20.

Worst kick: Down 17-10, Alex Kessman missed a 19-yard field goal, clanking it off the left upright, with 4:54 remaining.

Worst penalty: Lion gunner Dan Chisena was called for interference on Ffrench’s attempt to field a punt in the fourth quarter, costing the Lions 15 yards.

Best call: On third-and-8 from the PSU 15 late in the first half, Clifford hit Ricky Slade out of the backfield for 48 yards, setting up Stout’s long field goal.

Worst call: Pitt coach Pat Narduzzi, down 17-10 and facing fourth-and-goal at the Penn State 1, opted for a field goal attempt (which missed) with 4:54 left. Even if the field goal was made, the Panthers still needed a touchdown to win.

Best effort: With Pitt defensive end Deslin Alexander bearing down on him, Clifford endured a big hit and unleashed a 52-yard bomb to Chisena, who couldn’t quite reel in a leaping catch.

Unsung hero: Stout not only made the 57-yard field goal, but was 4-for-4 in touchbacks.