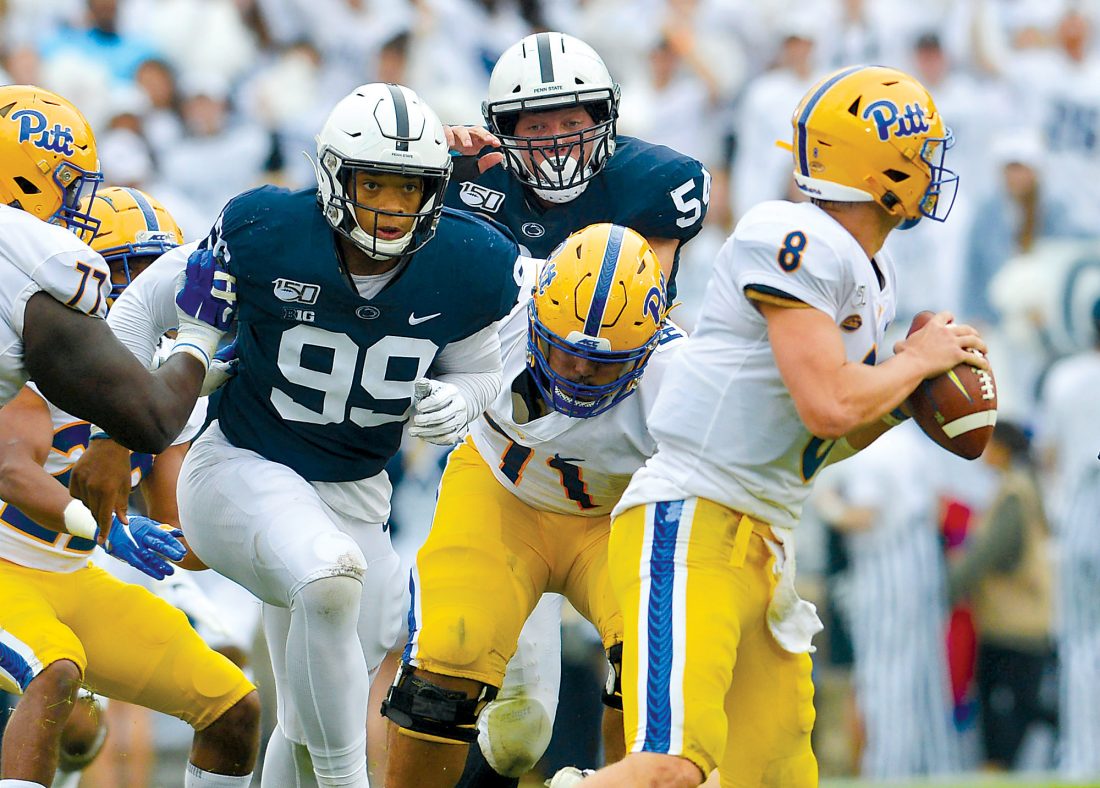 UNIVERSITY PARK — For all of his big talk, for all of his public lobbying about keeping the series going, for all of the needling he’s done toward Penn State about inconsequential things (such as last week’s beef over signals), Pitt coach Pat Narduzzi came up small in the biggest moment of Pennsylvania’s great college football rivalry Saturday afternoon.

With the series now over for what could be a long time, Narduzzi may not ever live down the baffling decision he made with the game on the line.

And the crazy thing is, he believes he made the right decision.

“I don’t question that call,” Narduzzi said after the game.

Penn State led by seven and made a brilliant goal-line stand for three plays with Pitt at the 1-yard line and five minutes to go. The Panthers still had another play to try and punch it in from the 1, but Narduzzi elected instead to try and kick a field goal, which missed.

The stunning decision was heavily ridiculed throughout the college football world Saturday after No. 13 Penn State held on for a 17-10 win over the Panthers before 108,661 fans at Beaver Stadium.

Even Penn State linebacker Micah Parsons felt Pitt should have tried for a tying touchdown on fourth-and-goal from the 1.

“Definitely,” Parsons said when asked if he was surprised by the decision to kick. “I think it’s always a great opportunity to take a chance. You have nothing to lose. If you don’t get it on the 1, we’re backed up.”

Parsons is right in saying Pitt really had nothing to lose going for it.

It was non-conference game. A rivalry game. The 100th meeting in the storied series. Since there are no more games scheduled for the foreseeable future, the winner would claim bragging rights over their in-state rival for many years.

Narduzzi, though, came up with a head-scratching answer for why he didn’t go for two.

“Because you need two scores to win the football game,” he said.

Right. But Pitt needed a touchdown to not lose the game, and that was a golden opportunity to get one right there.

It also was brought up to Narduzzi that he did not necessarily, in fact, need two scores because he could have gone for 2 had his team scored a touchdown.

When he heard that, Narduzzi replied, “Yeah,” then turned his head and mumbled something inaudible as he went to the next question.

He also shot back at the media questioning him, saying, “All the armchair quarterbacks, you guys all got those armchair desks, so it’s easy to make those decisions.”

Pitt got to the 1-yard line on a 29-yard pass from Kenny Pickett to Taysir Mack, who made a leaping grab and barely stayed inbounds on a second-and-19 play. The Panthers previously had converted a fourth-and-1 from their own 43 on the series, with Pickett surprising PSU’s defense by finding tight end Nakia Griffin-Stewart down the seam for 36 yards.

On first-and-goal at the 1, Pickett tried to throw but misfired. Pickett tried a keeper on second down but was stuffed for no gain.

Penn State linebacker Cam Brown blew up the third-down play as he got pressure on Pickett, who had an open receiver in the end zone but couldn’t get him the ball.

That brought up the fourth-and-goal at the 1 decision, which will live in infamy in the PSU-Pitt series.

“You run out of plays that you feel really good about,” Narduzzi said.

He also noted, “We thought we had three good ones.”

When those three plays didn’t work, the coach decided to kick the field goal. But Alex Kessman’s 19-yard attempt hit the left upright, meaning Pitt came away with nothing.

One other note on Narduzzi’s decision: He had only one timeout left, so giving the ball back to Penn State at the 20 with 4:54 left meant his offense wouldn’t have much time left to score a touchdown if it did get the ball back.

“That touchdown or any points would have really changed the game,” Parsons said. “I just feel like the guys on the field (on defense) really did a great job standing up. That’s just something that we preach every day in practice — sudden change and really making stops (when) our backs are against the wall.”

It turned out, Penn State couldn’t run out the clock and did give the ball back to Pitt. The Lions got one first down, but Sean Clifford misfired on a third-and-4 pass from his own 45, so PSU punted and Pitt took over at its 16 with 1:56 remaining.

The Panthers hit some pass plays to give themselves a chance to score, including converting a fourth-and-12 from their own 35 when Pickett connected with Mack for 28 yards to the PSU 37.

There were only 26 seconds left at that point, however, and Pitt was out of timeouts. The Panthers got another first down through the air to the PSU 26 with nine seconds to go.

Pitt missed a short pass, but still had a chance on a Hail Mary. Pickett’s pass carried toward a big group of players from both sides in the back of the end zone, it hit off some hands and bounced in the air, only to fall to the ground to end the game.

“You can’t say that (fourth-and-goal play) ended the game at all,” Brown said. “Because a team like that, the catches they’re making, they’ve got players on their team. … So we had to be ready, because God knows what happens. On that last play it could have went the whole other way and the game wouldn’t have been over.”

The game was tied 10-10 at the half, thanks to Jordan Stout setting a PSU record by kicking a 57-yard field goal with one second left. The Lions took the lead, 17-10, and scored what wound up being the final points of the game on a 13-yard run by Noah Cain with 5:50 left in the third quarter.

Journey Brown had an 85-yard run for PSU and finished with 109 yards on 10 carries. Clifford completed 14-of-30 passes for 222 yards but misfired numerous times trying to hit big plays downfield.

Pickett threw the ball an astounding 51 times for Pitt, completing 35 for 372 yards. The Panthers were one dimensional, though, as PSU held them to just 24 yards rushing.

“That was a great win,” Clifford said. “It was just a great team win. I couldn’t be more proud of our team right now.”