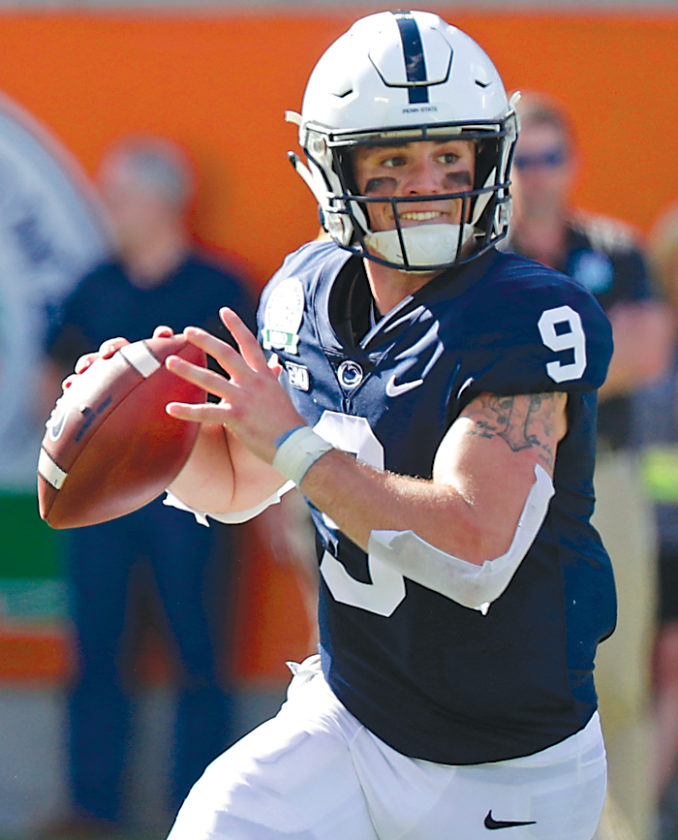 ORLANDO, Fla. — Trace McSorley’s career ended like it began — in a Florida bowl game, against an SEC opponent, attempting to rally the Nittany Lions from a three-score deficit.

In the end, as Penn State lost to Georgia 24-17 three years ago in the TaxSlayer Bowl, the Lions could not overcome a 27-7 hole and lost to Kentucky on a glorious New Year’s Day in the Citrus Bowl, 27-24.

But neither defeat could be pinned on McSorley, the toughest competitor in Penn State history whose three-year tenure at quarterback will long set a standard of excellence.

Tuesday was just the latest example.

After being poked in the eye in the second quarter and being ruled out of the game in the third quarter due to what Penn State called a broken foot, McSorley returned and gamely attempted to engineer yet another comeback.

He pulled the Lions within a field goal before the defense, which played well enough to win, finally broke and couldn’t give McSorley the ball back for a final, potential game-winning drive.

“Today was a really good example of the type of leader, player and person he is,” James Franklin said of McSorley. “You focus on his arm and his legs, but it’s his heart and his mind that really make him special.”

Franklin said the diagnosis wasn’t official, and it was left up to team doctors and then McSorley to determine whether he could continue.

“It always starts and ends with the doctors, and then it’s a conversation with Trace,” Franklin said. “At first, we weren’t sure. I wasn’t going to put him back in. Then some time went by, and he felt confident. Obviously, you saw how he was able to play.”

While trying to get loose in the third quarter, McSorley spoke with his family and said “it was just pain tolerance,” which he estimated to be “seven or eight” on a scale to 10.

As he got loose, the pain became manageable.

Sean Clifford spelled McSorley for one play in the second quarter — he threw a gorgeous bomb to DeAndre Thompkins, who dropped it — and a series in the third.

Down 27-7, McSorley quickly directed two touchdown drives to pull PSU within 27-21 and moved the Lions to the Kentucky 14 before Franklin elected to take a field goal to make to 27-24 with 4:12 remaining.

Twitter, of course, blew up for not going for the fourth-and-7, but that’s not why the game was lost.

Three more drops brought the season total to 37 — an average of three per game — while the special teams botched a fake punt, missed two field goals and allowed a punt return for a touchdown.

Franklin said both areas will be addressed after the season, which may mean some tweaks of the coaching staff.

“The same thing that troubled us throughout the season troubled us today — dropped balls, missed opportunities on special teams,” Franklin said. “We haven’t done it. We’ll evaluate it and ask tough questions to ourselves, and we’ll look at everything.”

Equally troubling was the fact that Penn State did not match Kentucky’s intensity, either at the start of the game or after halftime as the Wildcats turned a 10-7 halftime lead into a 27-7 edge heading into the fourth quarter.

“Kentucky had a really good season so they were pretty motivated to finish the season strong,” running back Miles Sanders said. “They came out and played harder than us. We put ourselves in a hole and ran out of time.”

McSorley wasn’t sharp early, missing open receivers, but just as he’s done throughout his PSU career, he was at his best when the team needed him most.

“He’s such a tough guy and really boosted our hopes,” tight end Nick Bowers said. “He comes back time after time. We can’t thank him enough.”

And now he’s gone. McSorley heads to the Senior Bowl in hopes to interest an NFL team.

After having the pleasure of watching him the last three years, there’s no reason to doubt Trace McSorley, who leaves Penn State with his legacy firmly cemented and one giant pair of shoes to fill.