Nittany Lions easing back into workouts 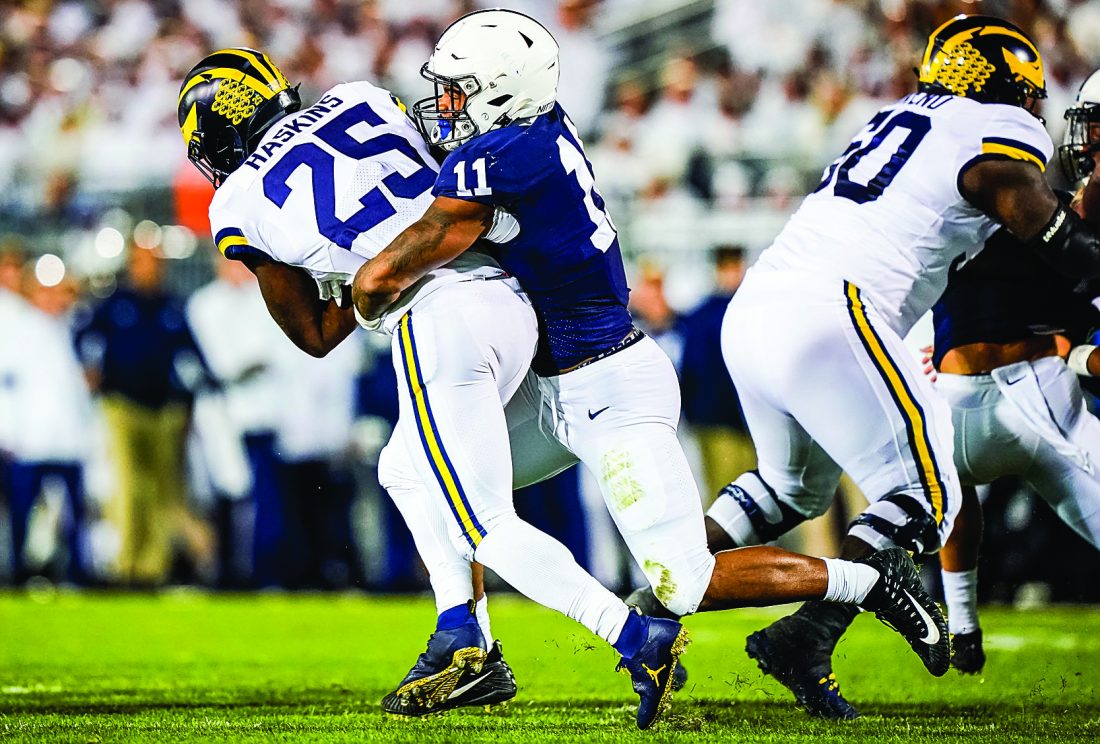 Mirror file photo Penn State linebacker Miicah Parsons is waiting until after this weekend to return to University Park.

Penn State football players have been cleared by the university for voluntary workouts, and the key word is voluntary.

Two of the team’s top players, linebacker Micah Parsons and tailback Noah Cain, were made available to the media via Zoom the last two days.

Parsons is not yet back on campus, saying he’s waiting until after this weekend to spend Father’s Day in Harrisburg with his son and his father, and Cain admitted he had reservations about returning.

Cain’s mother tested positive for the coronavirus, along with his aunt and cousin, and he said, “It was a difficult decision for me to come back, especially coming (from Dallas) on a plane.”

But his parents encouraged him to do so, and he’s actually been in State College for a week, though he’s yet to participate in a workout.

“My family thought being in State College would be safer,” he said.

Following quarantine, the players are tested (Cain said Tuesday he’s awaiting results), and instructed to maintain social distancing, both at meals and in the weight room.

“Cover your face, don’t give anybody a hug,” he said. “Keep your distance and get your work in.”

He had enough exposure to the virus to be a believer in its severity.

“It’s definitely a serious thing,” he said. “All of my loved ones are better now, but it was a difficult time.”

He’s confident that Penn State’s medical staff “will do a great job” should a player contract the virus but also knows “it’s so easy to get it.”

The Nittany Lions’ second-leading rusher as a true freshman in 2019 (443 yards, 5.7 average), Cain said there’s reservations about playing – “it’s in the back of my mind” – but he’s eager to get back on the field.

“It’s a big step for everybody to be back amongst each other,” he said.

After consecutive 100-yard games against Purdue and Iowa at midseason, Cain turned an ankle and was used sparingly in the second half of the season before rushing for 92 yards in the Cotton Bowl win over Memphis.

During that time, Journey Brown (890 yards, including 202 in the Cotton Bowl) emerged as the Lions’ feature back and ended the season, Cain felt, “playing like the best back in the country.”

Cain said his injury taught him patience and “you can’t rush back. My mind was ready, but my body wasn’t.”

He’s now 223 pounds – 15 pounds heavier than when he reported in January of 2019 – and feels “more explosive and leaner than I’ve ever been.”

While Cain will be attempting to crack the starting lineup, Parsons is being looked upon as the leader of the defense.

The incoming junior has already been projected as a Top-10 draft pick and knows all eyes are on him.

“It’s always a challenge when you’re stepping into a bigger role,” he said. “I went from the guy who never said anything (as true freshman) to a guy who speaks up more. It’s a challenge I have to be willing to accept and something I’m excited about.”

In particular, he liked the way Johnson “carried himself every day,” adding “his approach to the game, his study, helping me understand is off the charts.”

Neither player knows how the season will take shape, and if and how many fans will be permitted at Beaver Stadium.

“Hearing we’re coming back is a relief,” Parsons said. “You want to play in front of the fans. I hope things can go back to normal. Hopefully the end of the season comes, and Beaver Stadium will be full.”

Cain said playing in front of a socially-distanced crowd in a half-full stadium, or less, would be “crazy and a big adjustment – almost like a scrimmage.”

But he also feels, “As long as we get to play a season, ball is ball.”