Two Nittany Lions picked in round 2 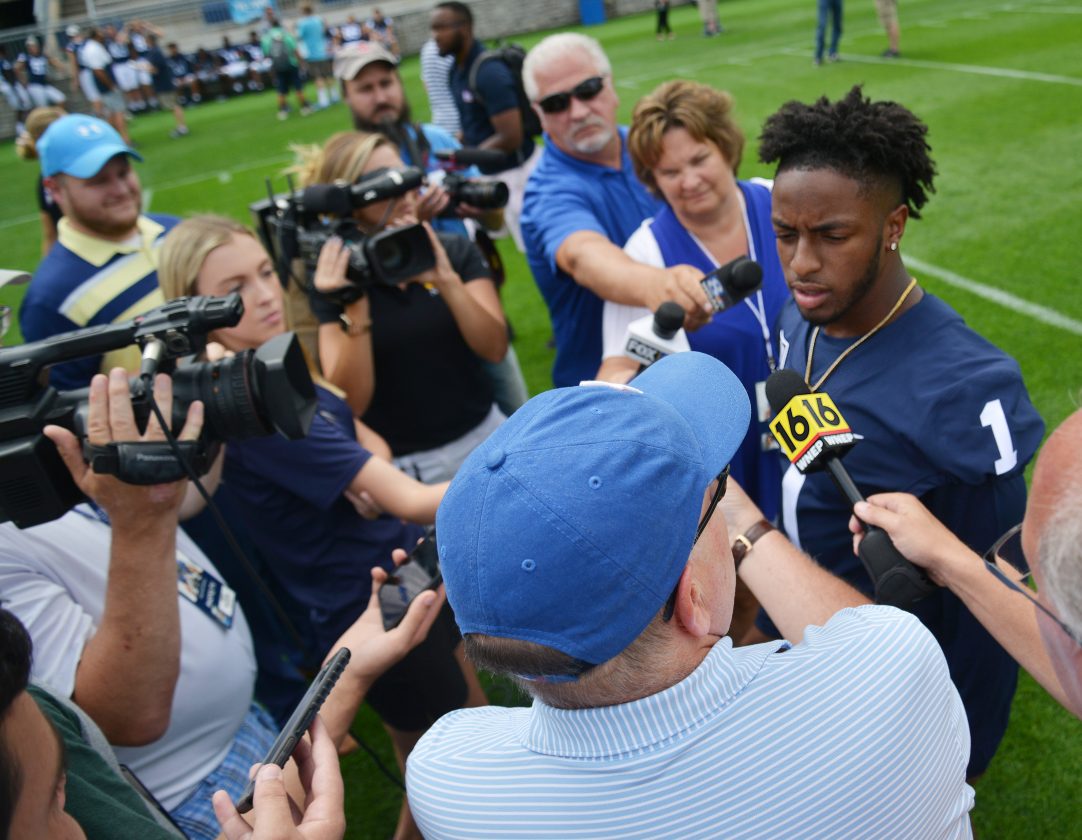 Penn State's KJ Hamler was picked by the Denver Broncos in the second round. Mirror file photo

CHARLOTTE, N.C. — The Carolina Panthers continued to address their defensive needs on day two of the NFL draft, selecting Yetur Gross-Matos from Penn State with the sixth pick in the second round Friday night.

“We have to be able to affect the quarterbacks that we’re going to face,” Panthers coach Matt Rhule said.

He was a first-team all-conference selection as a junior after pacing the Penn State defense with 40 tackles and 91⁄2 sacks. The defensive end is expected to compete for a starting job with last year’s first-round draft pick Brian Burns and new free agent pickup Stephen Weatherly from the Vikings.

“We are always looking for pass rushers and he is guy who can get on the edge and turn the corner,” Rhule said. “He can also play inside and rush the quarterback.”

Panthers general manager Marty Hurney said his team’s focus needed to be on upgrading the defense entering the draft after addressing mostly offensive needs in free agency. Carolina is looking to replace nine starters from last year’s defense that allowed 29.4 points per game, second-most in the league.

Carolina previously selected Auburn defensive tackle Derrick Brown with the No. 7 overall pick in the first round Thursday night.

“Coming in if you had told us we could have gotten these guys we would have been really ecstatic,” Hurney said.

The 6-foot-5, 326-pound Brown figures to play a big role in Carolina’s defense and will help free up players like Gross-Matos to make plays.

“You don’t find guys that big that can run that fast,” said Rhule.

Gross-Matos’ childhood was marred by family tragedies that he said have shaped who he became as a person.

When he was 2 years old, he fell off the side of a boat during a family outing. His father, Michael Gross, saved Yetur but drowned in the process. He was 29. Nine years later, Gross-Matos’ brother, Chelal, died after he was struck by lightning while the the brothers were playing outside.

“It put the rest of my life in perspective,” Gross-Matos said on a video conference call. “It’s about taking advantage of opportunities every second, every day. Give your best and love the people around you. Me and my family are a very close group. … I’m just happy to be in this moment with these people and I can’t wait to celebrate with them.”

In Denver, John Elway stuck with the deep pool of wide receivers in the second round of the NFL draft Friday night, selecting Penn State speedster K.J. Hamler with the 46th pick.

Elway has gone all-in on second-year quarterback Drew Lock by giving him two terrific targets after the first two rounds of the draft. He chose Alabama wide receiver Jerry Jeudy a day earlier with the 15th overall selection.

Hamler, who is generously listed at 5-foot-9 and 185 pounds, is elusive with an uncommon burst of speed. He modeled his game after DeSean Jackson and Steve Smith, but the Broncos see him as a Tyreek Hill-type playmaker who can also serve as Denver’s kick returner and help the Broncos chase down Hill and the Super Bowl champion Chiefs in the AFC West.

“I’m a dog,” Hamler said at the NFL scouting combine. “That’s just point blank, period. You don’t find a lot of people my size, doing some things that I do. Me personally, my playmaking ability, my dog mentality just stands out.”

On Friday night, Hamler said he was surprised when Elway called, but he said he was eager to team up with Jeudy, Courtland Sutton and former college teammate DaeSean Hamilton in Denver.

“I’ve been an underdog my whole life. I’ve always had something to prove just because of my size,” Hamler said. “I had to develop in other areas to help out. So, my dog mentality, I do that on and off the field. I don’t take nothing from nobody. I don’t back down from nobody. It’s like a David and Goliath story. I’m the smallest guy with the smallest frame, but I’ll give you everything I’ve got.”