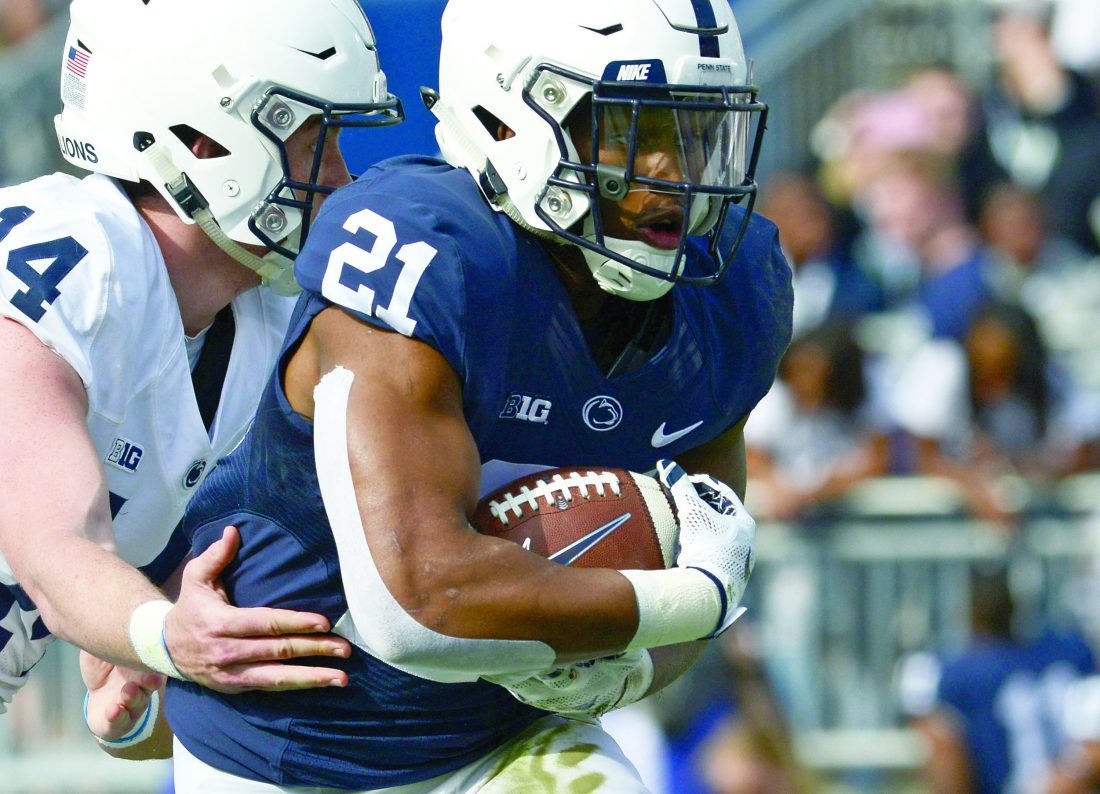 Penn State has a new offensive coordinator in Kirk Ciarrocca, so missing spring practice because of the coronavirus certainly could present some challenges for the team this fall.

Then again, Ciarrocca was able to make a lot of inroads with the offensive players and schemes following the Cotton Bowl and throughout the winter before everyone was sent home a few weeks ago.

There’s a lot of optimism, therefore, that the Nittany Lions’ offense won’t miss a beat even with the coaching changeover.

“Kirk has been awesome,” tight ends coach and co-offensive coordinator Tyler Bowen said. “I’ve enjoyed learning from him since he’s been here. … This isn’t something that we’ve had to piece together. It’s been a very clear, concise plan since day one.

“The beauty of Kirk coming in, he’s a guy who’s done it at a high level for a very long time,” Bowen added. “Everywhere he’s been, he’s been able to build a program up on offense that maybe was a bottom dweller and they ended up toward the top.”

Bowen spoke to reporters on a video conference Wednesday morning and explained why he has so much faith in Ciarrocca, who came from Minnesota to replace Ricky Rahne, now the head coach at Old Dominion.

“You listen to him talk, he can go up and be a guy that coaches an offensive lineman on his first two steps and then go talk about the receiver split and what release he should take against inside leverage press coverage. He’s got that wealth of knowledge with his experience. That’s helped him really acclimate to our players well because he’s hands on and coaching them throughout putting in this system.”

The bottom line for Bowen is that Ciarrocca has “such a clear vision of what this Penn State offense is going to be.”

We’ll have to wait until the season to find out exactly what that will be, but Penn State fans clearly saw what Ciarrocca was capable of doing when he oversaw a dynamic Minnesota offense that beat the Lions last season, 31-26.

Joe Moorhead installed the modern PSU offense in 2016, and Rahne carried that over the past two seasons, albeit with less explosiveness and more inconsistency.

James Franklin had some insight into what the Penn State offense will and will not be under Ciarrocca.

“The interesting thing is we could give our playbook right now to Minnesota, and it does not look like Minnesota’s playbook,” the coach said last week. “And there’s things that don’t look like Penn State’s playbook, because really we have kind of merged it all. So there’s probably only one new scheme that we haven’t done before. There’s some tweaks to things that we have done.

The final result, then, will be a blend of the two systems.

Still, blending systems can take time, and not having spring practice means the Lions missed out on important practice time. The coaches are working on things with the players through video chats, but that can only go so far.

“The one thing you’re going to lose that can’t be made up is watching a guy make a mistake full speed from the meeting room and then being able to correct it,” Bowen said. “I don’t know what the answer for that is.”

How much will missing spring drills hurt the offense?