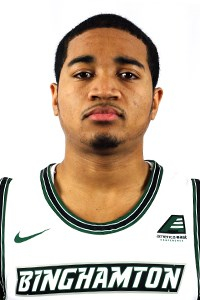 A high-scoring guard, Sessoms, from Philadelphia, is transferring after two seasons at Division I Binghamton. He has signed his grant-in-aid to enroll at Penn State. He will have two years of eligibility remaining.

“Sam is proven scorer on the college level as well as an elite playmaker,” Chambers said. “He is a tough Philly guard, and his experiences over the last two years will be invaluable to our program.”

The 2019-20 America East Conference scoring champion averaged 19.4 points per game and was second in the league with 4.8 assists per game as a sophomore. Sessoms currently ranks ninth in NCAA active career leaders with an average of 18.6 points per game. He also led the Bearcats in assists and steals each of the last two seasons.

He etched his name in the Bearcat record books with marks for single-game scoring, field goals, 30-plus point scoring games, and 28 career games with 20 or more points. He reached the 1,000-career point scoring mark in only 57 games, fastest in Binghamton program history.

A two-time all-America East honoree, Sessoms was tabbed the America East Rookie of the Year as a freshman. He averaged 17.8 ppg, fifth among the nation’s freshmen, with 13 games of 20 or points or more while shooting 44.8 percent from the field.

The two-time all-state selection and first-team honoree led The Shipley School to the league championship game in back-to-back seasons and 68 victories during his career. Sessoms garnered numerous accolades including recognition on the all-league and all-Mainline team four times.

Sessoms owns the school record for points scored with 2,091 and was one of the top scorers in Philadelphia with a 28.8 points-per-game average as a senior and 23 ppg as a junior. The three-time MVP for the Gators, he was also a McDonald’s All-American game nominee.

He joins a class for the 2020-21 season that includes Dallion Johnson (6-foot-2), D.J. Gordon (6-foot-5), Valdir Manuel (6-foot-10) and Caleb Dorsey (6-foot-7). Johnson is from Massachusetts while the other three players are from Pennsylvania.