Stevens can only imagine what-ifs of March 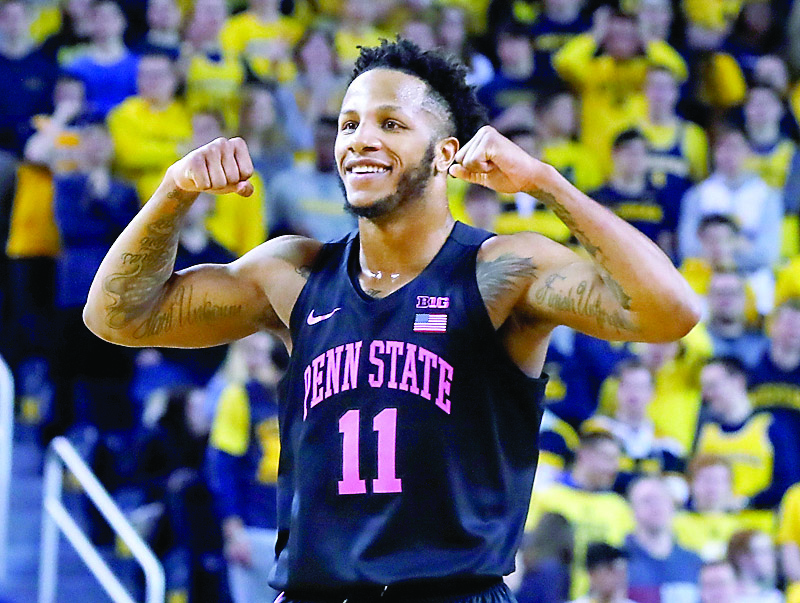 In this Jan. 22, 2020, file photo, Penn State forward Lamar Stevens reacts to a basket against Michigan in the first half of an NCAA college basketball game in Ann Arbor, Mich.

One of the greatest players in Penn State basketball history was all set to break the school’s career scoring record and to lead the Nittany Lions to a rare NCAA Tournament appearance.

Then, in a cruel twist of fate, all of that was taken away from Lamar Stevens.

“My initial thought after this is I was really hurt,” Stevens said in a candid interview with college basketball reporter Jeff Goodman of WatchStadium.com.

“Just being a senior, being a guy who hasn’t made the tournament in the previous three years and knowing it was coming to reality this year and not having any control over it, being seven points away from being the school’s all-time leading scorer, my heart broke, honestly.”

Penn State was denied its first appearance in the NCAA Tournament since 2011 when the coronavirus pandemic caused the tournament to be canceled. When that happened, Stevens became one of the most prominent players in the country, as his tale was told on numerous national programs, with one college basketball expert after another expressing their disappointment for him.

Stevens bypassed the pros and returned to PSU for his senior year, then did what he set out to accomplish by leading the Lions to an NCAA Tournament bid. The team was a lock to go dancing, even though the field was never formally announced because of the tournament cancelation.

Stevens addressed his feelings about the tournament being canceled during his interview with Goodman.

“The first time I saw (the news) was on the bus on the way back to the gym after getting off the plane from the Big Ten Tournament,” Stevens said.

“At first I was in shock. We had a meeting in the locker room right after, and I couldn’t help but hold back tears. Everybody in there was just crying, so emotional, hugging each other. We just weren’t ready for the end.”

The team, Stevens said, had “so many more goals to attain.”

“But we have no shot of doing it,” he added.

He understands why the decision was made to cancel the tournament.

“The coronavirus is a serious deal, and I know a lot of people have been affected by it,” Stevens said.

“But it still hurts for us players.”

Stevens gave his idea on what he would have liked to see happen with the NCAA Tournament.

“I think they should have postponed it or had a poll that goes out to all the players and coaches to see if guys are willing to miss graduation in May or in June and give us the opportunity to have some say, if we want to play at a later date,” Stevens said. “I know that I wanted to.

“It’s not fair for the seniors, especially for somebody who may be in my position who’s never been, and they finally made it. I think that would have been more beneficial, more a collective answer.”

Where does Stevens rank among the all-time Penn State greats? His point total is second to Battle’s, and he’s in the top 10 of most major statistical categories for the Lions.

The Mirror conducted a survey Friday with several reporters who have covered the Penn State program for a number of years and are familiar with its history. There was only one question: rank the top three PSU players of all time.

The reporters’ votes are included alongside this story. Those who voted for Stevens pointed out his versatility and that he had to do so much for the team.

“I feel like I gave everything to this program, this school, to get to that point,” Stevens said of going to the NCAA Tournament, “and I wanted that experience with my team and my coaches and just have that Penn State community be able to rally around us while we finally made the tournament, something we haven’t done in nine years.

“That was something I really had a lot of excitement for, something I was really proud of. And just to see it end in this way, it definitely hurts.”