Another tuneup: Lions looking for another blowout win 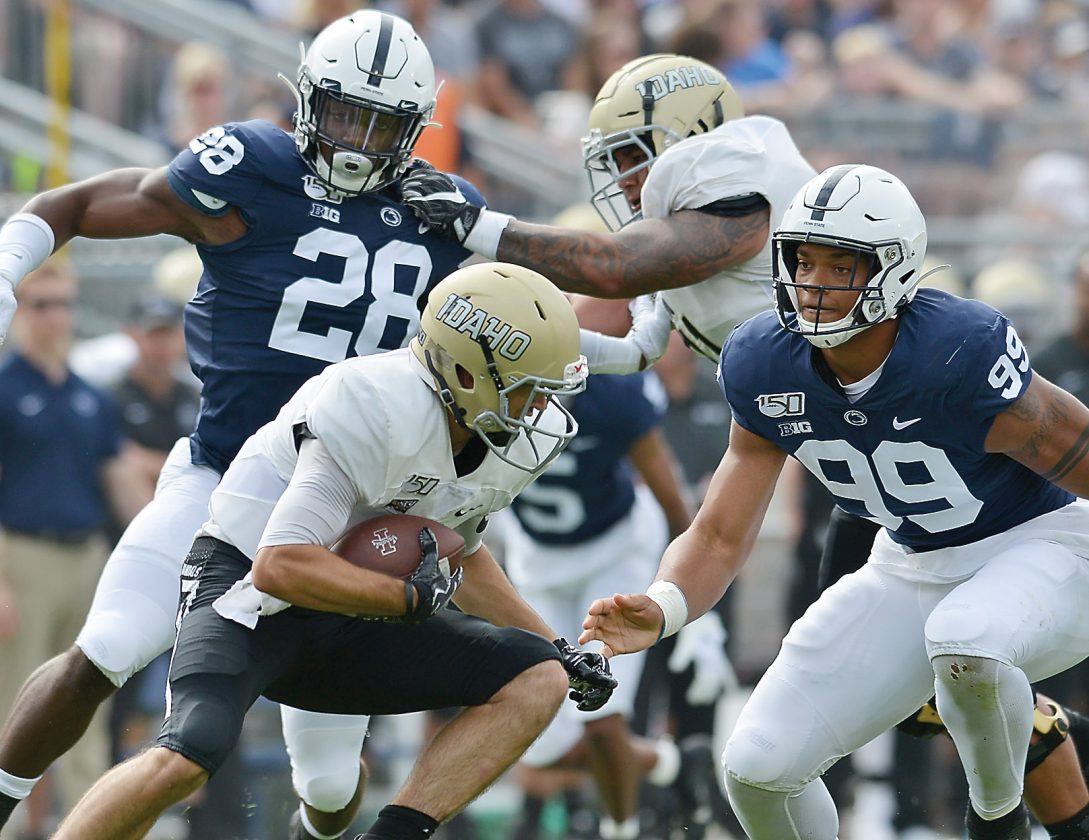 The Associated Press Jayson Oweh (28) and Yetur Gross-Matos close in on Idaho’s quarterback during last week’s 79-7 rout by the Nittany Lions.

Five things to look for as Penn State hosts Buffalo in a night game looking for another blowout non-conference victory.

Buffalo does not have a strong offense and has a new starting quarterback, so Penn State’s defense should be in control of the game.

The Bulls won their opener over Robert Morris, 38-10, but threw only 10 passes. Freshman Matt Myers completed five of those for 69 yards, but he could be in for a world of problems against this outstanding PSU defense.

Buffalo did have 285 yards rushing last week, so they’ll look to establish ground game. But without a strong passing presence, Lions know they can key on Bulls’ running attack. That’s usually bad news for opponents.

This game gives Sean Clifford another opportunity to get experience and build confidence. The Lions probably can win this game easily staying primarily on the ground, but they might as well give the new starting QB every opportunity possible to throw the ball and build a strong rapport with the receivers.

Clifford was clearly nervous and it showed the first couple series of last week’s opener. But he settled down nicely after that and played well, completing 14-of-23 for 280 yards and two TDs.

Clifford showed good footwork on some plays and a knack for understanding when the pocket was collapsing. Granted, it was against an awful opponent, but they were important game reps for the redshirt sophomore.

We just can’t read too much into what happened last week in any area, but Penn State’s offensive line had a solid day all around in run and pass blocking.

Buffalo’s defense will provide a little bit more of a challenge, but the Lions should be able to control the trenches. Every game rep is important when an O-line has new faces and question marks, and we’ll have a little better feel after this one about PSU’s guys up front.

It’s been pointed out several times this week how successful Buffalo coach Lance Leipold has been in his career. He won six national titles in eight years and was an astounding 109-6 at Division III Wisconsin-Whitewater.

I’m looking forward to seeing what he can do as a coach. His team doesn’t have a prayer in this as a 29 1/2-point underdog, but you can still get a feel for what a coach is like through the decisions and adjustments he’s able to make as a game goes on.

SUBHD: No. 5: Players to watch

PSU: The defensive line should have a big game, stuffing the run and getting to the quarterback. The Lions have a chance to be fantastic up front, and we should see more signs of that today.

Buffalo: QB Matt Myers must be able to throw the ball with some degree of effectiveness, or else Buffalo’s offense won’t do anything.

UNIVERSITY PARK — Most coaches won’t admit publicly that one contest is a must-win game, even when it’s ...