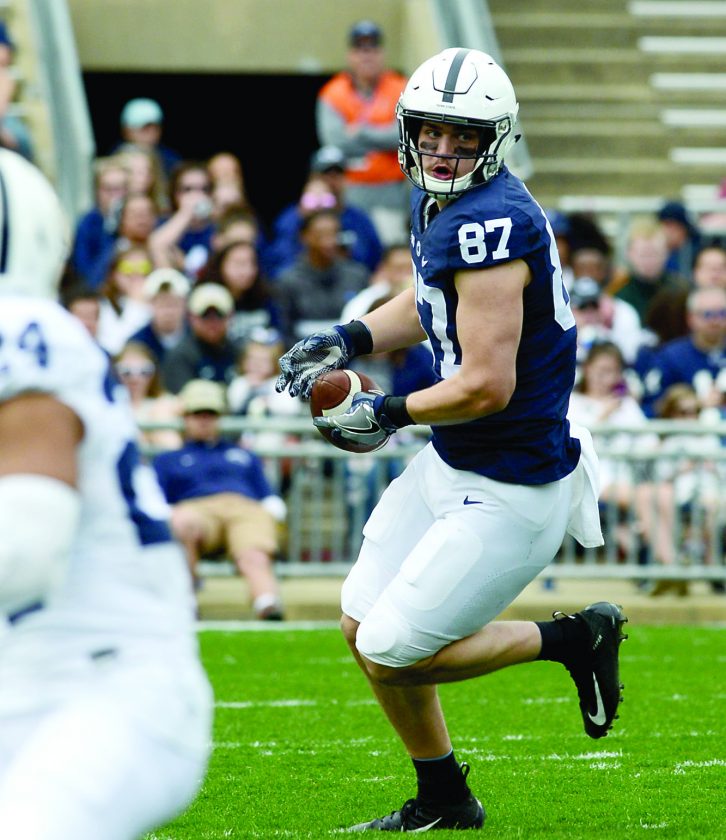 UNIVERSITY PARK — Imagine going into your office, whatever kind of job you do, and being asked to publicly rank all of the employees there — including yourself — from No. 1 to No. 10 or whatever, based on what you see from everyone’s job performance.

There would be a lot at stake in these rankings, too, such as raises, promotions, etc. But most importantly, your rankings also need to be accurate, so that your entire company succeeds in a tough business environment, not just you succeeding individually.

It’s a fascinating concept in a lot of ways, one that would solve some problems in a workplace but also potentially create other problems, as well.

The Penn State football team apparently has been using this concept in recent years as part of a process to help players better understand their place on the depth chart.

Players are asked to rank everyone in their position group, from the top guy to the bottom, and to do so in front of the other guys so that it can lead to open and frank discussion from peers about strengths and weaknesses.

Even though this practice has been in place for a while, coach James Franklin brought it up for the first time Tuesday during his opening-week press conference, and it created a good bit of intrigue. He said it started a few years back with cornerbacks coach Terry Smith using it with his group.

“Terry did this, and I found out and me and Terry got into a big discussion about it,” Franklin said. “It was something I thought was really valuable for the team, as well. We have magnets in there, so it’s the coaches’ ranking and it’s the players’ rankings, and we do the players first.

Franklin said the process can lead to a “really good discussion” and offers “great information for the players” about how they are viewed by their peers.

Sometimes when you’re a backup on a team, there can be hard feelings or thoughts of why you’re not playing in front of another guy. The purpose of the PSU player-ranking system is to have the players learn to evaluate everyone else at their position and to be honest with themselves about how they stack up.

“I definitely think it’s really good just because you don’t really get the bickering of, ‘Why am I not playing?’ and things like that,” cornerback John Reid said. “Because when your friends are telling you the reality, you take it as I need to improve.”

Reid said the cornerbacks have been doing the rankings since his freshman year and noted, “The ranking in the room by the players is usually the depth chart. I don’t think it’s really ever been wrong.”

Now, in a workplace, the sort of honesty from a ranking system could lead to hard feelings among co-workers and create a toxic environment.

But in team sports, where everyone is supposed to be pulling for what’s best for the whole team over what’s best for any individual, the concept can have value. If, that is, all the players buy into such a concept.

“I think in general you want to be around people who are just going to be real with you and be honest, and that’s what you’re getting,” Reid said.

“You’ve got to check your sensitivity at the door, and that’s what Coach Smith always says. You can’t be sensitive, you’ve just got to look at it like you do anything — a challenge.”

Speaking of the depth chart, Penn State released its opening-week one Tuesday, and it included few surprises.

The most notable element was that four running backs are listed as possible starters, with the depth chart reading Ricky Slade or Journey Brown or Noah Cain or Devyn Ford.

Franklin did say Slade has earned the right to start the opener based on his experience, but noted the other backs all could rotate throughout the season.

“The running back room saw the running backs the same way we did (in their player rankings), that all four should play, but that Ricky Slade would be the starter,” Franklin said.

“We plan on playing all four, and then obviously either by game or as the season goes on, play whoever we think is hot,” the coach added. “It could be based on matchups, because we’ve got different styles. Obviously Noah Cain has got a very different style than Ricky, and there’s some games where that may make sense, or there’s some situation where that may make sense — four-minute or whatever it may be.”

The only other “or” spot is for third-string quarterback, between freshmen Ta’Quan Roberson and Michael Johnson Jr.

Franklin commented for the first time on why Sean Clifford was named the starting quarterback over Will Levis, news that broke Friday afternoon on social media.

“It really comes down to a lot of things,” the coach said. “I think, obviously, consistency. For us, very similar to when we named Trace (McSorley) the starting quarterback (in 2016), the experience factored in. You’ve got an older guy who played in games, and really had competed like crazy and done everything that he needed to do from the time the season ended.

“But Will did, as well. Will is very, very talented and has got a very, very bright future. But I think when it’s close like that, you’re always going to go with the older, more experienced player, and that’s really what Sean is and has done a great job. Both of those guys have earned all the coaches’ respect.”

Hollidaysburg product Vlad Hilling, a redshirt freshman, was not listed on the three-person depth chart at place-kicker. Transfer Jordan Stout won the backup job behind Jake Pinegar, and Rafael Checa is third string.

Note: See the Lions’ entire depth chart in the PSU section at altoonamirror.com.