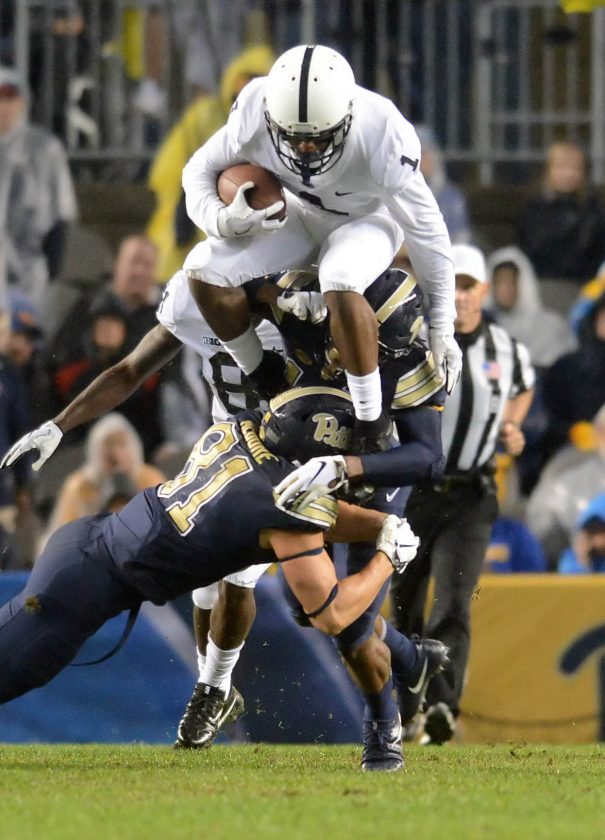 So is the projected starting running back (Ricky Slade).

The All-America caliber linebacker is a sophomore, as well (Micah Parsons).

Perhaps the best wide receiver will turn out to be a freshman (Justin Shorter).

All over the field, the Nittany Lions will be counting on young but very talented underclassmen at marquee positions this season. The team has 87 players with either freshman (50) or sophomore (37) eligibility, compared to just 28 upperclassmen (10 seniors, 18 juniors).

There’s a whole lot of potential among this group of young players, and collectively they should get better and better as they gain more experience throughout the season.

“The positive is you’ve got a bunch of guys that are hungry and are excited and that have something to really prove and got a chip on their shoulder,” coach James Franklin said when asked the pros of having a young squad.

Experience is enormous, and not just game experience. The experience of just being a college football player. Learning how everything works. Seeing the massive differences between this level and high school. Figuring out how to prepare the body and mind every day to compete.

These things go on behind the scenes every day for young college athletes, and they are vital to the developmental process.

On a couple of occasions in recent weeks, Franklin has told an interesting story of how he’s been talking to the young players about how much they’ve improved.

“I go around the room, Micah Parsons, how much better are you right now than you were at this time last year?” Franklin said. “Jahan Dotson, he was telling me in the weight room the other day he went back and watched his first couple weeks of practice, and it was embarrassing watching himself on film, and here is a guy what played for us as a true freshman.

“I could go on and on naming guys, how much better they are, and we relied on a bunch of inexperienced guys (last year).”

It’s not just getting better as football players, either.

A big, big part of the college experience is getting your body ready to play at this level.

For just about every one of PSU’s top players, they were simply bigger and faster and stronger than the competition in high school, so they could dominate.

For a player to succeed in major college football, he must take advantage of everything a big program such as Penn State has to offer when it comes to daily training, diet and nutrition and all the scientific stuff that goes on medically to help make the body the very best it can be.

“If you look at me coming in freshman year, it’s a lot different than me coming in now,” Clifford, a redshirt sophomore, said during the spring. “I’ve put on weight, but I’ve also lost a lot of fat. So that’s a testament to our strength staff.”

Penn State does extensive tracking of everything, from body fat to speed training to workout loads, all in an effort to try and turn very good football players and athletes into superstar players and elite physical machines.

It’s incredible sometimes seeing what a player looks like as a freshman compared to just one year later as a sophomore, and then beyond in his career.

If you want proof of that, google Kevin Givens and check out an image of him when he was at Altoona Area High School. The skinny kid in that picture hardly looks like the same human being that Givens developed into as he gained upwards of 60 pounds at Penn State and became one of the program’s strongest players.

Parsons came to Penn State as one of the top recruits in the country and has a chance to be a special player. He wound up playing a lot as a true freshman last year and led the team in tackles, but he wasn’t sure what to expect when he got to college.

“You don’t really know what it takes,” Parsons said when asked about living up to potential. “People can guide you in the right direction. … When you’re coming out of high school, you never know what to expect.”

Especially when it comes to the speed of the game. Just about every college player says that is one of the biggest adjustments.

Shorter only played four games last season and was able to redshirt, but those four contests were enough for him to see what the college game is all about.

“Definitely getting those four games in helped me so much, just to see the speed of the game,” Shorter said. “From high school to college it’s so different, the speed, and everyone’s fast, everyone’s big, everyone’s strong.”

All eyes will be on Clifford this season to see how the redshirt sophomore handles being the starting quarterback and the enormous responsibilities that come with that.

Clifford has all the physical tools and is highly respected as a leader, but he’s never been “the guy” going into a contest that defenses game plan for trying to stop everything he does.

Like so many other young players on the Lions, Clifford is about to enter a different universe when it comes to expectations versus reality. As the quarterback, he is the most important player on the team, and he undoubtedly will experience some mistakes and growing pains.

Understanding how to overcome those things — plus the fan and media criticism that comes with it — is also a big part of the learning curve for any young player.

Clifford said he will try to “shield myself as much as possible from (the outside noise)” that all starting quarterbacks have to deal with.

“I do my best to just focus on what I need to focus on,” he added.

Penn State named eight players as team captains on Saturday. They are: