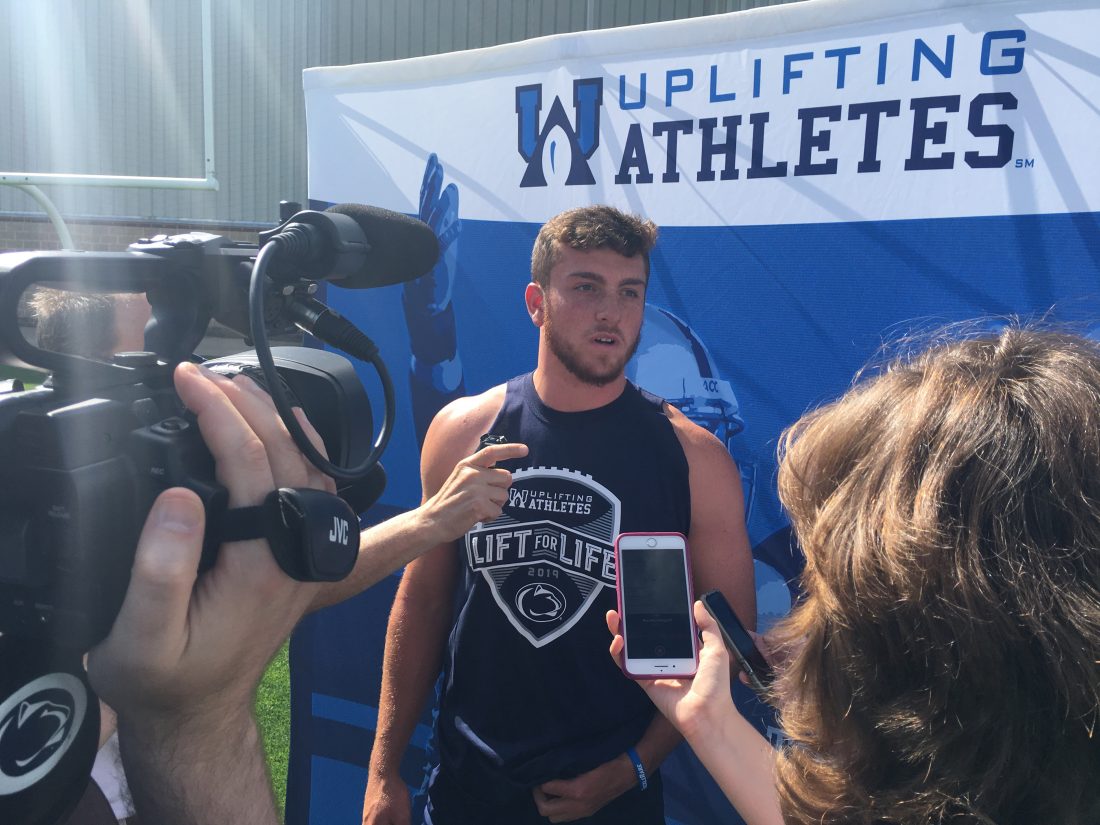 UNIVERSITY PARK — Leadership doesn’t come naturally for everyone. Some people shy away from it, while others seek it out at every opportunity.

While he’s doing everything he can to prepare himself on and off the field to be Penn State’s new starting quarterback, Sean Clifford decided to take on another major challenge.

The school’s Uplifting Athletes chapter needed a new president, someone who could carry on the organization’s tremendous tradition. Among other things, Uplifting Athletes puts on Lift for Life, the enormously successful fundraiser that held its 17th annual event Friday evening.

When Uplifting Athletes needed a new leader, Clifford stepped up and met the challenge head on.

“Everybody talks about a quarterback being the leader, and this was just one thing that I saw as an opportunity, so I went ahead and took it,” Clifford said Friday. “I’m really happy that I did because it’s been a blast doing it with everybody.”

By no means is it easy being president of Uplifting Athletes. How much work does the position have to take on?

Trace McSorley was co-president of Uplifting Athletes last year, but rarely has that title been held by a quarterback at Penn State.

“I took this position right when I had the opportunity,” Clifford said. “Trace actually was a president of Uplifting Athletes chapter, and it was one of those things I thought would be a good idea to take a leadership position, especially as a young guy.

That’s just the kind of person Clifford is — a leader who looks to take charge and does everything in his power to succeed.

We don’t know yet what kind of quarterback he will be for Penn State. But we do know that Clifford already has become the focal point of the team and a respected member of the squad through his work ethic and leadership skills.

“Obviously he’s got a huge arm,” running back Ricky Slade said. “But I’d say a big improvement for him is stepping into that role being more of a leader, being a more vocal leader.”

Clifford has noticed how his teammates have responded to him as a leader.

“There’s been a lot of confidence from them in me, which I love,” he said. “I love having a team that is confident in you, because when you have your team behind you, there’s no one that can stop you. I love this team.”

When Tommy Stevens transferred to Mississippi State and pretty much guaranteed Clifford the starting job, it set off a chain of events that obviously changed everything for the redshirt sophomore. He’s now THE GUY as Penn State’s quarterback, and it takes some time getting used to all the notoriety and extra demands on his time.

Those challenges are in addition to actually preparing to be a better football player.

When asked how much his life has changed, Clifford replied, “Probably as much as you think it has.

Being the leader and focal point of a major college football program can be exciting and glamorous. But not always.

Everything Clifford does will be scrutinized. Analyzed. Dissected. Even criticized.

There will be endless comparisons to his predecessor, McSorley, one of the greatest quarterbacks in Penn State history.

A big part of Clifford’s success will be learning how to deal with all of the attention — good and bad — while maintaining a laser focus on football.

“I try to shield myself as much as possible from (the outside noise),” Clifford said.

But is that really possible in this day and age of relentless social media?

“It’s tough, obviously,” Clifford said. “But I do my best to just focus on what I need to focus on. Right now it’s getting myself better — mentally, physically, stronger, everything like that — and then making sure that our team is moving in the right direction.”

Clifford is taking on the most rewarding and challenging role of his life, and it’s up to him to be ready for it.

How ready is he?

“Very,” he said. “This is the most confident and the most ready I’ve ever been in my life to play this position.”