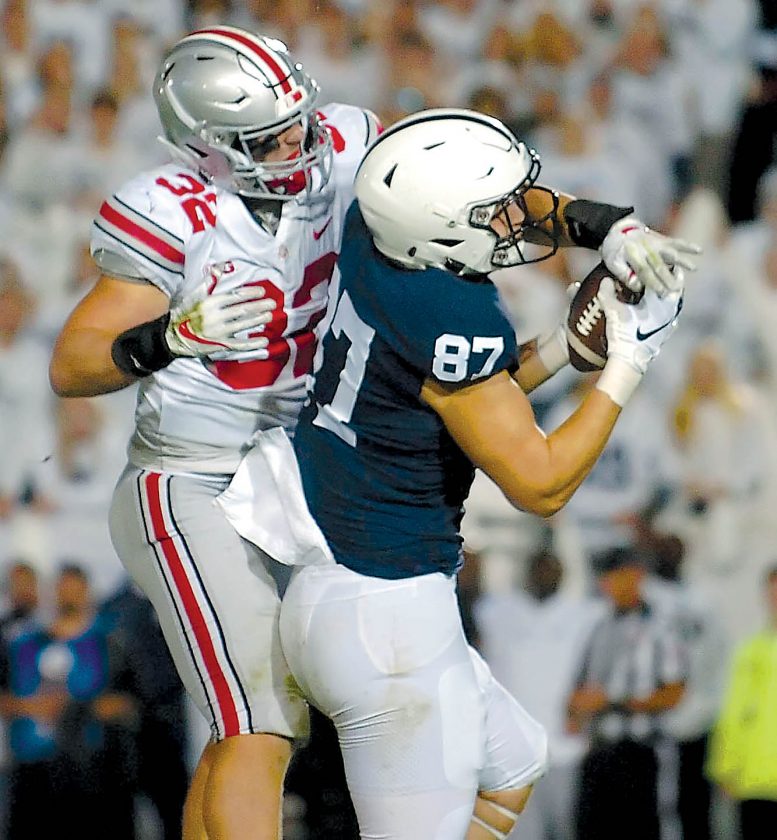 Mirror file photo by Patrick Waksmunski Tight end Pat Freiermuth is expected to be one of the key offensive returnees for PSU.

UNIVERSITY PARK — There are a whole slew of question marks about Penn State’s offense this fall, and rightfully so given the departures of quarterback Trace McSorley and several other key players.

Some of the younger returning Nittany Lions, however, are making some big statements about their expectations for the offense.

“Our offense, everyone’s kind of writing us off,” tight end Pat Freiermuth said. “I think we’re ready to prove the whole country wrong.

“You guys are going to be shocked and surprised about how fast and explosive we’re going to be,” Freiermuth added.

The quarterback then added, “You’re going to see one of the quickest and fastest Penn State football offenses that you’ve seen in a long time. … I think our offense is really hungry to prove that we can be a 400-, 500-, 600-yard offense each and every game consistently.”

Now, young college football players talking during the summertime often make grandiose statements. There’s usually lots of banter about winning a conference championship or even a national title, and so much of it has to be taken with a grain of salt as wishful thinking.

Whether Penn State’s offense truly can live up to such lofty heights will depend on many factors.

First and foremost, obviously, will be how Clifford handles his job, replacing one of the greatest quarterbacks in PSU history.

Clifford played some last year as the No. 2 quarterback, and any experience a young quarterback can get is valuable. Even Clifford, though, pointed out one drawback to most of the reps he got.

“It was a lot of garbage minutes, fourth quarter, that type of thing,” he said.

Clifford has a big arm and the look of a good passing quarterback. Only time will tell if he can deliver all the throws he has to deliver in real game situations, and the sophomore could have as many as three years as PSU’s starter (unless he turns out to be so good that he can go pro a year early).

What many people want to know is whether Clifford has the footwork and running skills to complement his big arm, which will be necessary to make the Lions’ RPO offense spectacular, as it was for much of McSorley’s tenure.

“I came in here, I was mostly just a passer, if I’m being honest,” Clifford said. “But I think that I’ve added a whole new dual threat type to my skill level. I’m really excited to just show it off.”

“Obviously in our offense (the quarterback has) to run the ball,” Clifford also noted. “With an RPO offense in general, it’s run-pass-option, you have to be able to do all three. For me, I’ve just taken that and tried to add that to what I have already.”

Clifford will have impressive weapons at his disposal to throw to.

Redshirt freshman Justin Shorter was the most highly touted receiver recruit of the group and is capable of big things if he lives up to his potential.

Potential is the key word in all of this. The Lions had potential at receiver entering last season, with a group led by Juwan Johnson, but PSU finished among the nation’s leaders in dropped passes. That crushed the offense at times.

Tailback Miles Sanders is gone to the NFL, so the job now goes to Ricky Slade, who was impressive during his opportunities last season.

Slade said there will be “no dropoff” from McSorley to Clifford.

“Our offense is going to be good,” Slade said. “We’re still going to be high-powered, fast, putting up points.”

With Ricky Rahne taking over as offensive coordinator, the Lions put up a ton of points early last season, averaging 55.5 per game through four contests. But the second half of the year was a different story, as the offense averaged just 24.1 points in the final nine games.

McSorley was battling a knee injury for several of those games, limiting the offense. Rahne needs his quarterback to be able to run to make the RPO system successful, but keeping the quarterback safe while running also has to be paramount.

Which brings us to the offensive line, which has to replace starters Ryan Bates and Connor McGovern, both of whom left early for the NFL.

For Penn State’s offense to come remotely close to the kind of success predicted by Freiermuth and Clifford, the line will have to give the new quarterback time to throw and open up running lanes for the new tailback Slade.

“There’s huge confidence. Everybody in the program believes in our O-line,” Slade said.