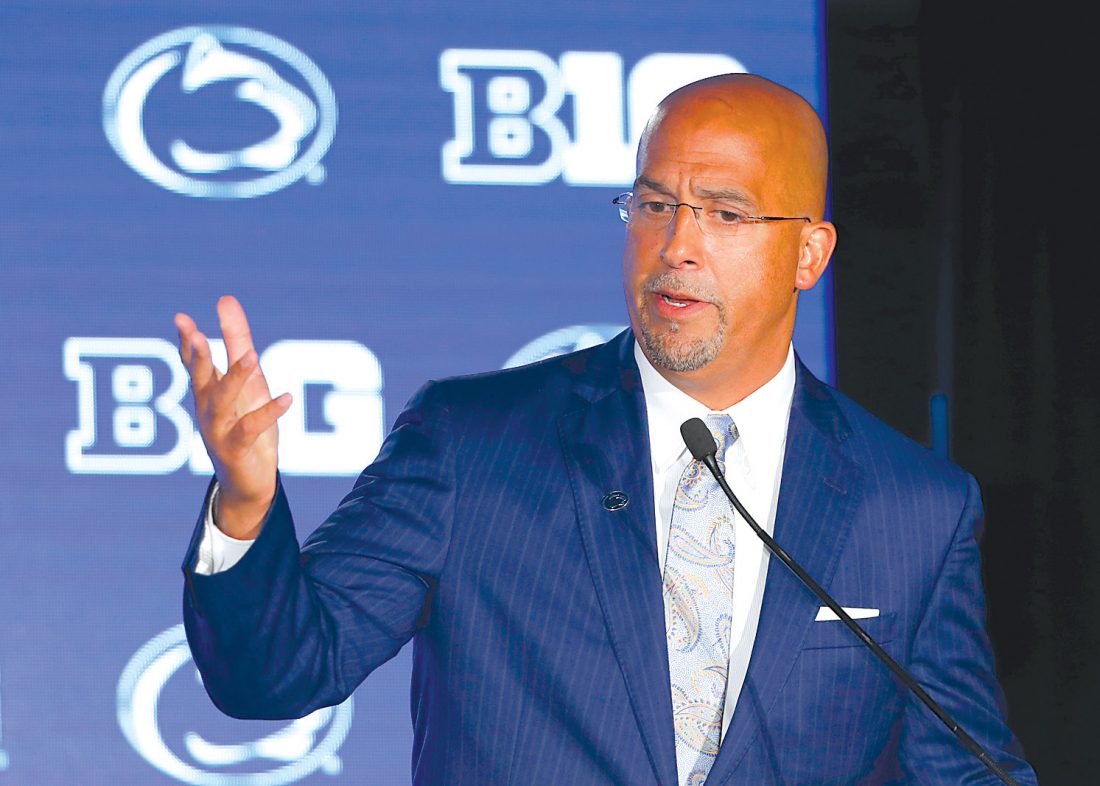 CHICAGO — Penn State has made huge progress during James Franklin’s tenure, and the coach can to point to many areas when discussing the strength of the program entering his sixth season.

Still, some comments he made about not being elite following last year’s gut-wrenching 27-26 loss to Ohio State continue to circle back on Franklin, who once again had to answer questions about those words Friday during Big Ten media days.

The coach later added, “We’re a great program. We lost to an elite program.”

Franklin’s comments, even if correct given Ohio State’s strength on the national stage for decades, have been criticized by many.

Why would he purposefully say the Buckeyes have a better program than Penn State, something Ohio State can use to its advantage in, say, recruiting against PSU.

Also, by promising to someday become an elite program, Franklin established a bar very, very high, which can only bring more criticism back on him if the Nittany Lions don’t reach those lofty standards.

Franklin, of course, was asked again about the “elite” comments Friday.

“I think a little bit of that comment was misinterpreted,” the coach told reporters in Chicago, according to published reports from various outlets.

“We’re at a point as a program where I think a lot — maybe 90 percent of the programs across college football — would like to be where we’re at,” Franklin said. “But we need to take the next step, there’s no doubt about it.”

Franklin also added, “You look at us the last three years, we’ve been as competitive with Ohio State as anybody in the conference. We were able to win one year (2016) and lost by one point two years in a row, which is heartbreaking.”

Defensive end Yetur Gross-Matos has a chance to be a superstar at PSU, and running back Journey Brown is expected to get a lot of opportunities this fall.

Both players, however, have been suspended from the Lions for the summer following a violation of team rules. Franklin said they are both on schedule to rejoin the team Aug. 1 for fall camp.

Franklin did not specify what the suspensions were for but did note the two players have been suspended since the end of spring ball.

Even though the players have been serving suspensions, they have remained in contact with the Penn State coaching staff.

“I talk to (Gross-Matos) all the time,” Franklin said. “He’s doing great, working out with the family, doing really good.”

Franklin also had good words to say about Brown, who will compete with Ricky Slade for carries this year.

“It would not surprise me if he has a breakout year,” Franklin said. “He has an unbelievable body. He’s big, strong, fast, explosive, and the game is coming more naturally to him. He’s starting to play with the speed and athleticism that he has, and he’s just maturing and growing up.”

As numerous Penn State players have said lately, this team has a lot of speed across the field.

“We are young, we are talented and we are probably the fastest football team that I’ve been a part of in my nine years as a head football coach,” Franklin said. “So we’re excited about having that speed and athleticism on the football field.”

One interesting topic brought up was whether Penn State would consider selling naming rights to Beaver Stadium.

She also added, “I think that some corporate sponsors or naming of any sort are more appropriate than others. But yeah, we’d take a look at it, absolutely.”

Penn State has raised more than $46 million this year, Barbour noted, for the athletic department. That will allow for upgrades to several facilities across campus.

There could be work getting started on Beaver Stadium within the next year, as well. The stadium is in need of some major upgrades, and the school has been raising money for that purpose for several years.

“We’re not going to do the stadium all at once,” Barbour said. “You have to design it and then determine what the funding is. We’ve been in it. We’re constantly in it. I think in this next year, we’ll probably be ready to take the next step.”

There are some big changes to parking around Beaver Stadium for the upcoming season, and some fans may be concerned about how it impacts them.

Barbour said the school has taken necessary steps to help make the process go as smoothly as possible.

“Will there be some challenges? Of course, there absolutely will be,” Barbour said. “But number one, I’m exceedingly confident in the intelligence of our community to be able to pick this up. Then secondly, I’m even more confident that once we settle into this, I think folks will absolutely see this is a solution to some of our challenges.”

Penn State was picked to finish fourth in the Big Ten East in an annual media poll conducted by Cleveland.com.