With clouds in Columbus, PSU in ‘good place’ 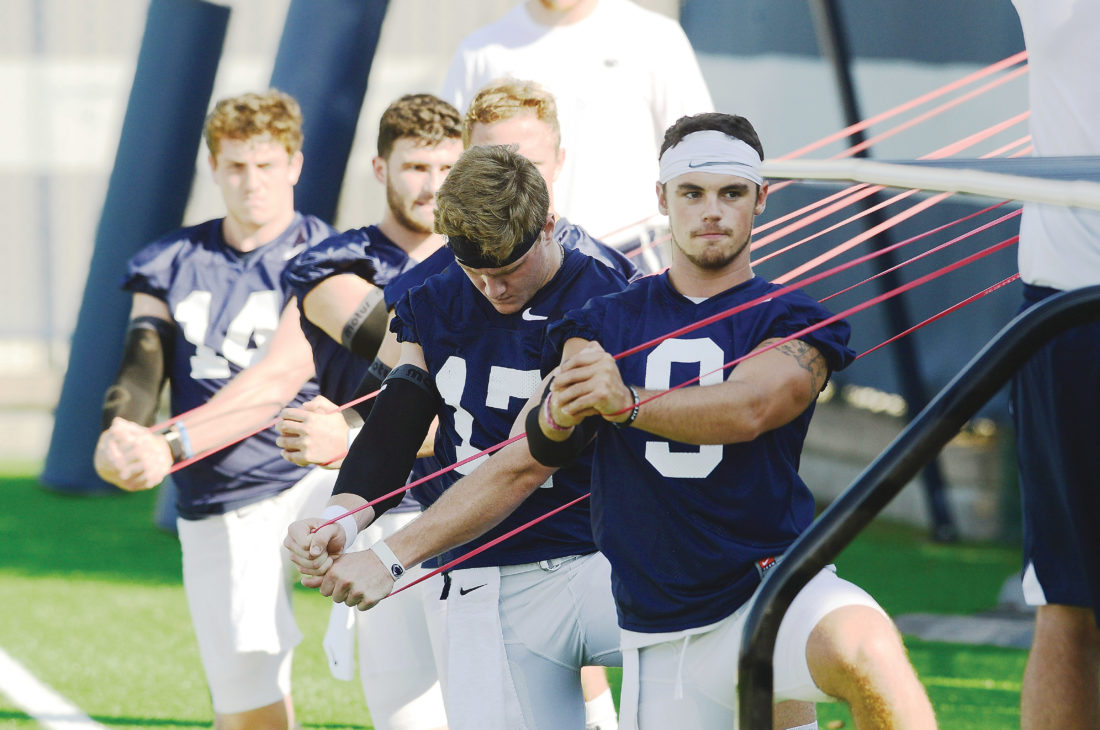 That includes what’s currently going on in Columbus.

In case you’ve been in a cave, Ohio State — the Big Ten’s flagship program – has been weighing whether Urban Meyer will remain the Buckeyes’ head coach after last week’s ugly allegations surfaced that Meyer covered up an assistant coach’s abuse reported by the assistant coach’s then wife.

Though incidents were investigated in 2009 while the assistant, Zach Smith, was with Meyer at Florida, and again in 2015 at Ohio State, Smith was employed in Columbus until two weeks ago.

Franklin didn’t spend a lot of time on the topic during Saturday’s media day, but he did acknowledge it and mentioned that he discusses with his team such situations “all year long.”

Moments earlier, in describing running back Miles Sanders, the heir apparent to Saquon Barkley’s tailback throne, Franklin — perhaps ironically — talked in generalities about the challenges of managing a roster of college boys growing into men.

“Like a lot of us, as males, there’s a lot of maturing to do,” he said. “I tell people all the time, males — and speaking for myself — we’re pretty much idiots until we’re 35 years old.”

“Every time we have a meeting, before we get into football, he (Franklin) puts down things that are happening across the country that are negative and how we can learn from them,” senior linebacker Koa Farmer said Saturday.

Senior safety and defensive captain Nick Scott said the Buckeyes’ situation was not dwelled upon, but it was noted.

“It was no stranger to anybody,” he said. “It’s been up everywhere. I feel bad for the woman who felt that she was abused. My prayers are extended to her family. He (Franklin) said to have thoughts for her family and be cognizant of the choices we make.”

In addition to the impressive on-field progress Franklin’s tenure has shown — 22-5 in the last two seasons with consecutive Top-10 finishes — his players have toed the line and stayed off the police blotter.

So his messages have been heeded.

Asked about his highlight of the summer, Franklin worked in another frequent reminder to his team, saying, “The ultimate responsibility is to be good husbands and fathers.”

It wasn’t a direct arrow into Columbus, but it could have been aimed that way.

With Ohio State in the midst of its firestorm, one can’t help but roll back the tape seven years, to 2011, when Penn State’s world was collapsing under the awful weight of the Sandusky scandal and its alleged cover-up.

Ohio State promptly put Meyer on paid administrative leave, which is what Penn State could have done with Joe Paterno — rather than firing him at 10 p.m. in what made a horrendous situation even worse and led to a student riot and a fractured alumni base.

And here’s more irony: During the 2011 season, after Meyer’s resignation from Florida when he spent the year as a TV analyst, there was more than a little speculation that he had been anointed to succeed Paterno.

In fact, during one broadcast, he slipped and called the Nittany Lions “we.”

But then the Penn State roof caved in, and Meyer took the job at Ohio State, his home state, where his roots were deep.

Had he gotten the Penn State job, it’s certainly conceivable to think he would have brought along Smith, the grandson of former Buckeye coach and Meyer mentor Earle Bruce, with him.

Just imagine if another scandal engulfed the Nittany Lion program.

Instead, Penn State wound up hiring Bill O’Brien — who can never, ever get too much credit for the way he managed the Lions through the NCAA sanctions — and then Franklin, who picked up where O’Brien left off and guided the Lions to Big Ten and Fiesta Bowl championships in the last two years.

Ask yourself this morning: Which program, today, is in better shape — the Lions or Buckeyes?

Meyer may somehow dodge these bullets and save his job, but he can’t save his reputation, and Ohio State’s major slip could end up benefitting its opponents, the Nittany Lions chief among them.

Even though Penn State must replace some of its best players and leaders — Barkley and Mike Gesicki, DaeSean Hamilton and Marcus Allen — it’s hard to debate Franklin when he assessed his roster and decided Saturday, “We’re in a good place.”

On and off the field, for now and the foreseeable future.

Rudel can be reached at 946-7527 or nrudel@altoonamirror.com

UNIVERSITY PARK — Penn State has long been known for its ability to produce bushels of bonus points, especially ...